Trends in Remittances, 2016: A New Normal of Slow Growth

Against a backdrop of tepid global growth, remittance flows to low and middle income countries (LMICs) seem to have entered a “new normal” of slow growth. In 2016, remittance flows to LMICs are projected to reach $442 billion, marking an increase of 0.8 percent over 2015 (figure 1 and table 1). The modest recovery in 2016 is largely driven by the increase in remittance flows to Latin America and the Caribbean on the back of a stronger economy in the United States; by contrast remittance flows to all other developing regions either declined or recorded a deceleration in growth.

The top recipients of remittances are, in nominal US dollar terms, India, China, the Philippines, Mexico and Pakistan and, in terms of remittances as a share of GDP, Nepal, Liberia, Tajikistan, Kyrgyz Republic and Haiti (figure 2). 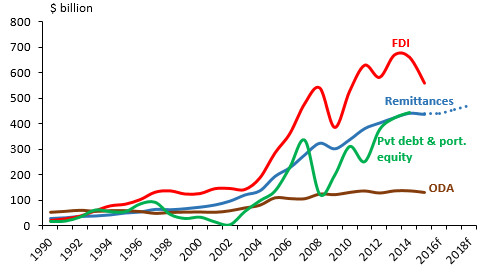 Table 1. Estimates and Projections for Remittance Flows to Developing Countries 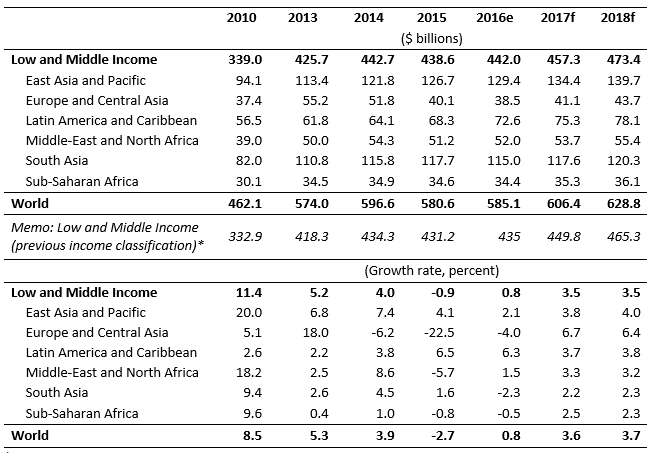 * This group excludes Equatorial Guinea, the Russian Federation, Venezuela and Argentina which were classified as High Income.

Besides weak economic growth in remittance-source countries, cyclical low oil prices have dampened the growth of remittance flows from Russia and the Gulf Cooperation Council (GCC) countries. More worrisome are structural factors such as de-risking by commercial banks, the labor market ‘nationalization’ policies in some GCC countries (that discourage demand for migrant workers) and exchange controls in many countries faced with adverse balance of payments and falling international reserves. Exchange controls in Egypt, Nigeria, Sudan and Venezuela have increased black market premiums on exchange rates, encouraging a diversion of remittances to unrecorded channels. De-risking, the closing down of bank accounts of money transfer operators due to anti-money laundering regulatory risks, has prompted many international banks to close correspondent bank accounts of money transfer operators, disrupting remittance flows.

East Asia and the Pacific: The outlook for remittance flows for the region has worsened due to weak global economic prospects and de-risking, leading to decrease in growth of remittances to 2.1 percent in 2016 compared to 4.1 percent in 2015. The Philippines is likely to see the slowest remittance expansion in the past decade, to 2.2 percent, reflecting a decline in overseas worker deployments. Remittance inflows to Vietnam’s southern hub, Ho Chi Min City, increased by 4 percent during the first seven months of 2016. Pacific Island countries have seen some pick-up of remittance inflows due to strong migrant outflows to Australia, New Zealand, and the U.S.

Europe and Central Asia: Remittances to the region are estimated to fall further, by another 4.0 percent in 2016 after a drastic 22.5 percent decrease in 2015, due to the depreciation of the Ruble against the U.S. dollar and a weak economy in Russia.  Most hard hit are Turkmenistan, Uzbekistan and Tajikistan. Countries where the growth of remittances is expected to be positive in 2016 include Bulgaria (3.9 percent), Montenegro (3.8 percent), Bosnia and Herzegovina (3.3 percent), Serbia (2.9 percent), Macedonia (2.8 percent), Romania (2.7 percent), Turkey (1.6 percent), Kosovo (1.5 percent) and Albania (0.9 percent).

Latin America and the Caribbean: Remittances flows to the region increased during the first eight months of 2016. Two factors are responsible for this: i) Recovery of the US economy, which is in its seventh year of expansion, and ii) a slight recovery in Spain in the second quarter of 2016. Remittances are expected to grow by 6.3 percent and reach $72 billion by the end of 2016. From January to August 2016, the year-on-year growth rates in remittance inflows were: Mexico 6.6 percent, El Salvador 6 percent, Honduras 6.4 percent, and Guatemala 15 percent. In Colombia, remittances from the US increased by 12 percent and from Spain by 19 percent during the first half of 2016.

Middle East and North Africa: Remittances to the region are expected to increase by 1.5 percent in 2016 due to a low-base effect given the 5.7 percent decline in 2015. However, it is expected that remittances from the GCC countries would decline. Egypt, Jordan and Yemen, large recipients of remittances, would be impacted the most. In Egypt, the largest remittance recipient in the region, remittance flows through the formal channels are impacted by further depreciation of the Egyptian Pound and emergence of a black market exchange rate premium.

Sub-Saharan Africa: Remittance flows to the region are projected to decline by 0.5 percent in 2016, compared to the 0.8 percent decline of 2015. Faced with weak earnings from commodity exports and other balance of payments difficulties, many countries in the region – Angola, Nigeria, and Sudan, for example – have imposed exchange controls. Nigeria, which accounts for two-thirds of the regions’ remittance inflows, is projected to register a decline of 2.2 percent in 2016 following a 1.8 percent decline in 2015. A significant parallel market exchange rate premium- in September 2016, the market rate was around 450 Nairas/$ compared to the official rate of around 320- has dampened flows through the official channels. Flows to Nigeria, Somalia and other countries in the region are also impacted by a disruption to the services of many money transfer operators due to de-risking behavior by international correspondent banks.

UN Summit on Large Movements of Refugees and Migrants

On a related note, the year 2016 marks an important turning point in global migration governance: the United Nations General Assembly (UNGA) hosted a summit meeting, on September 19, to address large movements of refugees and migrants, and welcomed the International Organization for Migration (IOM) to become a UN-related organization. The New York Declaration on Refugees and Migrants proposes two global compacts: A Comprehensive Refugee Response Framework and a Global Compact for Safe, Orderly, and Regular Migration. Negotiations on both compacts are expected to continue through 2017, with final adoption expected in 2018.

Ahead of the UNGA Summit, the World Bank Group released a paper “Migration and Development: A Role for the World Bank Group”. The paper provides an overview of the economic benefits and challenges associated with migration and highlights a role for the International Financial Institutions in four areas: i) financing migration programs; ii) addressing the fundamental drivers of migration; iii) maximizing the benefits and managing the risks of migration in sending and receiving countries; and iv) providing knowledge for informed policy making and improving public perceptions.

The multi-faceted nature of migration will require partnerships with other UN organizations, multilateral development banks, civil society, and the private sector. Viewing migration through the lens of reducing poverty and sharing prosperity while respecting human rights can provide a unifying framework for operationalizing the Bank Group’s knowledge on migration and mobilizing its financial resources and convening power.

Also, on September 20 2016, the United States hosted a Leaders' Summit on Refugees. The outcome of this Summit include: i) an increase of funding to humanitarian appeals and international organizations by approximately $4.5 billion over 2015 levels; ii) almost doubled the number of refugees through resettlement or other legal pathways in 2016; and iii) access to education for one million refugee children globally and access to lawful work for one million refugees globally. President Obama also announced the launch of the World Bank’s new Global Concessional Financing Facility.