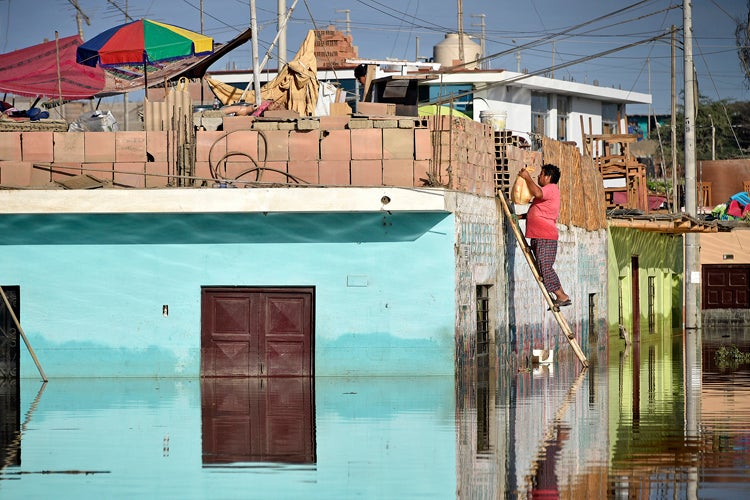 Just ahead of this year’s anniversary of the Indian Ocean tsunami of 2004, I visited the Tsunami Honganji Vihara site in Sri Lanka where upwards of 2,000 people died when their train was destroyed by the force of the waves. Shortly after my visit, Sri Lanka was faced with an unusually large tropical cyclone that pummeled the capital of Colombo, and caused extensive flooding, power failures and infrastructure damage. And, a few thousand miles away, Bali’s highest volcano, Mount Agung, was threatening to erupt, causing considerable anxiety in Colombo that it could trigger another tsunami event of the same magnitude of the 2004 disaster.

Upon my return to the United States I learned of the raging wildfires in California causing massive damages.

This year’s seemingly never-ending adverse weather events, exacerbated by climate change, along with adverse natural events such as earthquakes, are negatively impacting critical infrastructure globally. Some might describe 2017 as a global “annus horribilis” for adverse “force majeure” events.

Sobering estimates of the cost to infrastructure from natural disaster

The cumulative impacts of the Gulf and Caribbean hurricane season, the Mexico earthquakes, and events in Sri Lanka and Indonesia, led me to a discussion with David Dodd, President of the newly-affiliated International Resilience Center (IRC) in New Orleans that is sponsored by the United Nations Economic Commission for Europe (UNECE) PPP Center of Excellence. IRC’s vision is to use the power of PPPs to promote strategies that result in collaborative public-private sector collaboration to devise resilience strategies that are proactive and impactful.  David pointed out that (as of mid-December) there were 83 major natural and weather-related disasters worldwide in 2017. With a conservative cost estimate of $15 billion per disaster (Hurricane Maria is projected to cost $100 billion, Hurricanes Harvey and Irma are estimated at $150 billion) the world has reached a cumulative estimated $1.245 trillion in damages to infrastructure and property in 2017.  This number represents more than 1.5% of projected 2017 global GDP of $79.3 trillion.

These statistics are sobering, and with an apparent uptick in events—of greater and greater magnitude and increasing frequency—it is clear to me natural disaster mitigation and recovery strategies currently being implemented by governments across the globe are unsustainable and fall short in their effectiveness.

We should find it difficult to understand why regions hit by Hurricanes Maria, Harvey, and Irma, should still be struggling to recover and regain basic quality-of-life resources, such as safe drinking water and electricity with all the resources and innovation available today. Finances play a role in the delays in recovery efforts and this has resulted in many asking: who will pick up the tab to recover and rebuild?

At a recent workshop on coastal resilience organized by the Wilson Center in Washington D.C., it was noted that the insurance industry (both government and private sector players) is rapidly reaching an adverse weather event risk-aversion level that could lead to refusal to insure new infrastructure that does not accommodate resilience best practices. This possibility has serious implications for the funding and financing of future infrastructure. Unless addressed, governments will be unable to take on financial responsibility for “force majeure” risk in the future if they occur more frequently.

Resilience best practices & the need for proactive leadership and partnerships

If infrastructure continues to be damaged and destroyed due to repetitive mistakes that could be easily averted, the global community faces the reality that squandered opportunities will prevent us from reaching the Sustainable Development Goals. Do we want this to be our legacy?

Governments and the private sector must join together to develop proactive strategies that incorporate elements of holistic and comprehensive resilience best practices into the design, construction, financing, and operations and maintenance of all future infrastructure projects—be they procured through traditional procurements or through innovative financing mechanisms such as PPPs.

The global architectural and engineering community has been actively calling for resilience best practices that include the following: Applying these resiliency best practices will require motivation and commitment from visionary and responsible leaders in both the public and private sectors.   In addition to adopting best practices, through a process called future-proofing we can anticipate future events and develop methods to mitigate their impacts to ensure infrastructure does not become prematurely obsolete and retains its longevity and financial sustainability, an important factor to attract investors.

The choice is ours, how many more “annus horribilis” are we willing to accommodate? Let’s embrace innovation in 2018 to bring comprehensive commitment to building resilient infrastructure. Actually, nature needs to be comforted by the super advanced technology .
From time to time we all around the globe hear about natural disasters that cause huge losses in lives
and money . These efforts demand cooperation between the public sectors and the private sectors(PPPS)
within the assigned governments sponsored by the World Bank . We all should do something to preserve
our infrastructures in times of disasters.
Yours Very Respectfully,
Dr. Mohamed Taher Abdelrazik Hamada, Ph.D
*redacted*