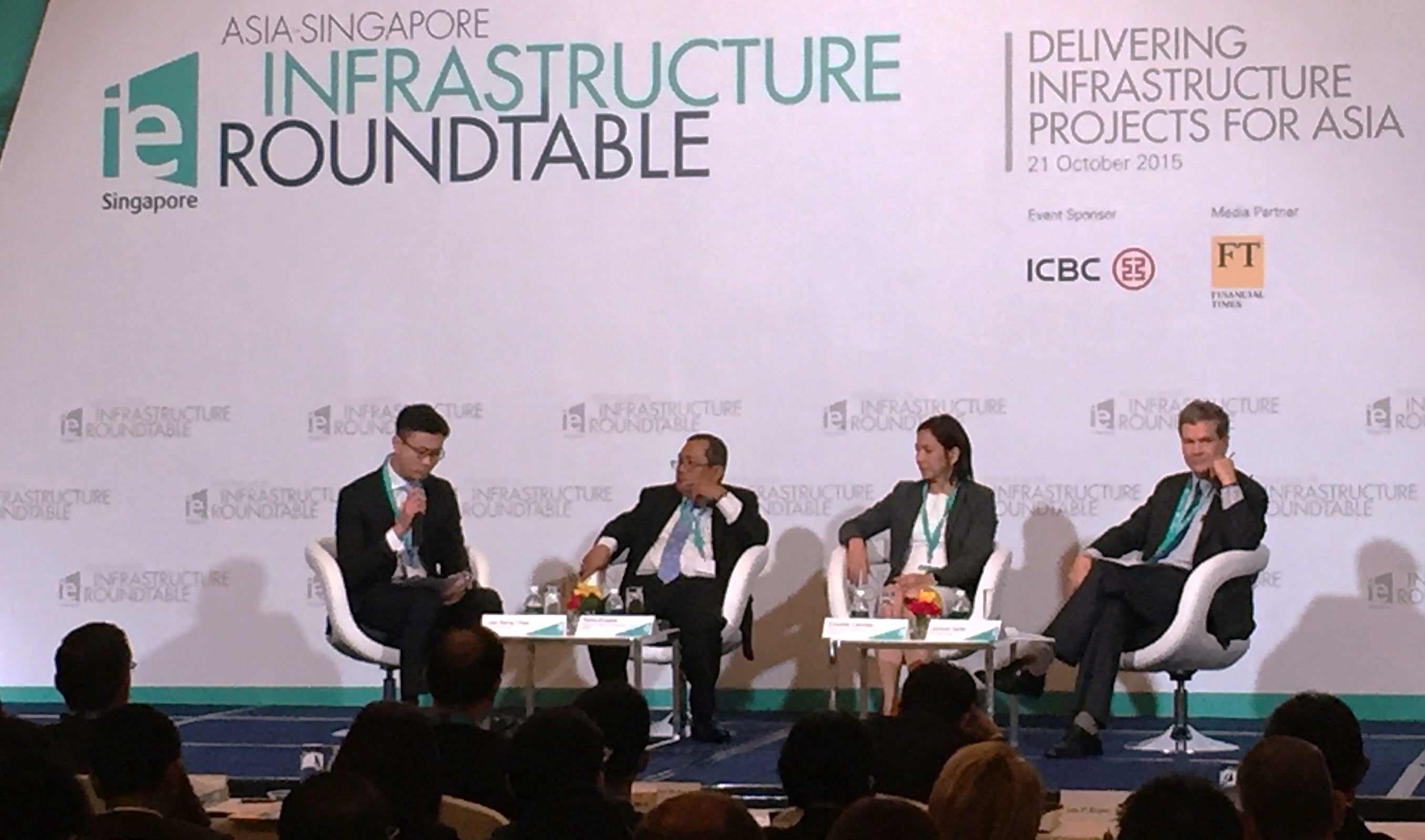 What does one trillion dollars look like? In the most literal sense, one trillion – that’s one million multiplied by one million -- is a “1” followed by 12 zeroes.  For participants in this week’s Asia-Singapore Infrastructure Roundtable, $1 trillion per year looks like how much infrastructure investment Asia needs to maintain its rapid urbanization.

To advise governments on how to get from here to there, Laurence Carter, Senior Director of the World Bank Group’s Public Private Partnerships Group, and other leaders from around the world shared their ideas during high-level strategy sessions.

Developing Asian infrastructure
To initiate a conversation on infrastructure project opportunities throughout Asia and how to bring them to completion, Carter and two other speakers detailed the global context as well as specific, promising approaches to develop a strong pipeline of PPP projects. For background, Carter mentioned that the levels of private participation in infrastructure in the region are low, explaining that the total amount of infrastructure investment is also low worldwide.  As a partial remedy, he suggested that we need to encourage the development of expertise and management – rather than focusing solely on the flow of money – from the private sector.

Standardized contractual language would also be a step forward, Carter suggested. Because major issues recur in PPPs, template text that could be tailored as required would help streamline the process. At the request of the G20, the World Bank developed a first set of such standardized PPP contracts which have been shared with various private sector players in Singapore. He proposed calling them the “Singapore Principles.” In addition, to support PPPs, the World Bank Group encourages a joint approach among development partners.  Carter gave four examples of how the World Bank Group and other multilateral development banks can provide support, including

In the World Bank Group, IFC has a long track record of over three decades of investing and advising in successful PPP transactions in infrastructure and social sectors.  Last year alone, IFC’s PPP transaction advisory group successfully supported governments in the commercial closure of 24 transactions, which are expected to mobilize over $3 billion in private investment. Eight of them were in Asia Pacific. Some of the landmark transactions included the first competitively tendered power IPP in Myanmar and the Manila Light Rail Line one.

Regional perspectives on developing a PPP pipeline Other roundtable speakers shared their national experience of PPP development, both the challenges and the successes. Tamba Hutapea, Deputy Chairman, Investment Planning of the Indonesia Investment Coordinating Board, raised to roundtable speakers and participants the challenges related to streamlining processes and permits which has been a major bottleneck for PPP development in Indonesia.  For example, he mentioned the challenge of reducing the time to provide permits that would result in government’s ability to issue  environmental licenses more expeditiously, and how doing this will play an important role in reducing barriers of entry for developing a strong PPP pipeline.

Cosette Canilao, Executive Director, Private Public Partnership Center of the Philippines, shared some of the key success factors for PPPs in the Philippines, emphasizing the critical role of political support and the importance of developing local capacity. Furthermore she emphasized how the Philippines enacted an executive order to ensure they could hire experienced PPP advisors, and she talked through the process that preceded this development.  Throughout her remarks, she underscored the crucial role the national PPP unit plays in bringing together the different stakeholders. This has resulted not only in past success but in an ambitious ongoing PPP program: the country is launching 14 projects in sectors including airports, water, toll roads, and tourism.

Throughout the question and answer session, the moderator, Lee Seng Chee, Partner, Capital Projects & Infrastructure, PwC Singapore, fielded several questions about the need to develop appropriate government support mechanisms. The panel also stressed the importance of ensuring at the outset that PPP projects have a balanced approach between the risk transferred and government support mechanisms, and the role that permitting, standard contractual clauses, experienced advisors, and other elements of the process play in the development of a more robust PPP pipeline. For more information about Singapore’s infrastructure capabilities, visit IESingapore’s website. Very interesting blog from what appears to have been a good roundtable discussion. I particularly endorse Laurence Carter's suggestion that the development of expertise and management - particularly to define a project, identify its potential cashflow, and evaluate the risks (financial, environmental and social) would release an important bottleneck to attracting more infrastructure investment. My own work on Public Investment Management and country engagements highlights the large capability gap in both conceptualizing and implementing projects in most countries, including those that would be considered emerging.