Looking back: Was the Queen Alia International Airport PPP a success? 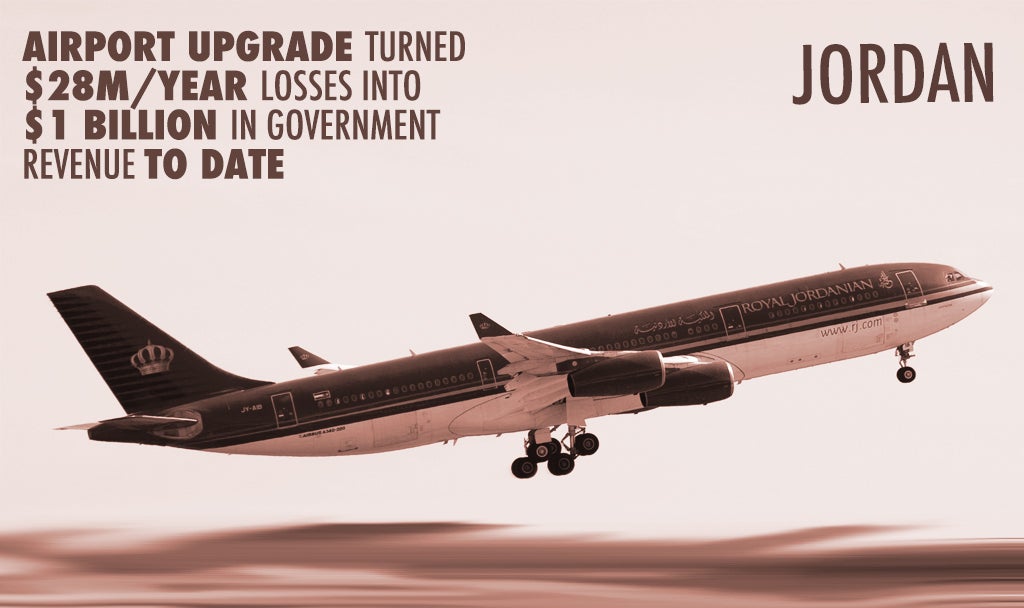 Public-private partnership (PPP) practitioners are sometimes guilty of thinking that signing the deal is the end of the story. You can’t blame them, really. Making a PPP work is a long-term process with a lot of players involved, each with his or her own priorities. Detailed technical, economic, and environmental and social reviews must be conducted to make sure the project is feasible and bankable. Often, sector reforms are required. Stakeholders – including the public – must be kept fully informed. The competitive bid, critical to any PPP, must be fully transparent so nobody will doubt the legitimacy of the outcome. It’s a long, hard slog to the end, and I can’t blame PPP practitioners from wearily planting the flag, declaring victory, and moving on.

But the signing is not the end; it is the beginning. And you can’t really declare success until the PPP is delivering real results for people. Sometimes, a follow-up PPP adds a new phase to a project, and sometimes new players are brought in. In any case, it’s worth going back and examining the results of PPP projects to see what happened and extract valuable lessons.

The Queen Alia International Airport in Jordan, which handles almost all the country’s air traffic, serves as a perfect example. It was built when both air traffic and economic growth was low. But steadily increasing tourism and robust economic growth strained the airport’s capacity. A new terminal was clearly needed, but the government did not have the resources or experience necessary to make it happen. It took on the International Finance Corporation (IFC) as transaction advisor for a PPP, with the tender process successfully completed in May 2007. The 25-year concession was the first airport PPP in in the Middle East and hailed as a big success.

The project took more than five years for the private partners—a consortium of regional and international firms—to complete. But in 2013 the new terminal opened under the consortium’s management. The success of the partnership led to further funding in 2014, arranged by IFC in partnership with the Islamic Development Bank (IsDB) as well as through commercial banks, to expand facilities and services. Why was this necessary? Because annual traffic growth was much higher than expected (7.7% instead of the projected 4.7%).


Was the initial PPP a success? Looking back, we can see that it was. This is why: No surprise, then, that the project received numerous awards, most recently being recognized as the best airport in the Middle East by Airports Council International for two consecutive years (2014 and 2015). Since the PPP, its global ranking has skyrocketed from 186th to 30th.

But there’s more to it than that. The initial PPP model worked, and could accommodate unexpected changes and challenges. This included adjustments to design, which had an impact on construction. The work also took place during the Arab Spring, which could have changed the economics of the project, yet traffic proved resilient and was supported through aggressive airline marketing by the new operator.

A full decade after the initial PPP agreement was signed, we’ve learned some very valuable lessons that are applicable for PPP projects: The story did not end in 2007; nor did it end in 2014. The story has another 15 years to be told. But without a doubt, the Queen Alia International Airport is on the right track. No question that this project is so far a success. I wonder however whether it would have been possible without the significant participation of multilaterals which were able to patiently work through the complex issues that arose, and had the necessary appetite to assume some of the political risks. It would also be useful to understand whether the market risks were fully mitigated with government or MDB guarantees. Market projections are notoriously wrong, a point which was not explained in your note.

Very valid point. Role of IFIs was instrumental given track-record of successful airport PPPs was more limited at the time. It has meant that similar transactions in this space since then have managed to be implemented with no IFI support. Traffic risk was transferred to the sponsors in this case so no guarantee provided, and whilst your comment alluding to the difficulty in coming up with accurate traffic forecasts is quite correct, in this case, actual traffic numbers have actually outperformed forecasts (triggering phase 2 of expansion of the airport ahead of time).

Hi. This is a very good and edu-informative article. I am a PPP practitioner/Transaction Advisor in Kenya and I have learnt a great deal of lessons from this article. Kindly,if possible, send me more informative articles / examples of PPPs around the World. Thank you once again.
Kind Regards,
Bernard.

no doubt PPP concept is a successful strategy to opt... In pakistan we have a green field airport built by the private sector on the PPP model and it has turned out to be a great success.. the airport name is, SIALKOT INTERNATIONAL AIRPORT