In March we released the update from the Private Participation in Infrastructure (PPI) Database for the first six months of 2014, covering investment activity in energy, transport, and water and sanitation. The good news of a rebound of investment commitment from a decline in 2013 was noteworthy, alongside the heavy concentration of activity in Brazil.

The PPI Database’s 2014 full year update for these sectors has just been released, and it confirms the trends we began tracking for the first six months. Total investment in infrastructure commitments for projects with private participation in the energy, transport, and water and sanitation sectors increased six percent to $107.5 billion in 2014 from levels in the previous year. The total for 2014 is 91 percent of the five-year average for the period 2009-13, which is the fourth-highest level of investment commitment recorded – exceeded only by levels seen from 2010 through 2012.


The Middle East and North Africa (MNA) region, while having much smaller commitments of $3.3 billion, also saw increases over the previous year. All other regions saw reductions in investment commitments.  Sub-Saharan Africa saw a particularly steep fall – from $9.3 billion in 2013 to $2.6 billion in 2014 – because of a drop in energy sector activity. However, it’s important not to read too much into this because 2014’s figure was closer to levels seen prior to 2012. The emergence of activities in countries such as Ghana, Kenya and Senegal is particularly encouraging.

The PPI database update for 2014 also focuses attention on growth and activity by sector. The largest number of new projects was in energy, followed by transport, and finally water and sanitation. Although the energy sector had the most new projects, the sector with the greatest investment was transport, which received $55.3 billion, or 51 percent of total global investment. The energy sector accounted for $48.2 billion, or 45 percent, and the water and sanitation sector had $4.1billion, which was four percent of total investment committed. Greater activity resulted from several large-scale projects in Brazil, Colombia, Peru and Turkey. 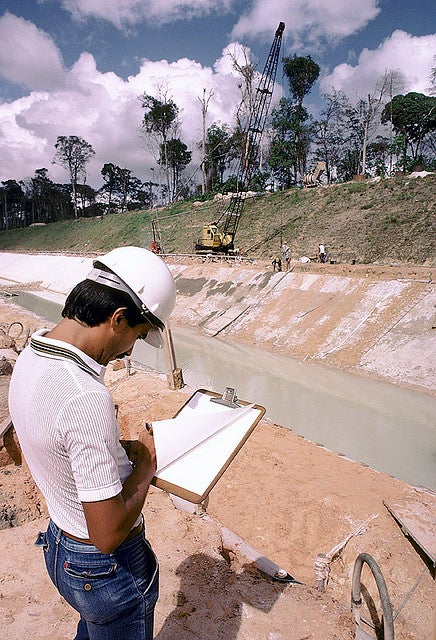 ​Another trend threading through the PPI Database update is the move throughout the last decade toward fewer but larger projects. At 239, the number of projects was the lowest seen since 2004, but at the same time 2014 also marks the highest average project size ever.

As we noted back in March, while there are some positive takeaways from 2014 activity, given rising investment gaps there should be a redoubling of efforts to build policy frameworks and enhance project preparation. Together, these efforts will strengthen the role the private sector can play in meeting infrastructure needs.

We are gearing up to connect with PPP colleagues next week during the PPP Days event, hosted by the European Bank for Reconstruction and Development (EBRD) in London. Together with our colleagues in EBRD, Asian Development Bank (ADB), Inter-American Development Bank (IDB), Islamic Development Bank (IsDB), United Nations Economic Commission for Europe (UNECE), and European Investment Bank (EIB), we are looking forward to our collaboration around PPP activities and in depth discussions around our collective efforts to answer infrastructure needs – globally, regionally and locally.

Curious about PPPs? It’s not too late to sign up for our PPP massive open online course, and join the more than 20,000 participants who are learning about PPPs. We will also have a live Google Hangout from London next week.

Next week will also bring a few more launches, including the PPP Lab, a new web platform for everything PPP, and our revamped Handshake, the World Bank Group’s PPP journal.

Stay tuned for other developments and ongoing PPP news through our Twitter channel at @WBG_PPP. Clive’s chosen title for the post bring us to an undeniable conclusion: The PPP market in Brazil is more active than it has ever been and it keeps generating new deals, even in the fast deteriorating economic and financial conditions the country find itself in.

Such an apparent inconsistency can only be explained by the role played by the country’s National Development Bank (BNDES) as the major provider of long term financing. The Bank provided almost all of the long term loans for this increase activity demonstrated by the PPI Data base. These are the 10 biggest projects that reached financial close in 2014 according to the PPI data base in Brazil.
All of them have either already secured BNDES financing or have almost done so, which typically include 70% of the capital value of projects. Since it subsidizes its interest rates using money from taxpayers, there is no effective private competition.

Although the government is incentivising the use of the capital markets thorough project bonds, the Bank will continue to play an indispensible role for the next round of PPPs announced by president Roussef in a huge political ceremony early this week (https://www.youtube.com/watch?v=PEsAHjl2530). The PPP program considers the following investments that, hopefully, will soon enough be reflected in the PPI database.
All the projects are meant to reach financial close by 2019. Thus, if the announced initiatives effectively turn into implemented projects, despite of the economic conditions of the country, Brazil will continue to rank high in the PPI data-base for the next few years.

Is it possible to outline the specifics in the Energy Sector? Lots of colleagues bunch the "energy" into Oil, Gas and Electricity.
I am interested in the PPI values in Electric Power (thermal, hydro and renewables), specifically in west Africa/Nigeria.
Kindly guide me on this.

I´m public consulting from Northeast of Brasil and we intend to partner public private using the urban solid waste to fuel and energy.
We have talk with some companies around the world and it´s possible , you know ; but the municipals don´t have money enough to implant that system (Pirolysis).
Please give me a good answer for that demand....
I´ve three cities at Bahia , including Salvador(capital) that have agreed to make this partnership.

I'm a government consultant for some municipalities in Bahia Brazil and we want to partner with ppp to treat urban solid waste and transform it into fuel for power generation
We have three cities, including Salvador, that have agreed to make this partnership.
Please help us to get a better life quality..

It seems to me that PPPS focus in many cases on "Transportation"as a way to develop all other fundamental features of economy such as energy, water ,sanitation ,among other aspects, as in the case of Ukraine , and even in Brazil , actually investment in transportation is crucial to all other aspects of
development , that can help to attract private sectors to perform positive activities by PPPS led by the World Bank and all other financial institutions.
Yours Very Respectfully,
Dr. Mohamed Taher abdelrazik Hamada, Ph.D
Retired Professor at Strayer University , USA
I am senior American citizen living temporarily in Egypt because my family lives in America, they are my wife, my two daughters , my son in law , my two little granddaughters . I am willing to be hired by the World Bank , if it is possible , to be able to support myself , support my daughter who is a teenager and to support my two little granddaughters , all of them are in the USA. I already applied to one of the jobs at the World Bank , in the World Bank headquarters in Washington DC. This job is , job number 171270, it's title is Policy Compliance and Grievance Redress, i explained in my application all my qualification and all my experiences , i hope it will fit with the requirements of this job. Please fell free to assign me in any available job at the headquarters of the World Bank in Washington DC, i used to live in Washington DC, to work and study at Howard University , i lived in Washington DC for almost thirty years.
Address
[redacted]