Crowding in funds for the next Steve Jobs from Africa 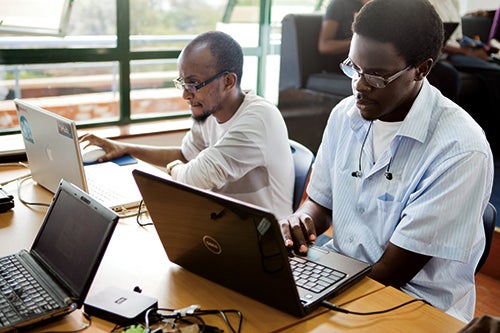 When it comes to financing for entrepreneurs, this week marked a major event in the financial industry of the United States with immense potential ramifications for the developing world. This week, the US Securities and Exchange Commission’s unanimously approved rules for equity crowdfunding.

For context, equity crowdfunding allows entrepreneurs to sell equity shares of their company to a group of investors through an internet platform, and  is a distinct category of crowdfunding apart from micro-finance (Kiva), perks-based (Indiegogo), and debt (Lending Club). The most notable crowdfunding website is Kickstarter which since 2009 has raised more than $840 million, from more than 5 million people, funding 50,000 creative projects. This platform operates on a pre-sale, perks or donation model where funders contribute funds for a future product, reward, or in-kind. Shares or equity were, until the SEC ruling, not part of the deal.

If we hold true that this SEC measure represents a seismic shift in the way entrepreneurs can raise funds in the United States, the question remains, can emerging markets leap frog the developed world to democratize access to finance for entrepreneurs in their countries?

The answer, we believe, is yes.

The latest report by infoDev, Crowdfunding’s Potential for the Developing World www.infodev.org/crowdfunding finds that by levering technology, crowdfunding can serve as an enabling mechanism for new venture formation, job creation and inclusive economic growth. infoDev estimates that the nascent global crowdfunding market, including all models of crowdfunding, could reach between $90-96 billion by 2025, which represents 1.8 times the global Venture Capital industry today.

infoDev, in partnership with Crowdfund Capital Advisors, launched the report last week at the University of California Berkeley’s Academic Symposium on Crowdfunding. In addition to our World Bank report, participants from Google, Kauffman, Harvard, Yale, Stanford, Rotman University in Toronto, and Berkeley showcased other key analysis of crowdfunding which colors the way entrepreneurial finance may change in the developing world.

If the next Steve Jobs were to emerge in Ghana, instead of Silicon Valley, he/ she would not face the same geographic barriers to accessing finance. On average, Venture Capital firms are headquartered within 70 miles of the companies in which they invest. A recent study found that the mean distance between entrepreneur and crowdfund investor is approximately 3,000 miles, potentially unlocking diaspora investment capital and building linkages to isolated entrepreneurial ecosystems.

Women entrepreneurs also stand to benefit from advancements in crowdfunding. Traditionally, angel groups, the most common purveyors of finance for innovative startups, receive only about 9% of proposals from women entrepreneurs and ultimately finance only 16% of those submissions. However, in a study of Kickstarter campaigns, although women sought to raise less money than men, they were markedly more successful in reaching their goal (69.5% success rate versus 61.4% success rate for men.)

These potential benefits for women or isolated communities are exciting, however, leap frogging the successes in crowdfunding by the US, Australia, United Kingdom and others will require a concerted effort of the World Bank, governments and the private sector in three general areas.

First, the World Bank Group, operating in partnership with client governments and other partners, should define clear regulatory frameworks and robust market regulation to yield investor confidence in local financial markets. Second, direct foreign investments, supported by the right policy framework, can support technology and infrastructure environments, i.e. the crowdfunding platforms. Third, World Bank programs such as infoDev with other partners should support entrepreneurship stakeholders at the grassroots level, by offering, for example, training for entrepreneurs, business accelerators, incubators, mentor networks and other service providers.

Our report Crowdfunding’s Potential for the Developing World is about a promise, and maybe in some cases, about a dream. Thanks to a combination of general solicitation and unaccredited funding, high-potential entrepreneurs in developing countries will be able to request everyone to fund their vision.  Let’s put our heads together in the World Bank Group to develop a framework for driving crowdfunding forward in a way that addresses risks and realizes potential.