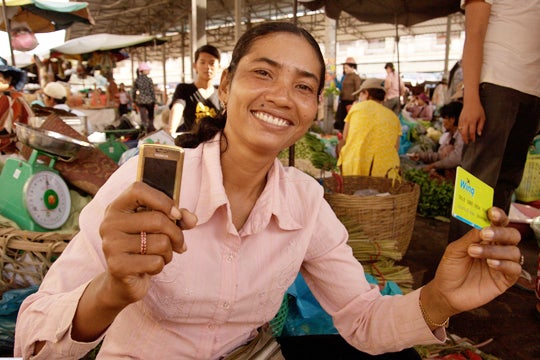 More than half of the world’s population lives in Asia and its robust growth is supporting the world economy.  After weathering well the 2008 crisis Asia is now in the spotlight with currencies depreciating and capital markets in retreat.  One widely voiced concern is rapid expansion of credit in the past decade fueled by abundant liquidity.  Globally, and in Asia, regulatory response to the 2008 crisis has been to strengthen financial regulation and de-risk financial intermediation.  Yet the reality of credit markets in most Asian economies is quite different from that in high income economies.  While domestic credit by financial sector represented on average over 100% of GDP for high income OECD countries, emerging Asia’s average in 2014 stood at 60%. The differences across countries are substantial in this diverse region, but in two thirds of Asian economies domestic credit is less than 60% of GDP.  The reality for most economies in Asia is that of limited and often inefficient financial markets which do not serve fully their growth needs. Low level of financial inclusion is a major contributing factor and a major challenge.


In a recent paper we estimated that in 2011 about 1.5 billion people in Asia or half of its adult population were unbanked – not having an account in a financial institution. Some countries do better than others.  A number of central Asian economies have less than 5% coverage while a number of East Asian economies have coverage in access of 70%.  Uneven access to basic financial services creates disadvantages for the excluded, limits economic opportunity and mobility, and thus exacerbates inequality.

Financial inclusion now features prominently in the global development agenda. The World Bank Group and partners set an ambitious goal to achieve Universal Financial Access (UFA) for working-age adults by 2020. The UFA 2020 goal envisions that adults worldwide will be able to have access to an account or an electronic instrument to store money, send payments and receive deposits, as a stepping stone to full financial inclusion. Many economies in Asia embraced the goal of financial inclusion and adopted national strategies and initiatives.  India committed to provide access to transactional accounts for all adults.  Indonesia, Pakistan and most recently the Philippines launched national financial inclusion strategies.

Using Findex data we can estimate that the number of adults with accounts in the financial system increased by 430 million in Asia between 2011 and 2014, increasing the share of banked population to nearly 60%. The vast majority of the newly banked rely on traditional bank accounts and only about 3% of the increase in the number of banked comes from those using mobile financial services.  Considering the success of mobile financial services in Africa and other regions with limited inclusion, there seems to be an untapped opportunity in Asia. 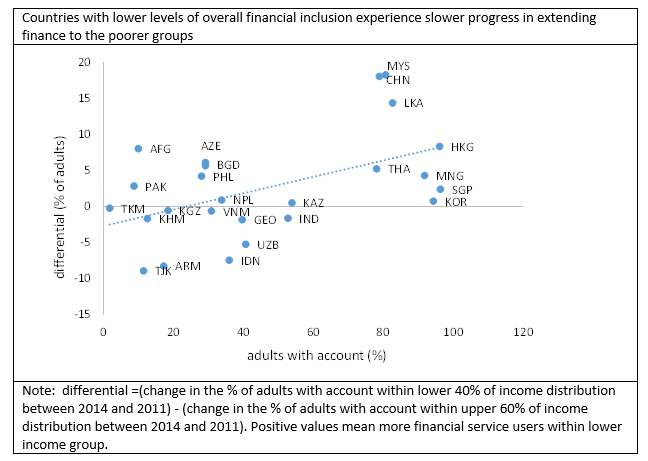 Related to this, in countries with lower level of inclusion the increase in the number of banked often starts with those in upper 60% by income distribution. For example, in Indonesia the share of those with accounts among the poorer 40% increased by 12% and among the richer 60% by 19%. On the other hand, in countries with higher levels of inclusion increase is most evident in the lower income groups. In Malaysia for example, the number of banked among the poorer 40% increased by 25% while the corresponding figure for the largely banked richer 60% is only 7%.  It is not a surprising finding, but it begs the questions of whether financial service providers truly innovate to serve lower end market or are content to gradually roll out services down the market as incomes increase across Asia.

These and other indications from the data we discuss in our brief suggest that there is a large market in Asia for providers of financial services at the lower end of income distribution. Can the mix of new technologies which can transform the financial industry and regulatory reforms envisaged in the new financial inclusion strategies accelerate the advent of universal financial access in Asia? Financial inclusion in Asia – time for disruption?