In May 2012, Alexander Shakaryan’s MicroForester, which is an online platform to stimulate reforestation in designated parts of the world, received the runner-up prize of infoDev and Nokia’s m2Work Challenge. The m2Work competition was a global call for innovators to design jobs that anyone could do from a mobile phone. Three months later, the Armenian developer assesses next steps for his fledgling company.

As an entrepreneur, winning a competition is only the beginning of the tougher part of the journey, which is creating a real company from an idea. You can win a competition with just an idea, but winning investors and customers depends on lots of other things like money, connections, and fame. The m2Work competition was good for local fame, and the m2Work Hackathon will help as well, but more importantly the events show us who the entrepreneurs are and how to help us on our own tough journey. 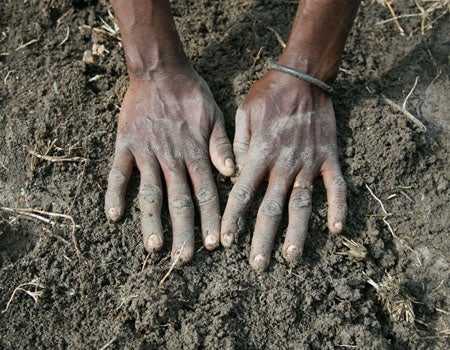 A few months ago I received an email from the Enterprise Incubator Foundation (EIF) about the m2Work contest. Inspired by the idea of microwork and driven by my love for nature, I had an idea for an app to allow people in different corners of the world to use their phones to earn money by planting trees. That was MicroForester.

Since the competition we have put together a great team of developers. We have developed an application for mobile platform iOS. The first trees have already been planted with MicroForester in Yerevan, Armenia. We have a sponsorship agreement with a local leading food industry company, and we also have mining companies interested in financing the project. We have a signed Letter of Commitment with the American Institutes for Research for a future USAID-funded reforestation project in Cambodia.

The more I work on MicroForester, the better I understand that it will take a lot of effort and adequate resources. A very inquisitive child in a family of engineers, I would pepper my parents with questions and passionately watch them work in the workshop. I even had my own responsibilities; my dad would say, "... KT 315, Alex,” and I would look for the transistor from the respective box to pass it over to him. The Soviet magazine Radio was my favorite entertainment, and I would spend hours experimenting and fabricating radio and audio devices. I was indeed naturally inclined to become a technologist, but I didn’t know about the practical side after the engineering is done.

Since I learned about m2Work, I have received a lot of guidance at the mLab Eastern Europe and Central Asia, infoDev’s specialized incubation center in Armenia focusing on mobile innovators. I approached the Deputy Minister of the Economy through an mLab event. .  When I described MicroForester to him, he advised that the project not be limited to planting the trees, but also include watering and caring services. The EIF recommended adding a solid monitoring mechanism.

I believe that m2Work was a big success in raising the awareness about the concept of microwork and collecting numerous new and innovative ideas. I believe many of the ideas from the contest will be brought to life after the m2Work Hackathon, and that strong professional advice and financial help will be of critical importance for the development of these ideas at the initial stage. I know that they were a very important help for me. My team and I are going to work on MicroForester at the Hackathon, but we should also tell the new programmers what we have learned, so that great Armenian companies can multiply and grow, like trees.

Note: As a follow-up to the m2Work challenge, the m2Work Hackathon will bring together mobile developers in five regions to build microwork app prototypes. The apps can then enter directly into an incubation track at infoDev’s Mobile Applications Laboratories (mLabs). The worldwide Hackathon will take place on September 15-16, 2012.

I wish you the successful realization of the project and look forward to new and exciting ideas!