More efficient ways to transfer remittances are emerging. Are migrants and their families ready to benefit from them?

The price of sending international remittances has reached a new record low in the first quarter of 2014. The global average cost of sending money across borders was recorded at 8.36 percent. This figure is used as a reference point for measuring progress toward achieving the so-called “5x5” objective – a goal endorsed by the G8 and G20 countries – to reduce the cost of sending remittances by five percentage points, to 5 percent, by the end of 2014.

Most indexes of international remittance costs – published by the World Bank in the new, ninth issue of the Remittance Prices Worldwide report, which was released on March 31 – indicate good progress in the market for remittances.

Major Money Transfer Operators (MTOs) are also reducing their fees, which decreased to an average of 8.35 percent in the first quarter of 2014 – more than 2 percentage points lower than the peak 10.73 percent reached in 2010.

Cash services remain the most widely available and among the most competitively priced, at just slightly over 7 percent.

However, other product types are gaining ground: Online services are becoming more competitive and are now offered at about 6 percent of the amount sent. Online services generally offer senders different options for paying for the transaction – such as paying from their bank accounts, with either a wire transfer or direct debit, or by debit or credit card. The sender can also choose different ways for the money to be delivered – for example, delivering it to the beneficiary bank account or in cash at agents in the receiving country.

A larger number of account-to-account services has also been recorded. This is generally due to the fact that many MTOs now offer their customers the option of transferring money from their bank accounts to the bank account of their beneficiaries. In the past three years, two of the leading global MTOs have acquired foreign-exchange companies that specialize in sending money to bank accounts.

The biggest challenge for these types of services at the moment seems to be the still-too-low number of remittance beneficiaries holding a bank account on the receiving side of the transaction. While 89 percent adults have a bank account in high-income economies, only 41 percent have one in emerging economies, according to the Global Findex). It is quite common that, while remittance-senders have a bank account in the sending country, their families back in their home country do no – thus preventing the senders from using the full spectrum of services that are available to transfer money on the sending end.

With Project Greenback 2.0, managed by the World Bank’s practice on Financial Inclusion and Infrastructure, we are also suggesting to remitters in so-called “Remittance Champion Cities” – prominent cities that aim to establish best practices – to encourage their beneficiaries to open bank accounts in the home countries. That step can open new opportunities for them to use services that are transparent, safe and competitively priced. You can find out more about Project Greenback 2.0 through our new infographic. 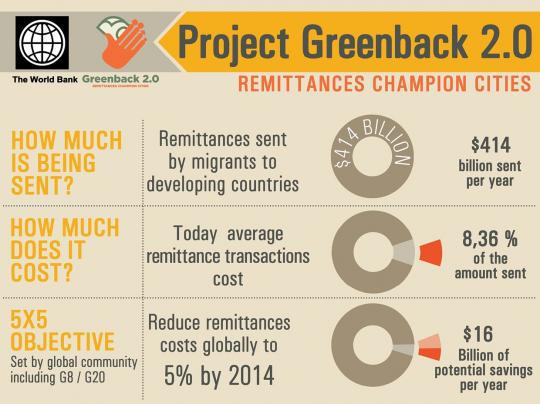