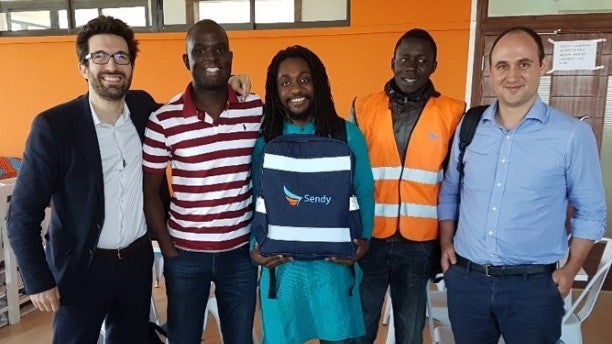 
Like many African cities, Bamako’s population of 2.3 million is growing rapidly by roughly 5% a year. As people increasingly flock to the city, its road network is coming under increased pressure, especially when it comes to public transportation.

Traditional taxis are too expensive for the average commuter and the alternative option, SOTRAMA or public vans, are uncomfortable and slow, overflowing with people on Bamako’s roads.

In many African cities, motorcycle taxis are becoming popular but are still facing the same urban mobility problem.  CFAO Automotive, Toyota’s African subsidiary conducted a market analysis to see if an Uber-like, motorcycle taxi service was feasible in Bamako. The company found that there was huge market potential for a safe, convenient and affordable alternative to the existing options, not just in Bamako but across the continent.

Value for money using Teliman in Bamako:
5 times faster than Sotrama and 4 times cheaper than taxis 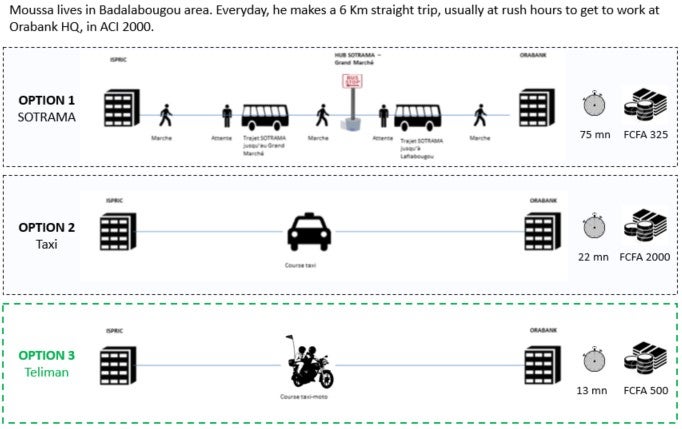 Thomas Gajan, Chief Innovation and Development Officer for CFAO Automotive points to a rapidly-shifting landscape for car manufacturers worldwide. CFAO is exploring options in new markets for mobility services, and bought shares in companies like Sendy, a Kenyan delivery company with a network of over 300 drivers and a mobile app for on-demand courier services. An alumnus of the World Bank Group’s infoDev-sponsored mLab incubator in Kenya and pan-African acceleration program XL Africa, Sendy has been successful, facilitating over 11,000 deliveries a month and recently received funding of $2 million.

Having worked with Sendy and now confident in the market potential, CFAO resolved to develop a motorcycle taxi service in Bamako. The World Bank saw an opportunity to bring together this multinational corporation and Mali’s nascent tech sector and startup ecosystem. The result was Teliman, an on-demand transport mobile app, which has raised $0.7 million from CFAO and local angel investors to date.

Teliman is indeed the brainchild of a World Bank-sponsored hackathon with Mali’Innov, a consortium of Malian incubators, to facilitate open innovation between local start-ups and CFAO. Working with local start-ups is an obvious avenue for large companies because they have all the advantages a big player doesn’t: they’re flexible with their ear to the ground, constantly adapting to change in the market. Right now, 68% of the top 100 companies from the Forbes Global 500 are engaging with start-ups.

“This wasn’t an idea being imposed from the outside: it was a homegrown solution to a problem identified in the local market,” Abdoulaye Maiga, CTO of Teliman. Gajan concurred, adding that he sees the project as a response to social challenges in Mali, creating employment for the youth and stemming the tide of migration to Europe from the region.

Gajan urges the importance of developing a product that a whole community can get behind. “As a private investor, we have the opportunity to bring to the market a product designed and implemented by young Malian entrepreneurs that generates value and employment.”

It was on the issue of trust that Gajan applauded the role of the World Bank in the investment. “In a context like Mali, you need confidence. The Bank really brought that credibility to instill confidence, especially among entrepreneurs. That’s what I mean by shared value: it’s not just about seeing a gap in the market — if you have something good, then the whole ecosystem will support you.”

The hackathon also generated a team of developers for Teliman, including the CTO and several of the founding members, demonstrating the potential of open innovation to attract and identify real talent.

Teliman and CFAO are hoping to both secure a supply of trained and professional drivers and stimulate demand via a convenient app, high-quality service and easy mobile payments. Teliman launched its first drivers’ cohort as a prototype to show that the model is profitable and safe, not only to customers but also to future drivers. By December, a fleet of as many as 100 drivers could be on the road, with another 1,200 planned by the end of 2019.

There are currently 600,000 daily commuters in Bamako: “if we go to scale, we could capture 10% of the market,” says Maiga. In five years, Teliman could create 20,000 jobs for the Malian population. Teliman is a testament to what can be achieved from open innovation and the Maximizing Finance for Development approach. It brought together different actors together to develop a solution to a development challenge.

And that is a self-sustaining form of transit that generates jobs and demand for other services.
Topics
Competitiveness
Urban Development
Countries
Mali
Regions
Africa