Putting $8.7 billion back in the pockets of Asia’s migrants 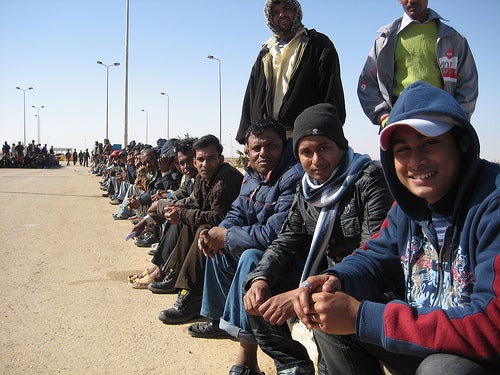 Governments and private sector actions can drive down remittance prices for migrants (Credit: DFID-UK, Flickr Creative Commons)
An estimated 215 million people – 3 percent of the world’s population – have emigrated far from home in order to earn enough to support their families. They include workers from Bangladesh who go to Saudi Arabia to work in the construction trade, Afghans who go to Iran to work in the oilfields, and workers from Burkina Faso who go to Cote d’Ivoire to work on the cocoa or coffee harvests.

Toiling far from their loved ones is not their only burden. When migrants send their money home, they are often charged exorbitant fees, which can account for a large portion of the small sums being sent - sometimes upwards of 20 percent – and can inflict a punishing burden on poor migrants.

In 2012, migrants sent an estimated $401 billion in remittances to developing countries; a number that is expected to reach $515 billion by 2015. Remittances help to cover the cost of food, housing, education, and health care and support small businesses -they have the potential to lift families out of poverty. They also help sustain growth and development in emerging markets, and help countries address balance-of-payments challenges. But, the inefficiencies in today’s remittance system drain away much of their potential benefit, putting a heavy burden on migrants and their families – and on the development process.

Globally, remittance transfers cost an average of 9.05 percent of the amount being sent, which means that, on average, a migrant sending $200 would spend $18 to make that transfer. This is expensive, especially compared to the often low incomes of migrants and remittance recipients. $18 means more than two week worth of income for those who live on the poverty line.

As costs vary across regions, so does the relative importance of remittances. The three largest remittance recipients in the world are all Asian countries; China, India, and the Philippines. In fact, over half of the remittances sent to developing countries in 2012 (approximately $260 billion)  flowed to Asia, and according to some estimates, remittances benefit more than 70 million families. Asian countries also feature prominently in the list of the ten countries where remittances account for a significant chunk of the countries’ GPDs. In Tajikistan, Kyrgyz Republic, and Nepal, remittances account for 47 percent, 31 percent, and 22 percent of GDP respectively.

Despite the low cost of sending money to Asia compared to other regions, the size of the flows and importance of remittances in Asia mean that the impact of any reduction in the cost of remittances could be staggering.

Globally, bringing remittance prices down to 5 percent, which is what the G8 and the G20 are targeting by 2014, an objective known as “5x5”, could deliver more than $15 billion in cost savings for migrants and their families. For those sending money home to Asia, achieving the “5x5” objective would put $8.7 billion per year back in the pockets of Asia’s migrants and their families.

What can be done to lower remittance prices in Asia? An environment that fosters competition among remittance providers is a key element. Governments and the private sector should also work together to create a better regulatory environment for remittances, and develop a stronger payments systems infrastructure to increase efficiency and safety. A number of countries in Asia have already benefited from government reforms. In Sri Lanka, for example, remittance prices have fallen from 10 percent to 5 percent in the last 5 years, at least in part due to Sri Lanka’s payment systems infrastructure reforms. Malaysia’s Money Services Business Act streamlined the legal framework and increased competition while ensuring the integrity of the remittances market. Clearly, Asian countries have improved conditions for remittance senders and receivers and made strides towards the 5x5 goal. But more needs to be done. I hope that discussions at the Global Forum on Remittances will move more countries towards this goal.