International Women’s Day is when we celebrate the strides made towards equality, but it also reminds us that gender is a powerful determinant of economic opportunities, particularly in developing countries.  Financial inclusion is one of the areas where we observe a gender gap—women in developing economies are still relatively more excluded from the financial sector than men, even after controlling for income and education

For the first time, we can quantify this gap using hard data and evaluate how women around the world save, borrow, make payments and manage risk, both inside and outside the formal financial sector. With the release of the Global Financial Inclusion (Global Findex) data, we now have a comprehensive, individual-level, and publicly-available database that allows for comparisons based on more than 150,000 nationally representative adults in 148 economies in 2011. The dataset includes over 40 indicators, but here we’ll focus on three main categories: account ownership, savings behavior and credit. 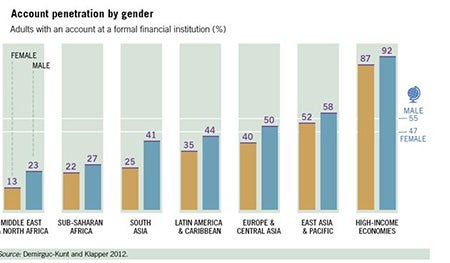 This gender gap is even larger for poorer adults. Of those living below the US $ 2 per day poverty line across the globe, women are 28 percent less likely than men to have an account. The gender gap persists across relative income groups as well: in the developing world, there is a persistent 6 – 9 percentage point gap in account penetration across even among the 20 richest percent of income earners. 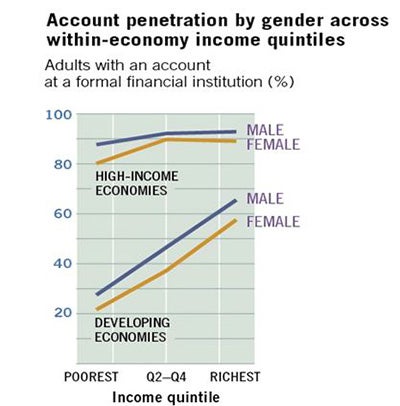 Why do women have fewer accounts than men?

So, why do people, and in particular women, in developing countries have no accounts? For the most part, men and women give the same reasons for not having an account. Two-thirds of both men and women cite the lack of enough money to use an account as reason for not having one (multiple answers were allowed). However, women without an account in developing countries are 6 percentage points more likely than men to say “because someone else in the family already has one.” It’s also the second most frequently cited reason by women for not having an account. For men, on the other hand, this reason comes in fourth, after “too expensive” and “too far away.” In India, for example, 46 percent of unbanked women respondents cited a family member having an account as one of the reasons they did not possess an account. This suggests that indirect account use may be prevalent in India. The lack of asset ownership may have an adverse effect on empowerment and self-employment opportunities. 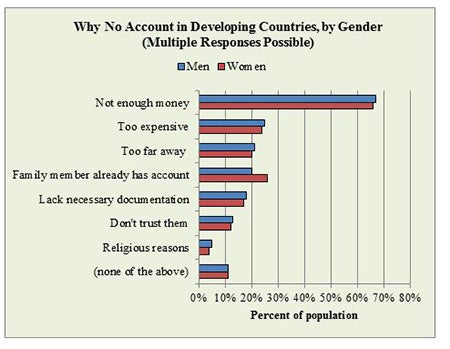 There might be some good news though. When we consider access to an account to include indirect access through a family member, the observed gender gap in accounts at formal financial institutions actually narrows by six percentage points.

Nevertheless, a gender gap remains. And some interesting papers (using randomized control trials) show that providing access to own savings instruments increases consumption and productive investment, especially for women, (Dupas and Robinson, 2009); and female empowerment (Ashraf et al., 2010).  This literature suggests that it’s not enough for women to have “access” to an account, but that women also need to “own” their accounts and saving.

In new work, we document how gender norms can explain some of the cross-country variation in differences to access to finance for women. Using data from the Women, Business and the Law database that codes, among many other dimensions, whether women by law enjoy the same rights with regard to working, being head of household, choosing where to live and inheritance rights, we show that these variable explain a significant portion in the cross-country variation of the fraction of women who have accounts, save, and borrow, even after controlling for GDP per capita.

In its current form, the value of the Global Findex data lies in benchmarking, diagnostics, and cross-sectional analysis. However, with the complete updates in 2014 and 2017, the Global Findex will allow users to compare indicators within countries over time. This will allow for a better understanding the impact of financial inclusion reforms and initiatives targeted at women over time.

The Global Findex data were collected by Gallup, Inc. using the Gallup World Poll Survey. The Research Group is building the database with a 10-year grant from the Bill and Melinda Gates Foundation. The complete country- and micro-level database is available through the Global Findex website. This is a good coverage and the database is indeed very useful. I wish to see further expansion in this database.