Why is China ahead of India? A fascinating analysis by Amartya Sen 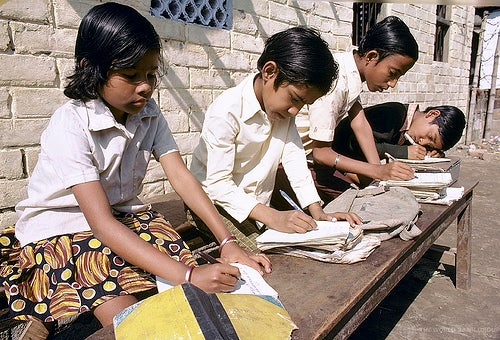 I had the wonderful opportunity to listen to my former professor Amartya Sen at the World Bank who attempted to answer this very pertinent question in the minds of many today. The fundamental question at the core is why is it that while we rate democracy as the better form of government, it is single party ruled China that has been more successful at bringing more people out of poverty than democratic India? The implications for India are clear; investing in education and health for all its citizens is the best solution for long term growth.


Professor Sen argues that it is not the nature of government that is the main factor in China’s success but its investment in health and education that provided fuel to its explosive growth. India he said has under-invested in these key areas and hence its economic growth is poorly supported by quality human capital. Professor Sen was critical of the suggestion that countries could grow economically first and then invest in education later saying that it was the reverse that is true. He supported his claim bringing historical evidence of Japan’s rapid growth since the second decade of the 20st century being driven by its investment in health and education after the Meiji restoration on the 1868. More recently, similar investment by Korea and the South East Asian countries provided impetus to economic growth in these countries.

I wanted to see the evidence first hand and looked at the data. 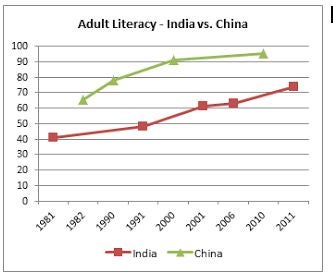 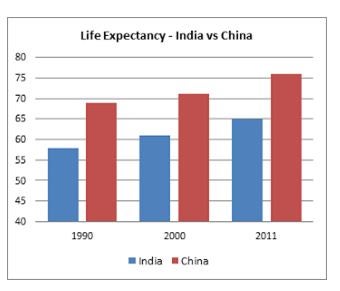 These data supports Amartya Sen’s basic premise that India’s low literacy rates and poor health outcomes as compared to China’s may explain a big part of the disparity in development between the two countries.

You can see the entire talk on the World Bank website. The message for policy makers to India is clear. There are no short cuts to development and that one cannot grow without strengthening the capabilities of each and every citizen how-so-ever poor they may be or where ever they may live however remote. Economic growth needs strong foundations which India currently lacks.

Interestingly, another of Harvard’s economists Dani Rodrik has a different take on this issue he has explained on his blog. He says that governments could bypass the slower route to economic growth of investing in fundamental factors such as building institutions and investing in human capital. He argues that governments who took the route of structural transformation (where investment in manufacturing was predominant) could grow much faster in a shorter span. But that is a discussion for another day.

The discussion by prof sen is a complete replica of what the African countries should adapt in order to get themselves into development paths- in addition to democracy whose absence has caused a lot of conflict. The notion that democracy is not a key reagent for economic growth may not be applied in the African context given the unarrest that its population has shown to leadership that do not conform to the tenets of democracy-Libya may be a case study.
Nonetheless prof sen comments is a good observation on how to grow an economy.

India Inc, by looting astronomical amount public money since more than six decades, has become stinking rich. Loot is shared with People in Power. However, India Inc, leaving apart few rare exceptions, not given back anything to the Nation - India. These people must contribute to social infrastructure for common man use on primary education, health and housing. @BabubhaiVaghela on Twitter.

Agree entirely with you! Would like to add here the policy initiatives need come from the Govt to improve upon investments in Education and Health !

But public investment decisions are made by governments
I was very sorry to have missed Professor Sen’s presentation. Thanks for a summary of it. However, I don’t think that we can delink the policy making with political systems. If the investment in education and health are the key to growth and they are obviously good for the population regardless their impacts on growth, why the democratically elected Indian government has invested less in their own people than the Chinese one-party government? In 2011, Indian public investment in health was 1.2 percent of GDP while Chinese was 2.9 percent.
I should think that the question goes much deeper than the differences in public investments in education and health. The investment decisions, after all, are made by governments. This seems to call for political economic analysis, which is beyond my expertise.

Hello! The thing is in a country like India or Bangladesh not only what the Govt. does for the populace matters in the political process of electing them but also other factors like religion, popular sentiments etc. are important controls in the process. I can give you a very recent example of electing a mayor in my hometown in Bangladesh; the incumbent mayor was the best in terms of doing public works which matters considering last 30 years but the religion card was played against him saying he is not a religious person, doesn't donate to mosques etc. and that played a vital part defeating him. But if you had a system like China where you can filter these sort of thing might be helpful as it shows. thank you!

Hi Jenny, I agree the political economy is crucial. One possible reason is the short political cycle in democracies. Democracies are more likely to spend money on more visible goods such as roads, subsidized fuel, public sector jobs while the benefits from investments in education and health are in the long term and hence less visible.

This is kind of a nice statement, which is somehow devotional towards the great and justifiably adored Amratya Sen. However, it is – in my opinion – oversimplistic, to say the least.....:-)))

Let me make a couple of points. In a democracy like India, the governments tend to take short term views and take actions which will get them re-elected. In 2009, India wrote off nearly Rs 75,000 crores of farmers loans. How much of it reached the deserving receipients is still debated but it helped the party to come back to power. The same spending on HR development would have had a longer term benefit but perhaps does not help in elections. The same is true of food security bill. Prof Sen may not agree but that is the fact.

Professor Amartya has highlighted a very valid point here. I am in complete agreement to this,
"Professor Sen argues that it is not the nature of government that is the main factor in China’s success but its investment in health and education that provided fuel to its explosive growth."

Are Chinese statistics reliable? In 2005, Prof. Sen was giving a lecture in Hong Kong where a former 'barefoot doctor' was in the audience. Prof. Sen mentioned China's great progress in Health during the Cultural Revolution- this is still mentioned in textbooks- but the former 'barefoot doctor' rose up and contradicted the Nobel Laureate. He knew from personal experience that health care in the countryside had been appalling, though no doubt the statistics were rosy which is why they Statisticians didn't get shot.
The fact is that the most vulnerable sections of Society suffered most during the Cultural Revolution. Literacy was linked to survival and life chances in a manner that India has not experienced since the Great Bengal famine.
Prof. Sen is aware that investment in Education has little impact on literacy within most disadvantaged groups. To give an example, in 1919, Champaran, in Bihar, thanks to Mahatma Gandhi's involvement, had more per-capita Schools, better teachers and funding than comparable districts in Bombay Presidency. Yet attendance was abysmal and schools soon closed down. The high quality, idealistic volunteer teachers had to be absorbed into other, equally worthless, Social Work projects.
The truth is literacy added nothing to life-chances, indeed the reverse was the case. There is a myth that monkeys deliberately refuse to speak human language because if they did they would be forced to work. Similarly, a village retainer who doesn't know how to read and write and insists vehemently on his stupidity, gets to shirk a lot of onerous responsibility. Just recently a so called 'head-mistress' of a school has been thrown in jail because the kids were poisoned by their Govt. supplied mid-day meal. This poor lady can read and write. That is why instead of getting a job as a cook, she was classed as a teacher. Since no other teacher was present, she gets the title of 'head-teacher'. If I were her defence counsel, I would get her acquitted by proving she is illiterate.
It is only recently that many Indian aristocratic families have finally decided that it isn't infra dig to be able to read and write. To be frank, illiteracy had strategic value. 'I'm illiterate- hence honest.'
So does being very very poor. If people think you have a bit of money they'll want you to give some to your aged parents, widowed sister, battered wife and bastard children. This compromises your reproductive success.

Indian democracy is caste/religion based. If one compare Infrastructure projects in India and China . India is far behind because of enumerable problems in taking up projects again because of illiteracy and caste factors .The problem will end only when there is one grave yard for one village for all the communities .

Good analysis,If you back out UP/Bihar from the Indian stats you do see overall averages have progressed in past two decades.The fortune of India lies in how these two states Perform.

Outside investments have a role to play here. The developed world has the wealth that can be used to channel development.
India doesn't have control over the nature of investments that come into its country, at least not without constricting the flow of those funds through regulation, particularly with the expatriation of profits and mandatory ownership requirements. Typically its not the presence of those regulations, but rather the risk of politically motivated changes to the regulatory regime that so scares outside investors.
The World Bank has an obligation to see that the developing world isn't saddled with loans from richer governments. Investments in social development might relieve a great deal of rich man's guilt in the developed world if greenhouse emissions are reduced in the developing world (quite a selling point.)
If India--or Africa for that matter--were able to grow in a green way, it won't return as much monetary capital in the short run. ROI is really the chief investment criterion, as long as money managers must be accountable on a quarterly basis. Coupled with the political risk involved in investing in the developing world, quick returns encourage resource exploitation/depletion and environmental degradation in the developing world, speeding climate change.
We need a shift to different means of measuring our economies if the developing world is to grow in a sustainable way, and not just use the metrics of the developed world which are framed around accumulating monetary credits, not social ones.

Why i China ahead of India is a good question. But China was ahead of India even long time ago. http://en.wikipedia.org/wiki/List_of_Chinese_inventions

Isn’t the hypothesis intuitive? I thought so.