The Belt and Road (B&R) Initiative seeks to deepen regional integration by improving infrastructure and strengthening trade and investment linkages along the old Silk Road, from China to Europe. With several infrastructure projects already ongoing, the initiative is expected to progressively reduce trade costs over the coming decades, and hence generate long-run economic gains for B&R economies.


[1] However, deeper integration may also impose costs and losses to these economies, especially in the short and medium run. The exposure to increased competition from Chinese products could challenge local industries. On the other hand, improved access to China’s vast market could benefit the export sector in B&R economies.

In recent research, I used detailed bilateral trade data for the period 1995-2015 to assess the degree of exposure of B&R economies to Chinese trade shocks (see Bastos, 2018). The paper builds on a growing literature seeking to assess the implications of China’s transformation and deeper integration in the world economy for economic outcomes in other countries[2].

The paper examines econometrically the heterogeneous impacts of competition and demand shocks associated with China’s trade dynamics for the exports of B&R economies[3].

Building on these empirical findings, the paper documents the current degree of exposure of each B&R economy to competition and demand shocks associated with deeper integration with China. Although one must be cautious in extrapolating from historical data, the econometric results suggest that the trade similarity indexes contain useful information for capturing the current degree of exposure to China trade shocks. Exposure to competition shocks from China is higher in Hong Kong, Vietnam, Malaysia, Philippines, Thailand and Indonesia. These economies source a relatively large share of imports from China and have an export structure that is similar to that of China (Figure 1). To the extent that differences in export structure reflect underlying differences in production structures, these economies are likely to be more exposed to import competition from China in their own markets in several industries.[4]

Further integration with China would likely involve stronger competitive pressures in final goods markets, which may also have important implications for factor market adjustment (notably labor markets). There are nevertheless various important sources of mutual gains from further integration: consumers would gain access to a wider range of product varieties; firms and countries would obtain efficiency gains due to further specialization in different varieties or stages of production, leading to lower prices. 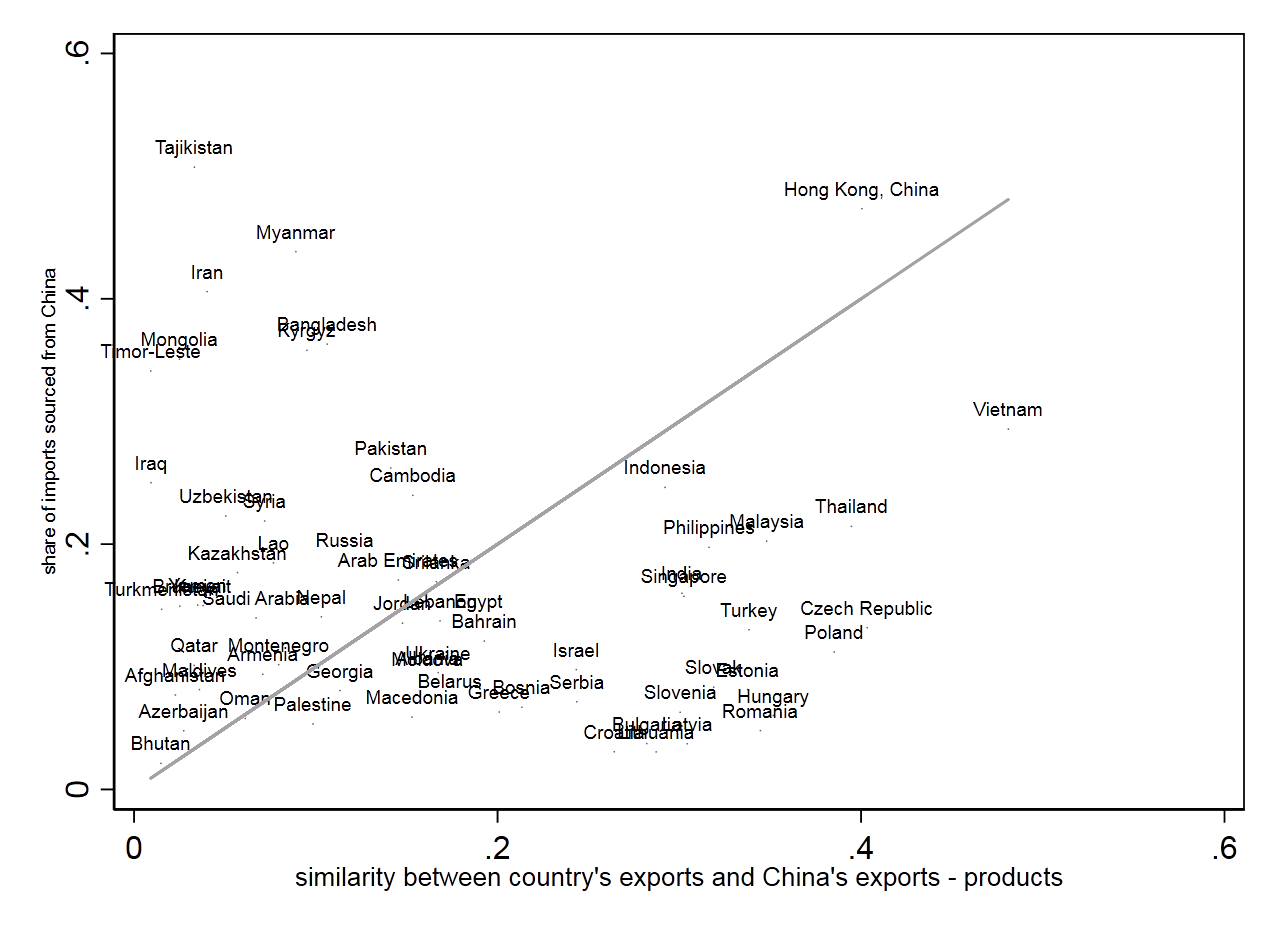 Several other B&R economies are only weakly exposed to competition shocks associated with further integration with China. Tajikistan, Myanmar, Iran, Kyrgyzstan, Bangladesh, Mongolia and Timor-Leste source a sizable share of imports from China, but have an export structure that differs considerably from that of China. To the extent that differences in export structure reflect differences in production structures, these economies are only weakly exposed to Chinese import competition in their own markets, even though they source a large share of imports from China. Mutual gains from further integration with China are likely to derive mainly from further specialization according to comparative advantage.

Exposure to demand shocks from China is the highest in Mongolia, Hong Kong, Iran, Oman, Turkmenistan and Yemen. The Chinese market accounts for a large share of exports of these economies, and their export structure displays a relatively high degree of similarity with China’s overall import demand (Figure 2). China is also an important destination market for Lao, Uzbekistan, Myanmar and Iraq, although the export structure of these economies differs significantly from the structure of China’s overall import demand. Finally, Malaysia, Philippines and Singapore export a sizable share of exports to China and have an export structure that is relatively close to the structure of Chinese multilateral imports, suggesting that these economies are also strongly exposed to China’s demand shocks. 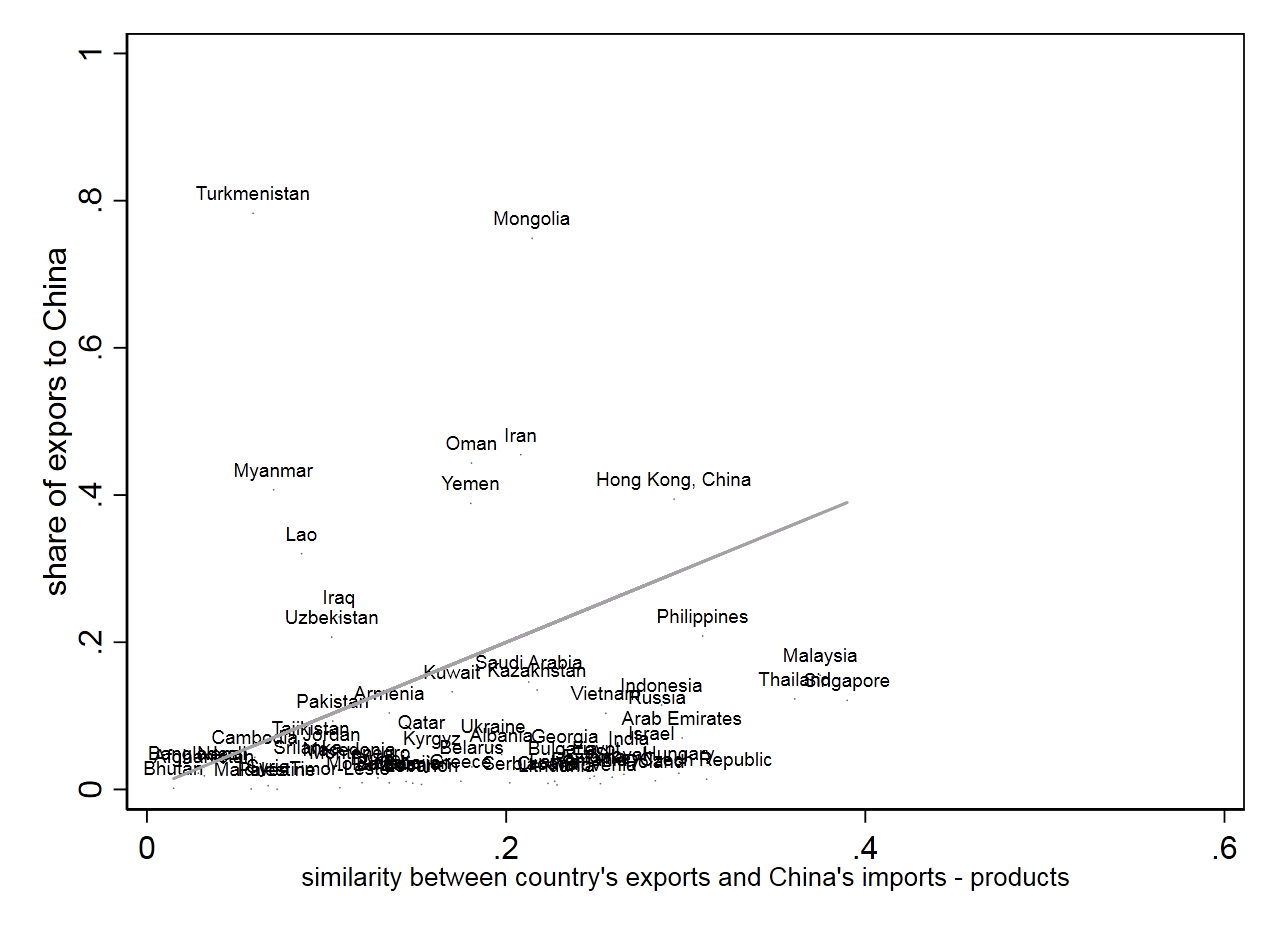 Those B&R economies that are more exposed to competition shocks should consider if their inclusive policies are appropriate to deal with the adjustment costs imposed by trade shocks. These costs are associated with reallocations of workers across sectors, regions and occupations triggered by sector-specific competition and demand trade shocks. Countries more exposed to competition shocks from China are likely to have more displaced workers and therefore face stronger adjustment costs. There is no one-size-fits-all strategy for dealing with trade-induced adjustment costs (IMF, World Bank and WTO, 2017). The optimal policy design depends on the nature of the shock, as well as on country attributes and initial conditions. For example, facilitating geographic mobility may be especially important in larger economies, or when such mobility has been historically lower. The set of policy options to offset these impacts includes general inclusive policies, notably social security and labor policies (including education and training). Well-designed credit, housing and place-based polices may also facilitate adjustment. Trade-specific adjustment programs may play a complementary role.

International Monetary Fund, World Bank and World Trade Organization (2017). “Making Trade and Engine of Growth for All: The Case for Trade and for Policies to Facilitate Adjustment.” Washington DC.


Notes
[1] Gains from deeper integration can have a static or dynamic nature. Static gains are driven by increased specialization according to comparative advantage, a greater concentration of resources in the most efficient firms within each sector, and an expansion in the range of product varieties available to consumers. Dynamic gains may arise from a trade-induced diffusion of ideas and improved access to intermediate inputs, fostering process and product innovations within firms.
[2] In an influential contribution, Autor et al. (2013) emphasize that US local labor markets are differentially exposed to Chinese import competition because of initial heterogeneity in their production structure, and argue the transition of China to a market economy – and the consequent rise of its productivity and trade flows – can be regarded as an exogenous trade shock to those local labor markets. Although the rise of China also boosted global demand, this shock was relatively unimportant for the US. This is because the increase in US imports from China was much stronger than the rise in US exports to China, leading to sizable bilateral trade imbalances. However, this point does not apply generally across B&R economies.
[3] Exposure to Chinese competition at the industry-level is captured by the export similarity index of Finger and Kreinin (1979), using trade data at the product-level for each country pair. This index takes values between zero and one, and the higher its value the closest is the product distribution of exports in the two countries within each sector. Exposure to the global demand shocks associated with China’s rise is measured in an analogous way, exploiting the fact that some countries and sectors initially exported more of what China buys than what China sells. By focusing on both supply and demand shocks, the study also accounts for imported intermediate inputs that are used in the production of Chinese exports.
[4] Economies with relatively higher export similarity with China are also more likely to be exposed to Chinese competition in third export markets.
Topics
Macroeconomics and Fiscal Management
Competitiveness
Trade
Countries
China
Regions
East Asia and Pacific
South Asia
The World Region
Series
Belt and Road Initiative