Understanding global value chains (GVCs) has become an important tool in the World Bank Group’s program to make trade work for development. GVCs involve trade, investment and cooperation among many countries. By taking advantage of recent improvements in global logistics and communications, GVCs also enable smaller and poorer countries to participate in, and derive value from, specializing in parts of the production process of complex and technologically advanced products that would not have been feasible just a few decades ago.


Mapping Country Participation
The World Bank Group’s World Integrated Trade System (WITS) offers a new tool for analyzing countries’ participation in three key global value chains:  apparel and footwear, electronics, and automotive goods.  While these sectors do not exhaust the goods and services influenced by GVCs, they have been widely studied.  They utilize a comprehensive, vetted list of intermediate and final goods in each sector, and offer data that is comparable over time through cooperation between WBG staff and the United Nations Statistical Division.

This new data tool will help researchers by enabling the tracking of GVCs at the sector and product level, revealing their linkages at different stages of the production process and across countries and regions.  It differs from the widely-used approach of tracking GVCs using value-added data derived from global input-output tables in that it provides more disaggregated information for goods, is easier to implement for small countries, and is more accessible mathematically.

Since the GVC numbers have to be aggregated using the underlying trade data it is available under the Advanced Query Module once you login to WITS. If you do not have a username and password, register to get access to Global Value Chains tool and many more features (it’s free)!

In Practice
The default view of the Global Value Chain tool allows users to look at seven GVC product categories:  Intermediate goods in Apparel/Footwear, Electronics, and Autos, Final Goods in Apparel/Footwear, Electronics and Autos, and Final Textiles (these are things like tablecloths, bed sheets, towels and other products made of textiles but not wearable).  The categories can be customized: Footwear and Apparel can be split, and Automotive can be split into passenger vehicles and commercial vehicles such as trucks and buses.  All queries can be done with either Reporter or Mirror data, so all countries can be analyzed.  For example, if exports have not been reported by a country then we can use other countries’ import data from that country as a proxy for their exports.

Suppose you are asked whether Tunisia has potential for exporting electronics.  Selecting Country Analysis allows you to look at the major GVC sectors and their trends.  One quickly finds that while Tunisia’s top GVC sector, final apparel, is in decline, the next two have shown substantial growth.  Exports of Final Electronics have gone from $155 million in 2005 to over $800 million in 2015, and exports of Intermediate Autos (auto parts) have gone from $421 million to $847 million in the same period. 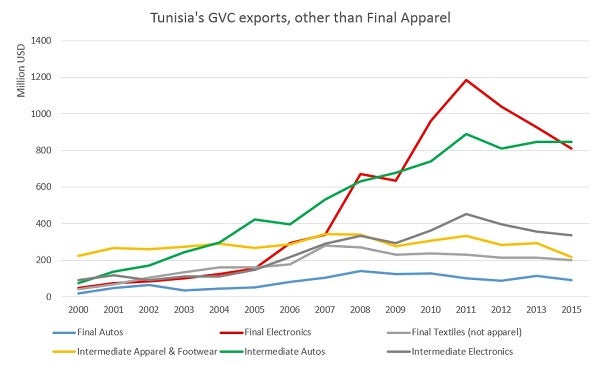 A look at the Products of Interest Analysis shows what goods we are talking about. Tunisia’s main export in Final Electronics is color televisions, and in Intermediate Autos is ignition wiring sets for autos. In another view, we see with a bit of calculation that 88% of the color TVs go to France, while 31% of the ignition wiring sets go to Poland.  Now using France as the country for Products of Interest, one quickly finds that Tunisia, with a 13 percent market share in France, is in a vigorous battle with Slovakia (20%), Hungary (15%), China (12%) and Korea (10%).  Moreover, though the $2.1 billion market for imported color TVs in France in 2015 is half of what it was in 2010, Tunisia is the only one of the top five exporters who has shown growth while the rest have declined.

Having such facts quickly at one’s fingertips can be a springboard for further analysis. For example, in the Tunisia example, after viewing the data, you might wonder several things:  “Why color TVs Tunisia? Who is the lead firm? Where do the parts come from? What about prospects for other markets?” This GVC data can help researchers generate hypotheses or plan informed fieldwork.

Other modules allow users to delve into GVC patterns both within World Bank regions and between regions.  We welcome feedback on the Global Value Chains tool, including any questions and suggestions for improvement, as well as sharing examples of your results.