The Power of Imagery: The White House Celebrates International Trade This Holiday Season 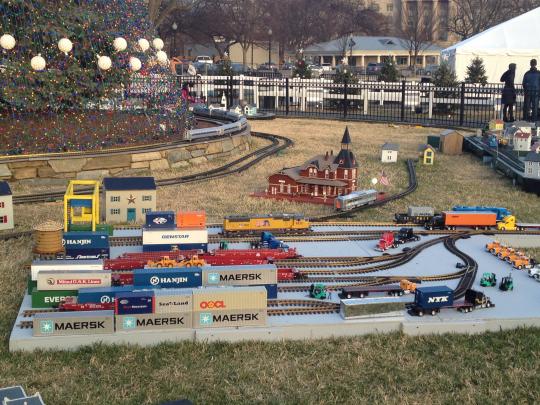 Economists are often considered to be an aesthetically challenged bunch. Yet, as any trade economist will tell you, there is a single visual aid that someone has decided symbolizes all things international trade. To trade economists, this image is inescapable – it seemingly graces every textbook cover, accompanies every policy brief, website, blog post, or article, article, article, or article. There is even award-winning scholarship about it.

The image, of course, is of stacked cargo shipping containers.

As such, the only logical explanation for the White House’s National Christmas Tree Railroad Exhibit, which currently features a prominent display of model shipping containers on the Ellipse in Washington, DC, must be that the United States is signaling yet another explicit show of support for an open and revived international trading system.

This commitment to a modern international trading system follows on the heels of the multilateral WTO agreement reached last week in Bali that analysts indicate could bring major progress on trade facilitation initiatives. It also comes during the United States’ ongoing trade negotiations taking place concurrently under the Trans-Pacific Partnership (TPP) and the Transatlantic Trade and Investment Partnership (TTIP).

Finally, in the spirit of an open international regime for foreign direct investment, it should also be noted that none of the companies featured in the Exhibit – not even SeaLand or Genstar – are (any longer) American. Senior Fellow at the Peterson Institute for International Economics