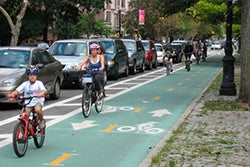 I was excited to read early this week a news dispatch about London’s ambitious bike plan. In announcing this plan, Mayor Boris Johnson outlined his vision of making cycling a part of everyday life by saying, “I want it to be something you feel comfortable doing in your ordinary clothes, something you hardly think about.  I want more women cycling, older people cycling, more black and minority ethnic Londoners cycling.”  To this end, he committed to spend $1.4 billion over 10 years to build bike paths, create bike parking lots, and re-engineer road intersections for bikes, on top of the bike-sharing system that was established in 2010.  Similarly, New York City, during Mayor Michael Bloomberg’s tenure since 2002, has become as recently described by the New York Times, “a cycling haven, with sprawling lanes across each borough and a bike-share program set to begin this spring”. And in Mexico City, one of the world’s biggest cities which is car-saturated, Mayor Marcelo Ebrard began “Sunday morning rides”—known as “Muevete en Bici”—in the mid-2000s, shutting major throughways to auto traffic and giving the right of way to tens of thousands of cyclists.  This measure was complemented in 2010 by the city’s Ecobici program, which offers active subscribers unlimited access to bicycles at different stations for a modest yearly fee.

You may ask why a public health type like me is so excited about bicycles and the introduction of cycle paths as integral parts of the urban transport network?  After all, we are not talking about brand new health centers or hospitals that have been inaugurated in these cities!

The answer is simple.  The redesign of the urban space to facilitate cyclists and pedestrian mobility by rolling out new cycling networks and improving pedestrian walkways as done in London, New York City, and Mexico City, could help reduce negative car-related environmental and health impacts.

Let me explain.  In addition to the growing toll of road traffic injuries and fatalities, traffic congestion and related greenhouse gas emissions contribute not only to climate change and extreme weather events, but also to long-term health problems.  These include chronic respiratory diseases caused by air pollution, and psychosocial and mental health problems caused by traffic noise, congestion, and car driver stress. 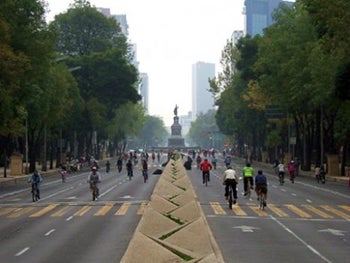 Every Sunday morning, some of Mexico City's busiest thoroughfares are closed
to vehicle traffic to give way to bicycles

In contrast, safe walking and commuting by bike, facilitated by better traffic planning and management, and engineering measures that improve road design by clearly separating pedestrians and cyclists from motorized vehicles, could generate significant health benefits by reducing health risks associated with sedentary lifestyles while making cyclists and pedestrians safer.  Indeed, regular and adequate levels of physical activity in adults lower the risk of hypertension, coronary heart disease, stroke, diabetes, breast and colon cancer, depression and the risk of falls; improve bone and functional health; and are a key determinant of energy expenditure, and thus fundamental to energy balance and weight control.  As documented by the World Health Organization (WHO), lack of physical activity (not to be confused with exercise which is a subcategory of physical activity that is planned, structured, repetitive, and purposeful) is already the fourth leading risk factor for global mortality, accounting for 6 percent of deaths globally.

As rising incomes in developing countries lead to more cars, traffic congestion, and air and noise pollution, perhaps it is time to learn about the wisdom of promoting walking and cycling as part of urban development and transport infrastructure initiatives, as well as of health promotion and disease prevention programs.  Supporting pedestrian-and bike-friendly policies, programs, and investments in cities of developed and developing countries alike would not only reduce traffic congestion and pollution, but also improve the health of the population at different age groups.  These approaches would bring together different sectors and disciplines, involve local communities, and help improve access to services, jobs, and education for disadvantaged groups.  The net result would be a more pleasant and healthy life for all citizens. I think mayor doing the right think by supporting cycling as our daily life routine, through which people will keep their body healthy and fit.