Changing lives along the road in Honduras 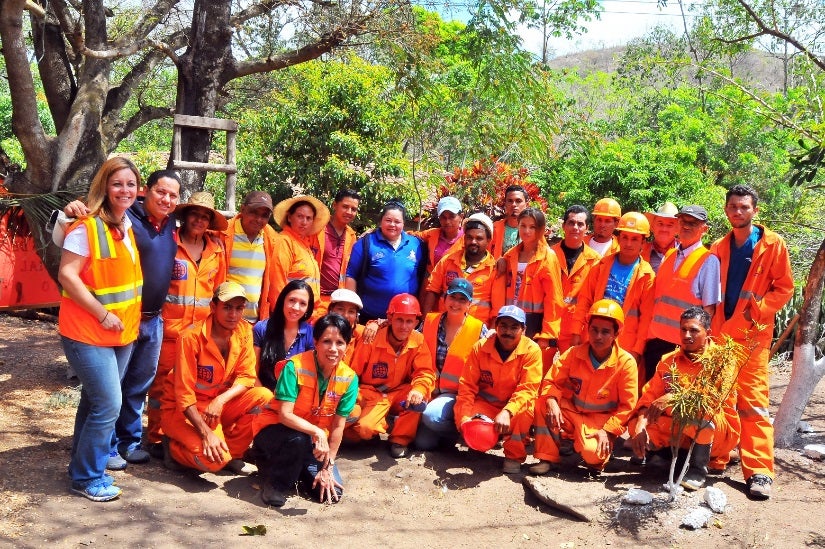 We arrived in the village of La Redonda-El Aguila, Honduras at ten o’clock in the morning, when the temperature was already about 94 degrees Fahrenheit. We were warmly welcomed and invited to take a short walk to the place they had prepared specially for us to hold our meeting. We were offered bean tamales and coffee, and began the meeting with members of two road maintenance microenterprises that are supported through a World Bank-financed project.

The microenterprises program was launched in 2013 under the Second Roads Rehabilitation and Maintenance project with a goal of creating 10 microenterprises to maintain 310 kilometers (192 miles) of roads. The routine maintenance work includes cutting and clearing vegetation on both sides of the road to ensure good visibility, cleaning drainage systems, keeping the roads free of debris and occasionally patching holes in the road. Microenterprise members earn wages from their work, which they invest into their households and communities.

Each microenterprise is supported by a supervisor, usually a civil engineer, who teaches members how to do the road maintenance work efficiently and effectively. Additionally, members learn how to meet conservation standards, as well as gain understanding of why maintenance activities are so important to extend the life of the road. The supervisor performs a progressive evaluation and on-the-job training for all micro-entrepreneurs. Upon completion of the training, the microenterprise is granted a contract to carry out labor-intensive routine maintenance activities over a stretch of road (at a ratio of about three kilometers per partner) for a period of 12 months, which is renewable subject to satisfactory performance.

Ultimately, the program empowers entrepreneurs to become permanent contributors to the conservation of their roads.

Yessenia’s story
During the meeting, we had the opportunity to meet several people willing to share their personal stories with us, including 34-year-old Yessenia Figueroa. Yessenia completed high school with a certificate as a public accountant But, after graduating, was not able to find a job and devoted herself to being a homemaker. She looked after her daughter, Alma Marisol, and helped her parents and siblings take care of the family. Alma attends the 5th grade at the basic education center located near the village. 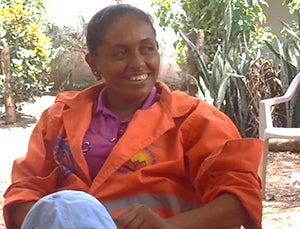 Yessenia's life changed on April 14, 2014 when she — along with nine other members of her community, became small entrepreneurs under the program “Caminos para una Vida Mejor” (Roads to a Better Life). Together, they created the microenterprise "Destinados al Exito” (Meant for Success).

Yessenia told us that the first days of work were very hard, because the road had not received maintenance in a long time, and sometimes they found vegetation two meters high. They also came upon drains that had not been cleaned and were clogged with dirt and other debris. Micro-entrepreneurs must perform the hardest work during the initial months in order to reach the maintenance standards for which their performance is measured. Once this standard is met, tasks become somewhat simpler and more routine, except in the occurrence of unforeseen natural events.

“Being an entrepreneur who works on road maintenance means that one must get up at 4 a.m., leave home at 5:30 a.m. and work under the sun or rain from 7 a.m. to 3 p.m., five to six days a week,” Yessenia explained. But she also told us that the microenterprise program has helped her and her fellow members to be more productive, feel valuable, generate income and help their families and communities. Yessenia can now ensure her daughter’s education, help her mother buy the medications she needs to control her diabetes, and even help her sister with a modest allowance.

Yessenia and her fellow micro-entrepreneurs have also received training in business administration, environmental conservation and health-related topics such as HIV and STD prevention, which will help her in different aspects of her life. In essence, the microenterprise program helps usher people from the poorest segments of the population toward self-employment, while fulfilling the role of road maintenance in the most effective and profitable way, and transforming communities of people into agents that promote their own development. Many of the microenterprises have begun to diversify their sources of revenue, reinvesting some of their earnings from the conservation work. For example, Yessenia’s microenterprise opened a small convenience store with basic household supplies that, in less than a year, has allowed them to triple the amount they invested. They have also acquired a used vehicle to haul their tools and the materials they remove from the roads, and several of them have been able to buy motorcycles from their share of profits.

Community investment (and re-investment)
As expected, the first thing that someone thinks when hearing about this type of program is how people who have never worked on roads can provide proper road maintenance. Some people may believe the optimal option is to hire a well-consolidated company with lots of years of experience. However, the reality is that if adequately selected, created and monitored, a microenterprise can deliver the same quality results as an experienced construction company. The key differences between a community-based microenterprise and a company are in how profits are distributed and who is more invested in performing the work the best possible way.

Associative micro-enterprises are created under a clear and well defined set of criteria that have been tested and validated, and are aimed at ensuring that micro-entrepreneurs have a sense of ownership over their domain and will remain together over time:

More roads to come
Since its initial stages, the program has demonstrated its potential to change people’s lives, while increasing the longevity of investments on road infrastructure through basic maintenance tasks in a cost-efficient way. On average, it costs US$2,700 per kilometer per year to maintain a road through a micro-enterprise — well within the benchmarks for routine maintenance.

Today, as a result of the initial support from the World Bank and the ownership and commitment from the Government of Honduras — in particular the Minister and Vice-Minister of INSEP — the program Caminos para una Vida Mejor has managed to create 32 microenterprises covering some 1,178 kilometers, equivalent to about eight percent of the country’s network. The Inter-American Development Bank (IADB) has joined the efforts and is financing 16 of these microenterprises. The Honduran government's goal is to reach a total of 100 microenterprises in the next two years, covering about one-third of the national network.

The World Bank and the Honduran Government are about to close the project, which enabled the re-launching of this important initiative.  However, the Government is ready to continue financing the program and has allocated the necessary budget to ensure its continuation.

More than 10 years ago, Honduras had a very successful microenterprise program along the paved road network, promoted by our late colleague Guillermo Ruan, who brought the idea to the attention of the Honduran Government. After all this time, Guillermo is still warmly remembered by the early entrepreneurs who participated in the original program. His memory remains in their hearts and minds as this program has transformed their lives. We are all grateful for having been able to see the fruits of his initial work and carry out his vision in Honduras.