Follow the moving carbon: A strategy to mitigate emissions from transport 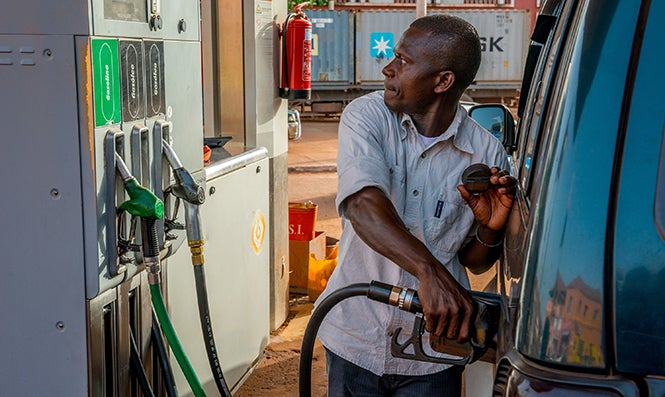 To learn more about the future of sustainable mobility, don't miss Transforming Transportation 2017 on January 12-13. Click here to watch the event live and submit your questions to our experts.


Transport currently accounts for 23% of energy-related carbon emissions--equivalent to 7.3 gigatons of CO2 globally in 2013—and, unfortunately, ranks among the fastest growing sources of such emissions.

If we’re serious about bucking the trend and reducing the environmental footprint of the sector, we first need to understand where transport emissions come from, and how they will evolve. If you take out the 1 GT of CO2 emissions released by the aviation and maritime industry for international transport, about 6 GT of transport emissions are classified as “domestically generated.” Today, the share of domestically generated emissions is split pretty much evenly between developed and developing countries: high-income OECD countries account for about 3 GT, while non-OECD countries are responsible for another 3 GT.

However, under a business-as-usual scenario, this breakdown is expected to change dramatically. Without bold action to make transport greener, emissions from emerging markets are poised to grow threefold by 2050, and would then make some 75% of the global total. Domestically generated emissions from OECD countries, in comparison, should rise by a more modest 17%.

The share of each mode in overall transport emissions also differs depending on which part of the world you’re looking at: while 2/3 of emissions in OECD countries are from cars, freight and particularly trucking is currently more important in the context of emerging markets.  Trucks actually generate over 40% of transport emissions in China, India Latin America and Africa.
In an effort to streamline emissions reduction strategies, transport and environmental analysts have developed a three-tier policy framework known as “Avoid-Shift-Improve”: While achieving the ambitious targets set at COP21 in Paris will require us to tackle transport emissions from all angles, our analysis suggests that we need to pay special attention to urban transport and freight – two very different sectors that need that each call for a specific interpretation of the “Avoid-Shift-Improve” framework.

Within the urban space, focusing on the “Avoid” and “Shift” components has the potential to be more effective in mitigating carbon emissions, while generating significant co-benefits such as more livable, efficient and productive cities. To minimize emissions from cities, transport investments and metropolitan land-use management should favor relatively compact spatial development around mass transit corridors – not an easy transition, but one that is very much in the interests of cities.  Auto-centric mobility seen in American or some Western European cities would completely choke the already congested cities of India, China, and Africa.  Moreover, global evidence – most recently from African cities – suggests that increased mass transit accessibility leads to improved urban productivity, better employment, and higher wages.

The choice between these two urban development paths can have dramatic consequences on carbon emissions.  Consider Atlanta and Barcelona, two high-income OECD cities with similar populations. Barcelona spreads over an area about 3.8% of the size of Atlanta, and offers much more competitive alternatives to driving than Atlanta does.  The result? Barcelona residents emit about 0.7 tons of CO2/capita from their transport usage, or only about 1/10th of the 7 tons of CO2/capita seen in Atlanta.  Moving freight with fuller, more efficient trucks

Within the freight sector, a strategy focused only on “Avoid” and “Shift” has its limits.  While rail is significantly more carbon-efficient than trucks, forecasts clearly indicate that, in a wealthier, more urban world, the growth of the trucking sector will dwarf any potential growth in rail. In India, for instance, even if rail volumes more than double (not an easy task!), the share of rail in freight transport would dwindle to 17% by 2050—less than half of what it is today. Even in the US, the country with the highest share of freight being carried by rail, the trucking sector still accounts for 45% of freight volumes.  In the European Union, the corresponding share is 75%. To us, this suggests that focusing on improving the fuel efficiency of the trucking sector becomes critical. In practice, this would translate into interventions that lead to fuller and more fuel-efficient vehicles.  Data suggest that empty backhauls account for over 40% of truck miles in India and about 36% in China – significantly higher than the estimates of 13-26% for the US and EU. Getting carriers to invest in optimal truck fleets across the world so that they perform as efficiently as those in the US and EU markets could more than half freight sector emissions.  And since fuel represents at least 40% of carriers’ direct operating costs, increased fuel efficiency in the trucking industry would also lead to a leaner, more cost-efficient and competitive logistics sector.

The proposed combination of compact transit-oriented cities and fuel-efficient trucking could limit some, ideally most of the growth of transport emissions across emerging economies--a reduction of 2 to 6 GT of CO2 annually.  This will not be enough to meet the 2-degree ambition of the Paris agreement, but it suggests that, even before turning to technological innovation and more difficult (but necessary) trade-offs, we have in front of us a number of low-hanging fruits that could generate significant emission savings as well as enormous developmental co-benefits.
Topics
Climate Change
Energy
Environment
Transport
Urban Development
Countries
China
India
United States