Hop on the car and zip down to La Paz 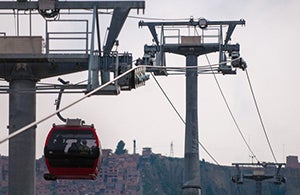 During a visit to my hometown of La Paz in December I was able to witness the construction of the first cement pillars that will sustain “Mi teleférico”, the new cable car system connecting the cities of El Alto and La Paz.

At first my eyes could not believe it. Was this for real?  A cable car system designed to connect two cities? I was well aware of cable cars at ski resorts, and other major touristic attractions like the Sugarloaf in Rio de Janeiro. But cable cars as a commuting mode between two cities seemed to me a different story.

If you have been to La Paz, the highest capital in the world at some 3,650 meters above sea level (13,000 feet), you know it lies in a canyon right below El Alto, another city built on the altiplano, a higher plateau. The population of both cities is around 2 million people connected by a single highway.

With narrow and winding streets, particularly in La Paz, traffic congestion can be awful for thousands of daily peak-time commuters.  Because of the challenging geography, other transport infrastructure –such as additional highways or metro systems- were at some point considered, but were either unrealistic to execute because of the capricious topography, or simply too expensive or not commercially viable.

In this context, it probably made sense to try something different like cable cars.

Five months  after my last visit, the project is now in full swing along with a process of “socialization” and awareness-raising about this new urban transport mode (at least new for La Paz and El Alto residents). The first line -the red one- will be officially inaugurated sometime in May with 109 cabins or pods that could move up to 8,000 passengers per hour.

The additional two lines, the yellow and green, will open later in the year.  When all three lines are in full swing they will transport up to 18,000 passengers an hour over nearly 11 kilometers. This will make it the longest and highest urban cable-car system in the world.

Some of the positive attributes of these cable cars include: some 30 minutes of faster commute between El Alto and certain points of La Paz; cleaner transport than the dirty-diesel spewing mini-buses that roam between the two cities; and an overall more peaceful and civilized commute up in the clouds rather than down below amongst the claxon-ridden, crowded buses, and congested arteries and streets.

The excitement is already in the air, literally.  Try-outs of the new system are in full mode: President Evo Morales was the first official passenger a few weeks ago; then other groups of people followed, including kids who were offered free rides on Children’s Day in April.  Even newlywed couples have already ridden on the “red pods” as a way of marking their change of status and securing good luck. (Traditionally, newlywed couples would cross one of the cities’ bridges to ensure a prosperous marriage)

“It’s the best thing I have seen in my life, it is extraordinary,” said Alejandro Rivera in an interview with the media a few days ago. Alejandro was one of 24,000 kids who were recently given the chance to ride on the “red pods” for free.  The cabins silently glide out of La Paz, ascending almost 500m up to the cliff-edge metropolis of El Alto –at an elevation of 4,150 meters.

At that altitude, overlooking the city of La Paz against the background of the Andes snow-capped cordillera mountains, the views must be spectacular. And authorities think this will also be a plus for attracting more tourism into the city.

The Teleférico La Paz-El Alto is funded by the central government at a cost of $234 million, and built by the Doppelmayr Garaventa Group, an Austrian company, which is no stranger to high mountainous and glacial areas with steep slopes.

The cost of each trip still has not been publicly announced, but the system will open to the public sometime in May.  The cable car will be identified by the letter “T”, surrounded by a circle of colors representing Bolivia’s cultural and racial diversity as well as the projection of future transport lines. The iconography of Tiwanaku, an ancient civilization preceding the Incas, is also part of the logo’s design and look, with two white brushes representing the god sun or “Inti”.

Experts from Austria, Switzerland and Spain are making sure the Teleférico’s electro-mechanic system complies with the highest standards of quality and safety. Work still is underway to connect the cable car’s 11 stations to other transport modes that will take passengers to further destinations by ground transportation like buses and mini-buses.

“Mi Teleférico” (My Cable Car) runs on electricity, and there are expectations that air pollution will decrease as the number of mini-bus trips between the two cities should also go down, although by how much is not yet clear.  In any case, cable cars for urban transport seem to be a market with great potential in heavily populated areas, and with a small physical footprint compared to other huge road projects that will require demolishing houses and buildings, and potentially displacing thousands of people.

It is not yet clear, however, whether the cable cars will succeed as a safer, cleaner, and affordable mode of mass transit for the benefit of some 200,000 daily commuters between El Alto and La Paz.  I certainly hope so.

Nevertheless, it seems that cable cars are becoming a hot ticket item in transport circles.  Besides La Paz, other cities like London, Portland, Medellín, Caracas, and Rio de Janeiro also have their own projects, in some cases linking low-income neighborhoods with city centers. And others like Toulouse and Brest in France are also planning their urban cable pods.

As Henri Grabar wrote in The Atlantic Cities, “Laugh all you want (or cower in fear), but cable-drawn aerial transportation just might be the next big thing. (…) Cheaper than terrestrial fixed guideway transit and quicker to build, the gondola is finally taking its rightful place in the urban landscape.”

I am sure Paceños and Alteños will agree on that.
Topics
Transport
Urban Development
Countries
Bolivia
Regions
Latin America & Caribbean