For fun, suppose you were a software developer, and you came up with a terrific idea to communicate public transit information. For example, imagine your city experiences frequent floods, and you have devised an automated system that sends SMS texts to passengers, advising them of alternative transit routes during emergencies.

How much revenue do you think you could earn for that software? How many people could you positively impact?

What if I told you that today, by taking advantage of one tiny revolution in open data, you could take those numbers and multiply them by 350, turning $100,000 into $35 million, or 1 million people into 350 million? Sounds pretty good, right? If you are in international development, sounds like a promotion…

The GTFS
The revolution comes in the form of a standardized data protocol – the General Transit Feed Specification (GTFS), which is a free and open template for entering data related to basic transit system services, such as routes, stops, fares, and schedules.

Here's what’s in it: 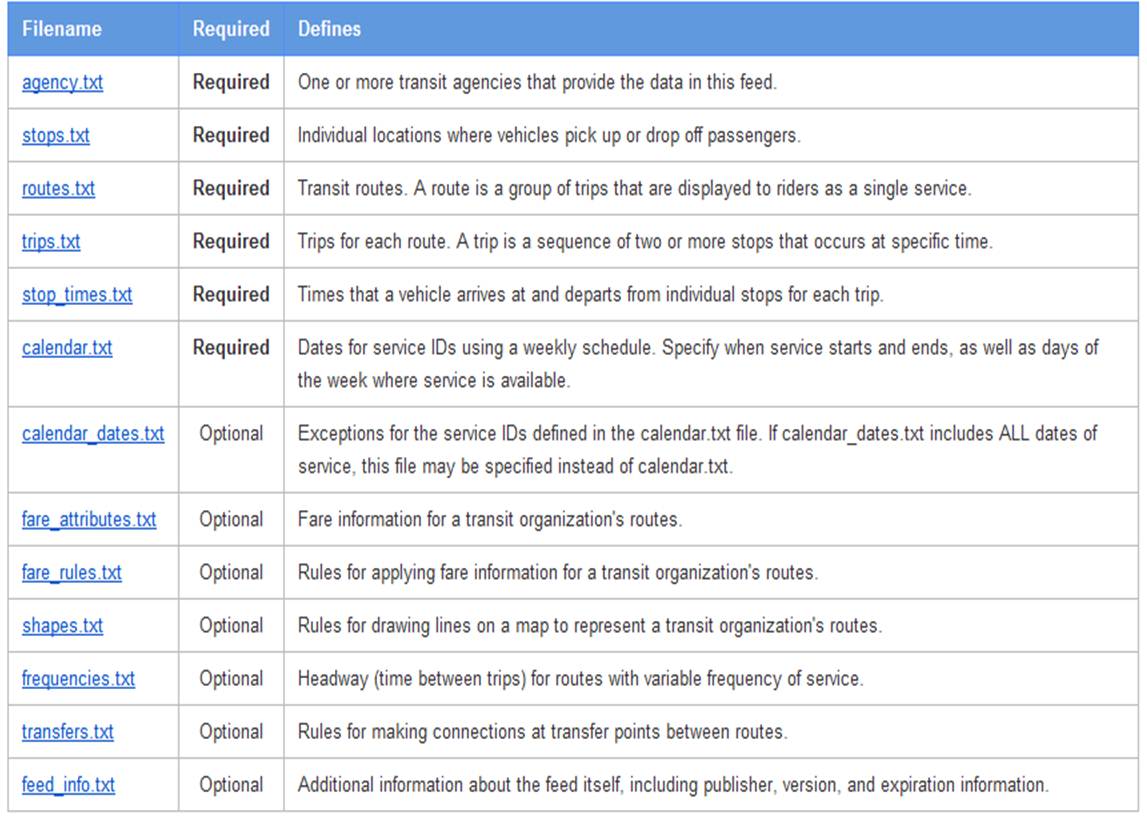 Okay – this does not look very exciting. But that is the point – the GTFS is very simple! Anyone can look at the code and intuit what it is supposed to represent in real life. Even though the GTFS is not a formal standard created by ISO or other standard-setting body, today, already more than 350 transit agencies across the developed world have both placed their data in the format and made it publicly available to developers :

The World Bank, with support from AusAid, is working with the Philippines Department of Transport and Communications and other transport-related agencies in Manila to set up a GTFS database that contains basic service information for the myriad of public transport modes in the city.

Since the GTFS is an open-standard, any software application designed to use transit data from a GTFS database (e.g., a trip planner, map-maker, travel-alert system, data analyzer) can be used with any other city's GTFS database, thereby creating tremendous economies of scale. The Philippines can leverage free and open-source software that are based on the GTFS format, and Filipino entrepreneurs and activists who design new applications will find a global audience for their products.

With the data stored in the GTFS format, a developer could economically build an SMS alternative route alert system, or a program that prints route maps and identifies interchanges, or tools to estimate trip cost and travel time across multiple modes. Also, tools can be created that that feed transit data into other databases and programs, thereby facilitating crowd-sourcing of transport system reporting, inclusion of transport information in disaster risk management programs, automating the evaluation of transit accessibility for different neighborhoods or stations…. all things may be taken for granted in some countries, but would be revolutionary in others. The more cities that adopt GTFS databases, the more applications we will see developed.

Through this single, seemingly insignificant activity, the Philippines may experience a number of very significant firsts:

Before: Passengers get transit directions through word of mouth.
After: Passengers can consult multi-modal route maps, which are regularly updated.

Before: Fare changes are communicated primarily through newspapers. Requests for fare schedules are made directly to government agencies.
After: All up-to-date fare schedules available in one place, accessible on-line, and, potentially, through and SMS query.

Before: No single government agency has a comprehensive digital picture of citywide transit service and routes.
After: Agencies will have access to simple, web-based tools for viewing and updating transit information across all modes.

Before: During floods, government has no means to identify or communicate alternative transit routes to affected citizens.
After: With a GTFS database, this and many other public services become possible.

And…
Further, as more agencies adopt GTFS databases, the tedious task of manually collecting comparative statistics from international transport agencies, with different languages and different formats, becomes the simple(r) task of a computer algorithm, efficiently and quickly culling comparable service data across cities and nations. While there remain some hurdles to overcome, this new level of international data availability is unprecedented -- imagine what we can learn!

One of the key contributions of our Philippines initiative is setting up a web-based user-interface that makes the updating and monitoring of GTFS databases (and route maps) easier and therefore more accessible to transport agencies in developing countries, where programming and GIS capacity may be low.

Here are a few examples of how GTFS has been used by companies, cities, non-profit organizations, and individual programmers:

Looking Forward
It is our hope that, once the project is complete, other cities can use the free software to create and maintain their own databases, thereby creating more global opportunities for improving the way transit information is shared and used. The path is not without obstacles, and as our project progresses, the challenges will be chronicled on this blog.

The World Bank team would like to thank the DOTC, ITP, University of the Philippines National Center for Transportation Studies, OpenPlans,TranzMate, and all of our partner agencies for their exemplary efforts in bringing this program to fruition.