Also available in: Français Bridges are critical links in the transport network. In their position across waterways, they are exposed to the full effects of flooding and landslides, and are often the first pieces of infrastructure to be damaged in the event of a disaster. They also typically take weeks or months to repair.  Besides causing expensive damage to the infrastructure itself, disruptions in connectivity also have a much broader impact on economic productivity and people’s ability to access essential services. As many places are expected to witness more intense and frequent rainfall as a result of climate change, the risk to bridges will only worsen: more rainfall will lead to bigger river flows and more damage to bridges, especially those designed to handle smaller storms.

At each end of a bridges is a structure which supports the weight of the deck. These are known as abutments, and they are often the first part of the bridge to fail. Blockage of the main channel by debris can cause water to look for the path of least resistance around the sides of the bridges, thus placing the abutments at risk.

Traditional bridge construction requires the installation of piles for the foundations of abutments—a lengthy and expensive process that involves specialist materials, skills and equipment.

But there is another promising solution: Geosynthetic Reinforced Soil (GRS) abutments. These allow for rapid and resilient construction of bridge abutments using locally available materials, without specialized equipment. With GRS, bridges can be constructed in as little as five days (Von Handorf, 2013) and at a cost 30-50% lower than traditional approaches (Tonkin and Taylor, 2016) .

GRS abutments are based on ‘geogrids,’ a high density mesh made out of polyethylene (plastic). Layers of soil and geogrid are combined to create a solid foundation for the bridge deck. Construction can be completed with basic earthmoving and compaction equipment, and a range of local fill materials can be used with guidance from geotechnical specialists.

This video is an excellent demonstration of how geogrids can significantly enhance the strength of a soil. When laid between layers of carefully compacted soil, this reinforcing system improves the properties of the soil to the point where it can withstand the load of a bridge deck. 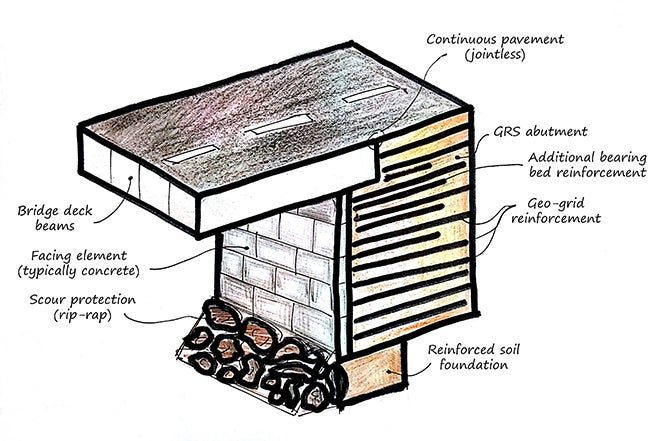 With this approach, abutments can be constructed quickly, at a significantly lower cost and with no pavement joint to maintain. An added bonus is that this approach has a higher level of seismic resilience should the ground shake in an earthquake.  Like with any abutment, protection from erosion by water (known as scour) is of critical importance, but with well-designed scour protection (such as rock boulder armor known as  rip-rap) a GRS abutment will be just as resistant to this type failure as a piled bridge.

Recently, transport and disaster risk management experts from the World Bank looked at introducing GRS bridge technology to Sri Lanka, a country where over 50% of bridges are already suffering from significant deterioration. We found that the local crushed aggregate was ideal for GRS abutment fill, being low risk, low cost and readily available. The team completed concept designs for a sample of four bridges, and concluded that the GRS approach could result in savings of 30 to 50%, not to mention a shorter construction time and added resilience (Tonkin and Taylor, 2016). An application for funding to pilot the construction has been made.

While the promise of this technology has been clearly demonstrated in Sri Lanka, many other locations could put GRS to good use and enjoy similar benefits, and I can only encourage  governments, donors, and engineers to give the GRS abutment option serious consideration when looking to build or replace a bridge.

Given bridges are critical links in the land transport network, GRS can bring a resilient and efficient solution to protecting and restoring connectivity. GRS abutments are an encouraging example of a low-cost, high-impact technology that shows how engineering innovation, paired with outside the box thinking, can go a long way towards protecting infrastructure and economies against the devastating effects of a changing climate.


The World Bank's recent study on the use of GRS bridge abutments in Sri Lanka has been developed with support from the Global Facility for Disaster Reduction and Recovery (GFDRR).