Road crashes have more impact on poverty than you probably thought

Road crashes are becoming a global health crisis and, as such, require comprehensive measures to prevent them, including a better understanding of the social impacts of road-related deaths and injuries.

Several indicators aim to illustrate the impact of traffic crashes. The most common ones are the number of fatalities and injuries.  Globally some 1.3 million people die on the road every year and up to 50 million suffer injuries. And overall economic costs of road crashes range from 2-5 percent of GDP in many countries. These economic costs provide a basis for transport safety improvement projects such as hazard location treatments, road audits, school zones and other preventive measures.

If a member of a family is involved in a road crash, what kind of changes are likely to occur in that particular family? If the head of household or breadwinner is killed or severely injured, the impact to that household can be devastating. There are scarcely plausible surveys that show the effects of road crashes on households because it is presumably difficult to trace victims of road crashes.

In this context, it is worth highlighting the results of a survey on the situation in South Korea conducted by the Korea Transport Institute (KOTI) in 2013. The results clearly show the impact of road crashes on household income, unemployment, home ownership, divorce rate, and income gaps for surviving victims of road-crashes. Here are some of the highlights: 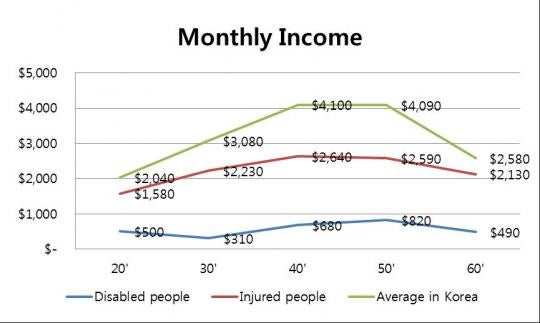 So how do victims respond to the economic losses after a road crash?

Survey results show that almost half (49.5 percent) of the disabled changed from an owned home into a rental home. Housing ownership of the disabled, for example, decreased to 30.9 percent from 36.9 percent in 2013, while the proportion of permanently rented houses has increased to 30.9 percent from 6.9 percent, largely as a result of road crashes. In South Korea, permanently rented houses are provided for the socially disadvantaged class.

Traffic crashes can also break up a family. Almost 37 percent of the disabled have experienced divorces (or separations) after a traffic crash. This is compared to a five percent divorce rate for non-victims of road crashes.  Some of the reasons that couples cite for breaking up include economic difficulties and frustrations resulted from road crashes.

As we can see, traffic crashes can bring about a lot of difficulties on individual households, both in developed and developing countries.

The seriousness of those difficulties will vary considerably because laws, policies and safety nets are country-specific. It is also important to keep in mind that social systems (insurance, medical treatment, etc.) in South Korea are abreast of even some other advanced countries.  So this means that these consequences will be much severe for victims of road crashes in developing countries.

This is why it is relevant and desirable to better understand the social impacts of road crashes in developing countries. And it is equally important to ensure an improvement in road safety around the world as a way of mitigating its negative effects on poverty reduction and economic growth.

What other social costs from road crashes are you seeing in the countries you work?
Topics
Transport
Countries
Korea, Republic of
Regions
East Asia and Pacific The social costs of vehicle accidents are having a great impact on our lives when it could be avoided. It sounds like there should be better, in-depth adult drivers education courses offered in the US. Better driving education would lead to fewer accidents, saving people's lives and jobs in the process.