Use, transparency and reuse – how the transport sector in Mexico is being transformed by open data 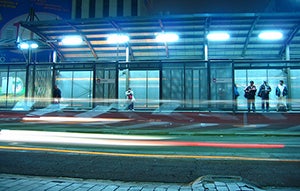 On a recent trip to Mexico City, I had the pleasure of participating in three events that really brought home the transformative power of the open data and open source eco-system that is becoming an ever more important element of our work in transport.

First I joined the Secretary of Mobility for Mexico City to inaugurate an open data-based system for alerting public transport users in this city of 8 million of any disruptions to the city’s multimodal transport system consisting of an extensive metro system, a suburban rail line, 5 lines of the Metrobus Bus Rapid Transit system (BRT), an electric trolley system, as well as a substantial publicly operated bus system.  The alert system was built using open-source software on an open standardized data set of schedules supported by the Bank last year (read more about that initiative led by my colleague Catalina Ochoa).  Not only does this service deliver value for Mexico City commuters immediately, but it also allows any other city that has its data organized in a similar standard GTFS (General Transit Feed Specification) format (over a 1,000 cities do) to use the same code developed for Mexico City off GitHub, a web registry.  Moreover, the open standardized formats let developers in Mexico City or elsewhere build apps that use this information. The market for these applications is potentially global, spurring innovation for user-oriented applications in public transport: there are already many hundreds of GTFS based applications.

Together with my colleague Diego Canales (who wrote about transparency and open data in Sao Paulo), I then participated in a workshop supported by ESMAP where we discussed the second phase of this open data effort with a range of Mexico City agencies.  While the original and primary goal of the GTFS  open data standard was to present public transport service data (schedules and routes) in standard ways to allow for user oriented journey planners (Open Trip Planner is a good example), standardized GTFS data sets can also be used to measure accessibility and allow for better urban planning.

For me, accessibility is a critical measure to understand the role mobility can play in cities to create better functioning urban job markets. By improving job accessibility, cities can reduce poverty and facilitate shared prosperity. The  Figure below for example, developed by Kevin Webb and his colleagues who created an accessibility analysis tool using GTFS data, shows ease of access to jobs via public transport in Seattle. Measurements like this one can be easily produced using GTFS, job census and OpenTripPlanner data. 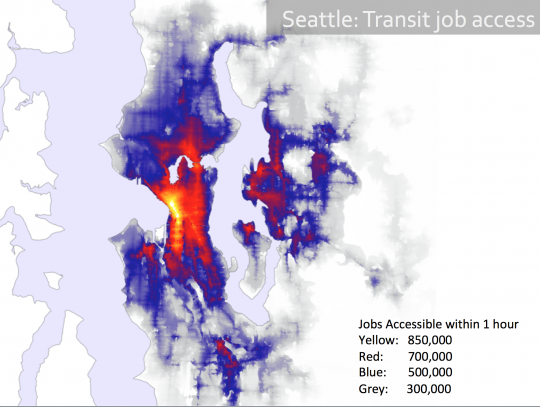 This approach is becoming more common in the United States as a result of a University of Minnesota initiative that uses a GTFS-derived tool to examine the accessibility of US cities. In Mexico, the focus is to build user-friendly open source tools that combine open public transport data with other publicly available data on job, housing and public service locations (ie. open spaces). These tools will help decision-makers assess the evolution of spatial development and urban job markets in their city, and evaluate potential areas of intervention in areas where services lag. Halfway through the workshop I attended, different agencies started discussing the enormous potential for making smarter decisions by  making better use of the data that already exists within city governments -- provided this data is organized, standardized and opened.  At its best, our effort will not only support accessibility tools but spur a shift toward sharing and standardizing data across agencies in the city, which in turn could help expedite inter-agency processes to better respond to citizens’ needs.

Finally, I had the pleasure to hear a presentation of Mexico’s digital strategy which is well worth reading about for many reasons, but particularly for its focus on open data and open source.  The digital office under the President takes the lead in ensuring that all digital efforts of the government result in open data made available in standard format and encourage the use of open source software, which is a big money saver for the government. The vision articulated by Jorge Soto, a special advisor at this office, was to create a future based on open data and open source, not only for transparency, but as a platform for innovation and creating value.

For me these three experiences nicely encapsulate all that makes open data so exciting – a combination of important transparency and open government benefits and sometimes serendipitous reuse that we can bet on to create innovation and value!

I hope to check back in a few months and report on the progress we are making on our open source tools, on the evolution of open data in Mexico and ideally on finding new users and new uses for these data and these tools.