Residents of the pukka houses (formerly temporary shacks) in front of the apartment complex where my family lives in New Delhi have decided to send their kids to private, English-medium schools, cutting corners to save enough to be able to afford it.

The children had (and still have) access to free basic education in government schools, but they and their parents don't care. Notionally enrolled, more often than not the kids were seen playing cricket on the street that divides their houses from our apartment complex. Things began to change as India’s economy took off, and, with that, the perceived premium on quality education. While the public education system remains in the doldrums, market forces seem to be compensating, at least partially.

Ever since moving to South Africa, I have puzzled over the absence of a similar private-sector-led response here.

First, some background. South Africa has fundamentally transformed its education system since the end of apartheid in 1994. Access to basic education has improved dramatically while becoming much more equitable across the races, on the back of significant public expenditures—in the range of 5-6 percent of GDP (close to 20 percent of the budget)—that have also markedly improved their pro-poor targeting.

Quality-related outcomes have remained disappointing, however. Test score results have been miserably poor, retaining an unusually large performance gap by income status. This is clearly brought out in international literacy and numeracy tests where South Africa fares poorly on not only in comparison with other middle-income countries but also a number of low-income African countries. At the same time, returns to education (at least at the tertiary level) have been found to be high. 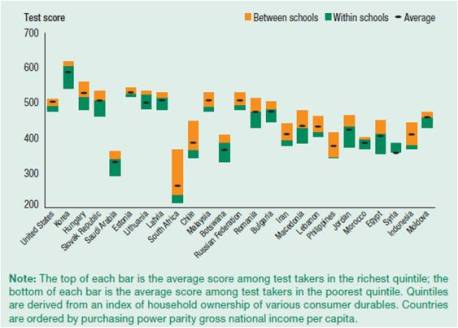 That the shortfalls in the public education system are hindering South Africa’s quest for inclusive growth is almost universally acknowledged. There is far less agreement, however, over what needs to (or realistically can) be done.

Analyses by the World Bank and others have attributed the expenditure-outcomes disconnect to a variety of structural factors, ranging from lack of basic information on school performance to limited parent participation, lack of school autonomy, weak links between performance and teacher pay, insufficiently-trained teachers, strong resistance to change from the teacher unions, highly unequal schools’ infrastructure and physical assets based on income differences, and a host of adverse socio-economic factors affecting the poor communities.

Why then has the private sector not stepped in, as it is increasingly doing in countries such as India and Kenya? In fact, it has. Enrollment in private schools has increased by 76 percent in the past decade, with many schools charging less than R6,000 ($777) per year, according to a recent Financial Times report.

Although still only 5 percent of total enrollment, the rapid growth of low-cost private schools is a welcome sign for a system clearly in distress. Consider the example cited by the FT article of St Francis College, a township-based school, which recently achieved a 100-percent pass rate among students graduating from its high school. Contrast this with the national pass rate of only 68 percent for the matriculation exam, with only 15 percent of the students achieving 40 percent marks or more on average (National Development Plan: 2030 -- National Planning Commission).

Low-cost private schooling may not substitute for free good-quality public education for the poor; affordability would still be an issue even at the relatively low fees levels. But it could demonstrate a partial step, around which more systemic changes could be designed. The poor seem to be betting their limited resources on it. "Some have argued that low price private schools make a significant contribution to increased access to education by the poor but the evidence for this is often partial and incomplete and fails to demonstrate that such schools generate additional school places rather than provide a choice for those who would otherwise go to government school. It is also clear that those households with little or no cash income are unlikely to be able to afford the costs of the fees necessary to support unsubsidized private schooling...However the analysis shows that it is only households in the top two quintiles of income where the probability of attending private schools begins to increase. Private schools do indeed offer a choice for the relatively wealthy but have little or no impact on the access to education of the poor. The development of private schools has resulted in richer households opting out of the government schools removing the possibility of influential community voices being heard who have a stake in government schooling. It appears that these developments are neither pro-poor nor equitable and that it is clear that the state remains the provider of last resort" (Lewin & Little, 2011: 335).

This is a very interesting point and one which is not made in the South African press when the topic is discussed (see these articles from Economist, Economist, World Bank, and FT). While there have been a number of authors calling for the increase in low cost private schools, less emphasis is made about the research behind these claims. After reading Lewin & Little's (2011) editorial I am less optimistic about the role of 'low' cost private schools in South Africa or, for that matter, most other sub-Saharan African countries. Their argument about the 'influential community voices' leaving the public system has many parallels with the fear of 'white-flight' during the transition after apartheid. In order to prevent white students (and teachers) fleeing to the private sector when school fees were abolished/equalized, the SA Schools Act made provision for the charging of school fees to supplement government funds. This prescient policy kept many white students and teachers in the public system, which helped to set a bar for appropriate standards of teaching, learning and assessment. It is widely acknowledged that it would have been detrimental if the majority of South Africa's human capital (teachers) fled to the private sector. We need to think about the unintended consequences of these policies (like low-fee private schools) before jumping on the band-wagon. I'm still undecided about the place of low-fee private schools, but am slightly more skeptical than I was before I read this.

Thank you very much for taking the time to write this, Nic. As we research low-cost private school options and other models to support in South and east Africa, equity has been a great concern of mine. As a US citizen I'm all too familiar with how charter schools have "served" our population, excluding people with special needs and "proving" that government schools don't work--by taking out the most motivated students and spending more government money and private capital on them, then isolating the most disadvantaged, reducing the resources available to them, and comparing the two.
At the same time, the task is daunting and it is difficult to ask an individual family to wait while 10-year school reforms are implemented. That family wants a better education for their children right now, and who can blame them?
It's a very tough choice but I do appreciate your comments on this issue. They are helpful.