7 facts about population in Sub-Saharan Africa 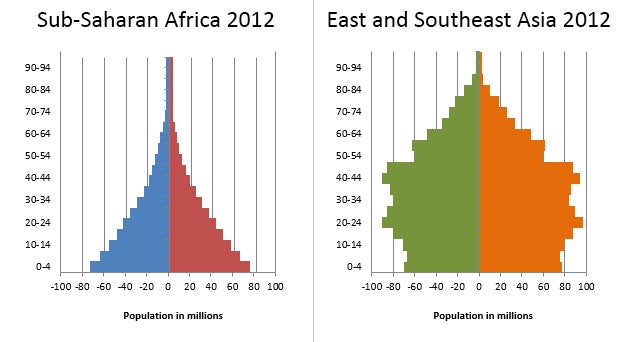 As Africa faces the potential for a demographic dividend, certain facts about Africa’s population offer cause for both excitement and concern.

Africa's Demographic Transition: Planning for the Future of Africa's Youth

For the optimist, these demographic shifts are exciting; for the pessimist, the numbers are daunting. What kind of future will greet another billion people in the region? It depends on the policies that governments embark on to ensure quality education, affordable and quality health care, clean water and adequate sanitation, etc.  A temporary window in time with the potential to rapidly improve the economic wellbeing of a country opens up as workers outnumber dependents (both old people and children). Such a temporary window to improve the economic well- being of a country is known as the demographic dividend.  For some countries in the region, this window has already opened; for others, the opportunity is ripe to open that window. The question is: Will countries in the region take advantage of the opportunity or squander it?

FROM THE SAME COLLECTION Really interesting, thanks for sharing such information.

I need your help on knowing about the macro and micro regional variations in population growth, distribution and density in Africa.

Sadly, the general lack of industry and enterprise in african countries doesn't bode well for its future. Africa and africans produce very little according to their stats. Increasing populations of uneducated and or under educated cast a dismal pall on this often unsettled continent; one which in many ways has become a "welfare continent" to the western world. How does increasing urban populations of needy, poorly educated, tribal minded bode anything but dismay for its future. Where will they work to feed themselves, where will they live, with already insufficient schools, medical care, organized and efficient transportation and roads, proper sanitation, and on and on. Most all plans proposed to change course are abandoned or unsuccessful (giving short bursts of optimism). The time to change is now before Africa as a whole becomes a cesspool of human misery, much of which the world will not want to absorb because the morass was totally avoidable if its countries had dealt with excessive births, corruption, misappropriation of aid etc. At some point the caring world will not care anymore. Bottom line: it's not up to us to eternally prop up the filing prerogatives and cultural deficits of a place which has most all of the raw materials and god given potential to join the 21st century, and start producing products to export to the world. It's time to be self sufficient, it's time to get rid of corrupt leaders once and for all, nd that these imperatives are imposed on it by a caring but, increasingly reluctant world to issue anymore handouts. Africa, ultimately you must fix yourself. Produce! Don't just supply ingredients for other more productive and industrious societies to pilfer and sell back to you. Make them yourself so that you can provide jobs and needed education sanitation and energy to your explosive population. Finally you MUST curtail this population growth with government mandates and enforceable sanctions on births per female. Without this doomsday looms on the horizon. I speak as a black man who cares.