Sub-Saharan African countries bucked the slowdown in the global economy and grew at a robust pace in 2011 (see Africia's Pulse, February 2012 Update).

The region’s output expanded by an estimated 4.9 percent, faster than in 2010 and just shy of the pre-crisis (average of 2003-08) level of 5 percent.  Excluding South Africa, the regional growth rate was 5.9 percent.  Particularly notable is the fact that this growth was widespread:  over a third of countries posted 6 percent or higher growth; another 40 percent grew at between 4-6 percent.  Equally important is the fact that several countries saw sustained growth rates of over 6 percent a year in both 2010 and 2011.

So what can Sub-Saharan Africa expect in 2012?  Barring a serious deterioration in the global economy, the outlook for the region seems bright, with a pickup in GDP growth to 5.3 percent in 2012 and 5.6 percent in 2013.  High commodity prices and strong domestic demand, especially buoyant private consumption, are expected to sustain the expansion.

But these factors also point to Africa’s vulnerability.  Most African countries are dependent on two or three primary commodities for their export revenues (see figure).  Those that export consumer goods, such as Mauritius, Seychelles and Cape Verde, sell 70-90 percent to the European Union. 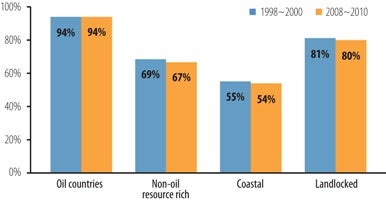 A sharp contraction in Europe, therefore, would pull down global demand, significantly depressing commodity prices and trade and lowering growth rates in Africa. Moreover, with many African countries entering 2012 with less fiscal and monetary policy space than in 2008-09, it will be harder for these countries to respond to global shocks as they did in the wake of the 2008 global financial crisis.  Finally, parts of Africa remain susceptible to food price shocks—the Horn of Africa last year, possibly the Sahelian countries of Mali, Niger, Chad and Mauritania this year.

You can see the full analysis on Africa's economic outlook on the latest update of the World Bank's Africa Pulse here. One wonders a lot after all these years of institutional research and extensive publications over the woes preventing african development, what are those institutions awaiting to do to fix the imbalances...

In many ways such same institutions have to be seen as the cause of such issues challenging the very survival of Africa...

When will these institutions realize that all is needed is going straight to the farmers, allowing them to produce more while providing them with the market information they need to better value their professions?

2011 have proven to bring to light governments rhetoric on development... Civil societies in most countries have helped substantiate such a truth... to the expenses of lives... Now it's clear that non-formal actors are the key players, what more is needed before these bureaucrats start paying attention to those that produce the grains..?

The problem with your argument is that if you think instiutions like the World Bank are so powerful as to control the economies of Africa, then you have to not only blame them for the bad but also the good. And there is no denying that Africa is growing at an impressive pace right now. It is even more impressive to see that growth is being boosted by domestic demand.

I think the credit goes to the Africans, who despite a global economic crisis in 2008, and the risk of another one coming from Europe, are sticking to good policies. And they aren't doing that because some powerful instition is telling them. They are doing it because they are smart.

I agree. Where are the libraries in the rural areas to provide information to farmers, school teachers and students? There is a little bit of a disconnect there.

Do not get me wrong... nothing in my argument led to the slightest pretense of admiration of the west... not at all...

My references would rather draw beyond concepts and today's worlds billionaires... I'm speaking from a realpolitiks' standpoint...

We cannot be complacent of our own people and expect change to happen overnight... and Yes there is need for a "clear separation of the infrastructural development roles of the state and the market development role of the private sector"

That statement I paraphrased it somewhere else saying this:

Two major leads only will save our fragile african countries:

1-Reinforcing intra-regional trade along with supporting local small businesses
2-Diversifying trade partners in a context of Global economy where seemingly we have more choices to opt to deal whoever we want to deal with...

This context of disarray across board gives us the UNIQUE opportunity to chose and initiate our own well-thought endogenous development models...

We as CSO, NGO and CBs are ready to meet the challenges ahead... that's why there is a disconnect between our official leaders and the masses of aware and active citizens they're supposed to manage...

Are our governments ready for the Challenge, left alone, to decide our own fate?

Again Roberts here I stand, and I'm sure you're not far from me provided that you're guided by the right light!

I bet you must be as confident as earlier polls saying at the dawn of the Arab spring that Tunisia was amongst the most stable nation in the Middle East...

Indeed when you mention "I think the credit goes to the Africans, who despite a global economic crisis in 2008, and the risk of another one coming from Europe, are sticking to good policies" I wonder whether we are looking at the same reality...

The crisis in Africa even prior to the whole world financial crisis, was and still is to the point where "there cannot be worse" than what we got... Indeed I would be more than excited to see the "good policies" you are referring to as the ones our african nations are sticking with... One the contrary I would rather say that this whole crisis sill reeling should be a good opportunity to start devising "good endogenous policies" to live by...

African nations have long been subjected to extraversion logics from any standpoint... We need to start from our perspectives... Inside out.

@Demba,
Africa needs optimism. Whereas you may have doom spelt out for Africa, I beg to disagree. I think you need to study economic development history of the advanced economies you so admire.
Warren Buffet once said, 'In the 20th century, the United States endured two world wars and other traumatic and expensive military conflicts; the Depression; a dozen or so recessions and financial panics; oil shocks; a flu epidemic; and the resignation of a disgraced president. Yet the Dow rose from 66 to 11,497'.
This should tell you that bumps along the way do not stop the ride. We may have challenges in Africa, but these dont stop us from taking the road to development. Who said there wouldnt be bumps anyway? We expect them. Everyone does.

For all I care, we have a great continent, we have great people like you and others, we have great resources and we are capable of solving our problems. Again, Buffet said, 'Should you find yourself in a chronically leaking boat, energy devoted to changing vessels is likely to be more productive than energy devoted to patching leaks'. Dont spend time patching the leaks. Call another boat. Do things differently and get Africa out of the doom you are spelling for it. Stop lamenting. This is our century, and we sure are going to use it. Get in.

Given the level of economic shocks that are gripping Africa's major export destinations, it is high time market diversifaction took centre stage. Africa needs to add value to its products and be able to export to various economies so as to spread the risk of single market failures.
The private sector in Africa has so far demonstrated ability to add value, although on a limited scale, to Africa's local products, and sell to the most economically productive markets. This needs to be strengthened to international standards.
The protectionist tendencies in promising markets should be reduced, and Africa's products given more space internationally.
Above all, emphasis should be on clear separation of the infrastructural development roles of the state and the market development role of the private sector. This will ensure that each party plays its role for the facilitation of the other.