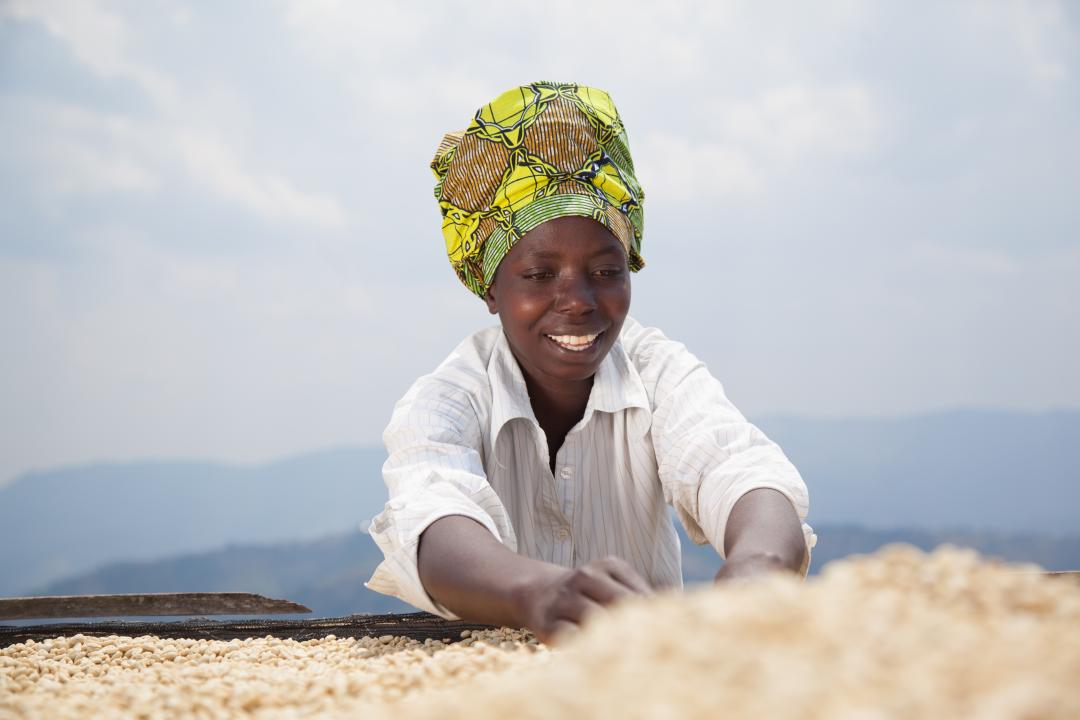 Women are less productive farmers than men in Sub-Saharan Africa. A new evidence-based policy report from the World Bank and the ONE Campaign, Leveling the Field: Improving Opportunities for Women Farmers in Africa, shows just how large these gender gaps are. In Ethiopia, for example, women produce 23% less per hectare than men. While this finding might not be a “big” counter-intuitive idea (or a particularly new one), it’s a costly reality that has big implications for women and their children, households, and national economies.

The policy prescription for Africa’s gender gap has seemed straightforward: help women access the same amounts of productive resources (including farm inputs) as men and they will achieve similar farm yields. Numerous flagship reports and academic papers have made this very argument.

But it turns out that closing the gender gap in agriculture isn’t so straightforward. The new World Bank/ONE Campaign report demonstrates that – contrary to the conventional wisdom – equalizing women’s access to productive resources is not enough to close this gap. The report, which draws on background papers from the World Bank’s Living Standards Measurement Study - Integrated Surveys on Agriculture (LSMS-ISA) initiative and the Gender Innovation Lab, applies a statistical method known as decomposition analysis and finds that, while gender gaps in quantities of resources still matter, gaps in returns to those resources are often more important.

Take the example of farm labor, which emerges from the report as a chief driver of the gap. Women in Niger use less adult male farm labor on their plots – a factor behind the country’s 19% productivity gap. But even when Niger’s female farmers deploy the same amount of labor on their plots as males, men still enjoy an advantage. They garner higher returns (in terms of output per hectare) from the male labor that they use on their fields. This difference could be driven by a host of context-specific factors, including: child care duties that impinge on women’s ability to mobilize and supervise farm labor, norms that lead male laborers to exert more effort on male-managed plots, women’s inability to command labor at key planting and harvesting periods, and/or cash constraints that oblige women to hire less effective farm labor.

If these gaps in returns also matter, then how do we level the field? After identifying the priority drivers of the gap, the report then sifts through rigorous evidence from impact evaluations and other credible research to identify a 10-point policy action plan. While there remains a substantial knowledge gap on what works for some areas, the sector’s evidence base is growing.

And lessons from other sectors can offer some big ideas on how to tackle the gender gap in agriculture. The provision of rural child care services offers one promising example. Sebastian Martinez and co-authors conducted a randomized evaluation of a pre-school program in rural Mozambique and found that, in addition to positive effects on schooling and child development outcomes for beneficiary children, the program led to a big positive externality: primary caregivers increased their labor force participation by 26% relative to a control group. Such an approach should also be piloted and tested to see whether it helps free up women’s time for more productive agricultural work – and helps make Africa’s big gender gap a much smaller one.

This is the first entry in a new blog series highlighting #AfricaBigIdeas. It will feature the results of the most innovative Africa-related research being done across the World Bank. What’s your BIG idea for Africa? Tell us using the following hashtag #AfricaBigIdeas
Topics
Agriculture and Food
Gender
Poverty
Countries
Ethiopia
Mozambique
Niger
Regions
Africa
Africa Michael O'Sullivan,
It does seem to me that, though Sub-Sahara Africa might slowly be getting out of the old 'Peasantry mode of Production' in agriculture; where division of labor between male and female field activities seemed to dump the work-load on the women, the new emerging farming methods that are now mostly getting highly mechanized - in a different way - still create or update that ancient division of labor to another level. That factor though does not mean that the family unit should be promoted to the level of women having their own separate farming activities - so that the data like 23% under performance by Ethiopian women as compared to men output, in the same crop field of farming activity - becomes contradictory!
I am a Ugandan Author and, used to sometimes make comments on Shanta's Blog. I seem to see that, World Bank/ONE Campaign report may in the more modern post peasantry; modernization of agriculture, as is being implemented in Uganda - might encourage the family unit into staging separate farming activities that would eventually negate unitary family farming activities since, the women might also get support and input of their own and thus be able to run their own... see what I mean a man and woman should not compete in such undertaking. But then, women co-operatives working as a group might make sense though, even then ropes will be pulled between the men and the women - since such type of groups might be defined as "Widows" etcetera...
Suggestion: In that light, I might be inclined to suggest that the women, depending on areas might be encouraged into say developing fruit farming and every other such types of intensive farming activities... While the extensive grain mechanized farming remain the man's job.

HAZARDOUS AFRICAN WOMEN & AFRICAN LEADERSHIP - WB/One Campaign Report seem to mix-up WB's understanding of the African women. Support is doubtlessly needed to enable and empower the process of 'poverty Eradication' in Africa, which is the ultimate aim of this Blog discussion and, the major policy of World Bank.
World Bank is however constantly criticized as having economic analysis that seem to constantly hit snags and fail, or achieve little in ultimately achieving their own planned end - I don't have to delve into any detail references. Countries like Uganda have run very effectively their own [Poverty Eradication Program] WB contribution there might only be seen in providing financial support - and less or non-existent Advisory or idea input. The idea of funding Women Farmers as against conventional role of Men in Agriculture seem to encourage undue competition and over-powering of women astray...
RECENTLY, a woman politician of many years in Uganda suddenly resigned her Ministerial role as State Minister for Water... to take-up an ambiguous job at the World Bank. There is to me, a contradiction here obviously encouraged by WB. How on Earth will there be anything poverty eradication? If respected women are encouraged to turn against the status quo - between manhood and womanhood - in farming as in National political Leadership.
What I see here is the planting of chaff; in views and ideals that will only lead Africa down the drain... the obvious trend to build-up among the African Men is DISTRUST and DISGUST that might throw women back to servitude - where the woman will lose her liberty and role in National Leadership in Africa.
The African Men have respected the women and bowed to popular world concerns for development of the woman, so that today the African woman enjoy fair-play, freedom, tolerance, respect and access to freedom of movement and access to wealth.
But this state of affair has exposed the leading and enterprising women to the outside world to an extent this their liberty, is becoming a challenge that bear negative fruit - the abundance and the abandon is more an accumulation of rot... now than anything else ever before. The African Men still hold the key [and the ropes] to the women liberty and freedom. Putting them back down where they belong is not a difficult feat to accomplish - in Uganda I dare say, it is only a matter of time! World Bank has no views and ideas to float - their only role is to financially support African Governmental plans, policy and programs. Granting to African students. The Health sector and leave the women out of their programs. Especially OLD African women who should come back home and leave the younger generation to join the International civil services. TIME, just a matter of time and the Ugandan women might find themselves down - where the African woman belong.

That there will be gender differences is a given. In my opinion, we should look at ways to encourage various target groups to play to their strengths. For example, in case of women farmers, any hard labor intensive work will see them struggle in comparison to men. Better approach to playing a losing proposition is to play a completely different game.
Women farmers are more diligent, caring and persistent. They may show more productivity in activities like silk worm rearing, floriculture, medicinal plants, protected vegetable or mushroom cultivation and so on. I would suggest a 'horses for course' approach so together we form a better whole.

The Africa Progress Panel, chaired by former UN Secretary General kofi Annan, has released its 2014 report "Grain, Fish, Money: Financing Africa's Green and Blue Revolutions". This report sheds light on the gender component of agriculture in Africa and the need to extend finance to women. Of course, women are cut off from access to finance compared with men. But little is being done to reverse this trend. The Africa Progress Report gives compelling recommendations to help realise the full potentials of women in agriculture, who comprise the majority of farmers in Africa. Read report here: http://africaprogresspanel.org/publications/policy-papers/2014-africa-p…

It's a sensitive subject, but... have you evaluated against the FGM status of the female farmers?
FGM is a life-long debilitating condition with vast impacts on health (physical and psychological) and socio-economic well-being. It is another factor, linked in outcomes in some respects to the also very important issue of child care.
Hilary Burrage