African Debt since Debt Relief: How Clean is the Slate?

This blog post was co-authored with Dino Merotto, Tihomir Stucka, and Tau Huang.

The benefits of debt relief have persisted, although some countries may now be borrowing too quickly.

Remember Jubilee 2000 and the HIPC Initiative? Remember the “Drop the Debt” and “One” movements in 2005? Live 8? Bono on the White House Lawn?  Those white “make poverty history” wristbands?

Seven years on, debt is now making headlines in the rich countries.  In Europe and the US the news is of sovereign debt downgrades amid speculation about capacity to rollover debts, and countries’ long-term fiscal capacity to repay.  The global crisis has left many rich countries trying to figure out how to shrink their budgets whilst at the same time getting their economies to grow.  It’s a set of challenges that would have sounded all too familiar to Africans in the 1990s.

You don’t hear much about the debts of African countries any more.  For good reason:  creditors have been dealing with the nitty-gritty of delivering on their promises under the Highly Indebted Poor Countries (HIPC) Initiative and its cousin, born at Gleneagles, the Multilateral Debt Relief Initiative (MDRI).  Together these initiatives wiped out most of the remaining external debts of the HIPC countries to the World Bank, African Development Bank, and IMF. Multilateral creditors, bilateral aid organizations, export credit agencies, and private creditors have all played their part, as debt relief delivered about $100 billion to African economies since 2000 (around two-thirds HIPC, one-third MDRI).

Then what? Did African governments simply go back to the well? The debt sustainability analyses undertaken annually by the Bank and the IMF allow us to answer this question.

The answer is no: overall, African governments have borrowed responsibly since receiving debt relief. Debt stock ratios – which fell dramatically with debt relief - have risen only slightly since. In the 26 African countries that benefitted from HIPC/MDRI, nominal public debt fell from a GDP-weighted average of 104% of GDP before debt relief to 27% after irrevocable debt relief (in most cases around 2006); by 2011 the ratio had risen only to 34%.

And it’s not just about favorable commodity prices.  This pattern holds for natural resource and non-resource endowed economies, showing it’s not just the effect of recent high commodity prices. Where African countries have borrowed, it has mostly been externally: contrary to popular belief, there has not been a noticeable shift towards domestic debt financing. 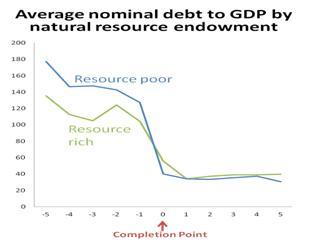 How come governments are being so prudent?  One of the objectives of HIPC was to clear the debt overhang and allow countries the opportunity to borrow again, responsibly.  Low-income countries have unmet financing needs, and many now have plenty of opportunities to borrow from new creditors and from markets.  So why would they not just scale up borrowing again?  First, because concerns about rapid new borrowing led the World Bank and other development banks to give grants in place of loans to poorer, riskier countries. And governments that benefitted from debt relief are discouraged from taking on debt at commercial terms even as markets view their now healthier balance sheets favorably (several African governments now issue sovereign bonds on international markets).  Through annual joint assessments of their debt sustainability, borrowing countries are monitoring debt ratios against projections of future needs and future economic growth.
So is no news good news?  To a large extent, yes, it is.  The forward-looking “debt-distress” risk ratings prepared by the Bank and the IMF have improved markedly in Africa and continue to do so. The number of countries rated as high-risk has halved (from 18 to 9) since 2006, while low-risk ratings are becoming the norm (from 5 to 13).

But there are reasons to remain vigilant. In the eight African countries that have borrowed fastest since debt relief (Ghana, Uganda, Senegal, Niger, Malawi, Benin, Mozambique, and São Tomé and Príncipe), a third of the reduction in debt stock indicators has been eroded over about four years. At this rate, within a decade these countries could be back to pre-relief debt stock ratios.  The sources of this increase in new borrowing are diverse. Optimistic expectations about natural resource dividends are a common thread. New borrowing sources have also opened up. In Senegal, sovereign bonds now make up 15 percent of public external debt. In Mozambique, China accounts for more than a third. In Ghana both these sources feature in the increase in debt stock indicators.

And it’s too soon to declare a return to sustainability, even in the countries where debt ratios have remained steady.  The sustainability of countries’ debts depends on how they use their new borrowing and other financing sources.  Countries that invest well in growth-enhancing assets will generate the export income to repay; those Governments that consume, or invest unproductively, will not. And those that can adjust spending most flexibly to negative shocks will minimize unforeseen debt accumulation.

Africa’s economic history shows us this.  To keep debt levels under control in future, Africa needs to make headlines through investment and growth.  Prudence on borrowing limits needs to be matched by shrewdness in managing natural resources and public investment.  Past mistakes will need to be avoided, and capacity constraints overcome.  It certainly won’t be easy, especially with deleveraging and slow recoveries in many rich countries, but with debt relief now followed by sensible borrowing it seems likelier that Africa can... Nigeria not mentioned, yet government debt ratios increasing dramatically (Finance Minister claims it is manageable], but just as importantly is the private sector debt, of the banks, the airlines, etc.

A Guardian [Lagos] newspaper commentator a few days ago: "It is also noteworthy that Nigeria is gradually sliding into debt-trap it exited few years ago."

Nice to see it acknowledged that it took the world wide pressure of the global jubilee movement for rich countries, the IMF and World Bank to recognise that debts had to be cancelled.

It is encouraging how this hard-fought cancellation, with numerous unjust strings attached, has finally led to much lower debt burdens. But there are countries such as Jamaica, Philippines and El Salvador which continue to pay huge amounts in debt payments each year, on a debt burden which dates back to the 1970s and 1980s.

Moreover, the debt crisis in countries such as Ireland and Spain was caused be the borrowing of the private sector. Yet in most low income countries, there is little or no monitoring of private sector debts. Where figures do exist, private sector foreign debt payments have increased from 4 per cent of export earnings in 2000 to 10 per cent in 2010; double those of the public sector.

We still need:
- debt cancellation for the most indebted countries, wherever they are in the world
- monitoring of all debts and financial flows
- regulations which deal with private sector debts to prevent more finance fuelled crises across the world

There is a great deal of positivity to be taken from the information provided in this article. None more positive than the responsability that is being shown with borrowing since the huge campeings carried out in the last decade.

It would have been easy for many of these hardest pushed nations to go 'back to the well' as it were, and the fact that this hasn't happened is a clear signal that the bigger picture is well and trully in sight.

While I agree to an extent that Jubilee is still required, I see this as beeing more practicable in the current global situation through regulation, further debt cancellation may realistically have to wait.

Thank you for your comment. Nigeria is an interesting case. It wasn't a HIPC so isn't in our averages in the blog, but it did negotiate a large debt write-off with the Paris Club around the same time as HIPC was at its peak. Today Nigeria has many issues but public or external debt are not uppermost among them. According to the IMF's most recent Article IV, external debt was below 3% of GDP and public domestic debt, while high at around 19% of GDP, is not unmanageable. Nigeria's biggest challenge is making sure its oil revenues benefit its whole population, and future generations. I think you are right to highlight other debts that can become vulnerabilities, such as SOEs and private sector debt, although the latter are less amenable to public policy than the former.