Hardly a week goes by without an African investors’ conference or growth summit. Portuguese professionals are looking for opportunities in Angola. Silicon Valley companies are coming to Kenya to learn about its homegrown ICT revolution. This is not an irrational fad. Since the turn of the century, Africa’s growth has been robust (averaging 5-6 percent GDP growth a year), making important contributions to poverty reduction. The current boom is underpinned by sound macro policies and political stability. Unlike in some rich countries, public debt levels in most of Africa are sustainable.

One way to track Africa’s progress is by charting the number of countries that have achieved “Middle Income status”. In the World Bank’s definition, you become a middle-income country (or “MIC”) when you cross the $1,000 GDP per capita threshold. To be sure, even at $1,000 per capita, many of these countries still have high levels of poverty and poor human development indicators.  Gabon, at over $10,000 per capita income, has one of the lowest immunization rates in Africa.  Nevertheless, reaching middle-income status signifies membership in the same group as, say, Indonesia, Mexico and China, which have access to global capital markets.  It also signifies a level of resources that can, in principle, be used to address the country’s development needs.

How many MICs are there among Sub-Saharan Africa’s 48 economies? We have informally asked this question of 200 people (many pundits and professionals among them). The standard answer is “around five”. Only one person got it right and almost everyone is surprised to hear the result: Africa today is home to 22 MICs (23 if South Sudan is included)! Kenya, East Africa’s largest economy, is not among them (or for that matter is any other EAC member). In fact, if you ranked all Sub-Saharan African countries by per capita income, Kenya would be right in the middle, ranked 24th out of 48.

If Sub-Saharan Africa were one country it would already be a MIC with an average per-capita income of around US$ 1,500. This average, however, masks wide differences. Africa has mature economies, such as Botswana, Mauritius and South Africa; it is also home to fragile and conflict-affected countries that are still struggling with entrenched poverty, such as Burundi, the Democratic Republic of Congo or Guinea-Bissau. If current trends continue, most African countries will have reached middle-income status by 2025. Only about 13 countries will remain low-income, most of them fragile states.

Africa’s more advanced economies can be grouped into four, not mutually exclusive, categories, of between six to eight countries:

First are mature MICs which include Botswana, Cape Verde, South Africa, Mauritius, Namibia, Seychelles, and Swaziland, with some 60 million people. These are Africa’s better-off economies, located in Southern Africa or small-island states and come most naturally to mind when thinking about Africa’s Middle-Income countries. But their growth rates are actually lower, especially in South Africa, Africa’s largest economy.

Second are commodity MICs. These are Angola, Congo (Brazzaville), Equatorial Guinea, Gabon, Ghana, Nigeria, Zambia, Sudan. These countries, which are home to about 260 million people, are rich in natural resources, mainly oil. By most social standards these countries remain very poor but they would have sufficient resources to fight poverty successfully.

Forth are Africa’s next MICs. The following countries – home to 110 million people today – should reach Middle-Income Status by 2025 if past trends continue or political interruptions subside:  Chad, Kenya, Mozambique, Rwanda, Sierra Leone, and Zimbabwe. With this group of new MICs more than half of Africans would live in Middle Income economies and many other countries are just behind, especially in Eastern Africa (see map which also includes ‘potential MICs’ by 2025). 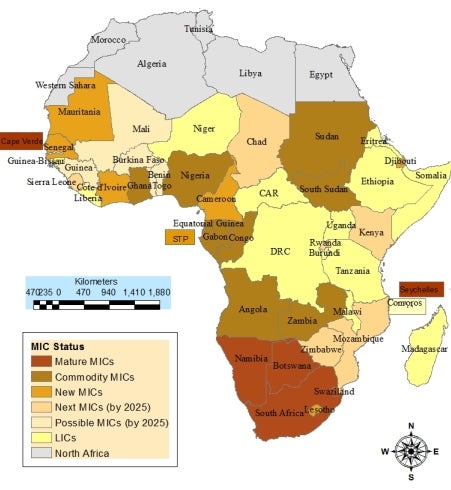 Reaching MIC status is not a goal in itself. Sustaining growth and making it more pro-poor will be a tall order, as the experience of some of the mature MICs shows. In order to grow at current rates, Africa needed to get a few –albeit very important– things right, such as sound macro-management and political stability. This allowed the continent to recover after two unsuccessful decades. To sustain growth, African countries will need to address the challenges of structural transformation, employment, physical and human capital deficits, all of which have their roots in governance. But if Africans and African policymakers could correct the macroeconomic policy failures of the past, they should, aided by a young population and the technological revolution that is sweeping the continent, be able to overcome the remaining government failures to experience sustained growth and poverty reduction in the future.
----------------------
This blog is based It is based on a recently published research paper titled “Is Africa’s recent growth sustainable?” at the Institut Français des Relations Internationales (IFRI),
- Follow Shanta Devarajan on Twitter @shanta_WB
- Follow Wolfgang Fengler on Twitter @wolfgangfengler

Hi
Interesting blog post. Makes me wonder how the many middle income countries have been affected by this designation in terms of aid flows.

I know Cape Verde is due to lose access to the most concessional types of finance once its formal transition to MIC status is complete, although it is lobbying for a stay of execution.

What about other countries? Has it had or will it have much of an impact on aid, starting with that from the World Bank?

Fengler, thanks for your article. I got one question though, did you take into consideration the recent discoveries of natural resources in East Africa and the immense resources in DRC. See how fast Angola has moved after the war ended. And finally why does everybody always write off Somali despite it's location?

Very interesting indeed. I have been to many of these African countries, both remote areas and urban...What ails the continent is inequality. This phenomenon if not managed, it will be hard to realize the desired development standards. Cases in point are Kenya and Nigeria. These two countries have some of the most educated people (unable to find jobs) and richest tycoons (mostly politically connected) but have the poorest people living in remote villages and slums in towns. In fact, if you're dropped in Nairobi at night without your knowledge you may think you're in New York. Go to Lagos, same thing, extremely rich few and poor majority...

DRC is also referred to as "a geological scandal." the country has everything it needs to be an economic power. In addition to diamonds, gold, and copper, DRC has coltan on which most of ICT depends. So why isn't DRC among Africa's MICs? Why is DRC the most underdeveloped country in the world? Why do Congolese people allow themselves to be ruled by rebels and plutocrats? DRC needs patriotic and competent leadership.
Arise, Congolese!
Debout Congolais!
Happy Holiday!

I think you need to look at new discoveries at EAst Africa, gas, oil. Tanzania, Uganda Mozambique before you conclude

Thanks for this interesting blog post! YES,african economies are performing far much better than the previous years.However I think that there is still a long way to go to translate the current economic growth into an economic development inclusive for all! in terms of sustainable job creation for the youth and poverty eradication especially in rural areas. "the seller on the streets, the rural smallholders must feel that change into their daily lives "'

Even though stability and the use of sound macro-economic policies are inevitable to reach the MIC's level... there is a need for African governments to adress issues such as: youth employment, reforms of the education system( by developing the vocational training for e.g) and the most important promoting and supporting the private sector to create more jobs and encourage innovation. Otherwise we will be creating a social gap/fracture between the middle class and the poor population for the up coming years, which might end up in social tensions like what is happening currently in South Africa!

This blog is very interesting. But there are obvious gaps in the investment strategy of the WB if they really base their funding on the GNI or per capita income etc. The problem in Africa is mainly inequality. Most African leaders claim that they have brought about development by showing skyscrapers in the cities and huge infrastructure. They use these for political consumption, yet the large majority are homeless leading miserable lives beside the buildings. I found multi-dimensional poverty index (MPI) as a good tool to sort out these discrepancies.

I was trying to to look for Rwanda, though very small but performs better than its neighbors. This shows how leadership and policies matter a lot!

Dear Fwamba,
thanks for your valuable point. You are right that if natural resources in East Africa and along the coast up to Somalia become commercially viable and are exported on scale then these countries would join the MIC bandwagon even faster. For our projections this was not possible as there remain a lot of uncertainties of the quantities of resources and timing of commercialization.
However, let me reemphasize our two main points (which we develop more deeply in the paper, www.ifri.org/downloads/devajaranetfengler.pdf): First, there are more countries in MIC status than most people thought possible some ten years ago. Second, despite this good news, many development challenges remain as large as ever, especially many oil-rich countries have failed to improve services and reduce poverty.
Best regards
Wolfgang

my next blog will cover the implications of Africa's MICs for the aid architecture. Please note that aid continues to rise and this is a good thing. But there are two important changes in the aid architecture: First, the growth in aid flows in increasingly due to new players which is also increasing fragmentation. Second, even if aid is growing its share of African economies and budgets is shrinking.

Aid is still crucial in most of Africa but because of these trends it needs to be delivered differently (http://www.brookings.edu/research/books/2010/deliveringaiddifferently)

Hello There. I found your blog using msn. This is a very well written article.
I'll be sure to bookmark it and come back to read more of your useful information. Thanks for the post. I will certainly comeback.

It's hard to come by well-informed people for this topic, but you seem like you know what you're talking
about! Thanks