Cassava as an income-earning crop for small farmers

Sub-Saharan Africa produces more than 50 percent of the world’s cassava (aka manioc, Tapioca, and Yucca), but mainly as a subsistence crop.  Consumed by about 500 million Africans every day, it is the second most important source of carbohydrate in Sub-Saharan Africa, after maize. The leaves can also be consumed as a green vegetable, which provides protein and vitamins A and B. As an economy advances, cassava is also used for animal feed and industrial applications.

Described as the “Rambo of food crops” cassava would become even more productive in hotter temperatures and could be the best bet for African farmers threatened by climate change.

Cassava is drought resistant, can be grown on marginal land where other cereals do not do well, and requires little inputs. For these reasons it is grown widely by African small and poor farmers as a subsistence crop. However, cassava’s potential as an income-earning crop has not been widely tapped.

Cassava presents enormous opportunities for trade between areas with food surplus and food deficit. Currently, a large shortfall of the regional food supply is filled by cereals bought in the international market. For cassava to become an income-earning crop at intra-regional market for small farmers in Africa, two main obstacles remain: post-harvest processing and regional trade barriers. 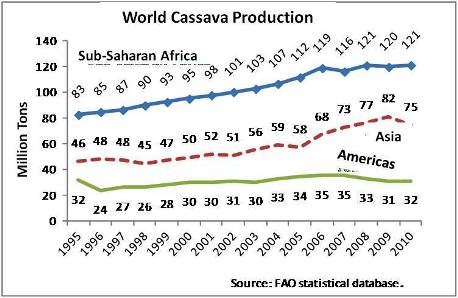 Because transporting raw cassava over long distances is uneconomical and logistically difficult due to its high water content, fresh cassava must be processed into products suitable for transportation in order to be sold in markets. Cassava chips are transportable as a semi-processed product for animal feed, which involves simple procedures and can be accomplished at farm gate by small farmers with the current technology. However, processing cassava for human consumption requires more complicated procedures, as well as water, which could be scarce in certain rural areas. Low yield can also hamper small farmers’ profitability, but a few African countries have already achieved yields comparable to that of Thailand’s, the world leading cassava exporter.

Commercialization of cassava is already happening at the community level. However, cassava is yet traded at intra-regional level. Currently, the limited post-harvest processing capacity at industrial level and the high-cost added by NTBs (in some areas low yields are also an issue) make the cost of cassava flour considerably higher than that of imported cereals. In the short- to medium-run, however, cassava intra-regional trade for human consumption and animal feed should be a viable option if the impediments are addressed.  Additionally, women can benefit significantly from this process because they play a dominant role in food production and trade in Africa.

What do you think should be done to accelerate cassava trade in Africa, if you agree with me that cassava has a great potential to alleviate regional food shortages and poverty? 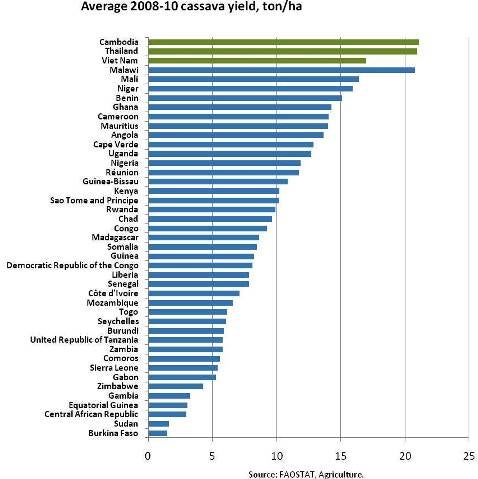 Pleas have a look at the following website:
http://www.dadtco.nl/
The Dutch Agricultural Development and Trading Company (DADTCO) developed an innovative “split” processing technology (in the field and at the factory) that has changed dramatically the way cassava is perceived, grown and processed in Africa. The company’s Autonomous Mobile Processing Units (AMPUs) processes fresh cassava on-farm or nearby, instead of attempting to transport the crop over long distances to a central factory. Each AMPU processes harvested cassava into cassava cake, which can be used in that form by the brewing industry or can be transported to a factory for further processing into high-quality cassava flour (HQCF), starch and glucose.
DADTCO has partnered with SABMiller one of the world's largest brewers to produce the first ever commercial-scale cassava-based beer. The beer, ‘Impala” is brewed in Mozambique by SABMiller's local subsidiary, Cervejas de Moçambique (CDM). By creating a sustainable, vibrant market for the cassava, this project has a significant impact on the lives of the farmers and the local economy. The project is very successful and will soon be rolled out.

I want to know is it only cassava cakes this AMPU can process? How about chips and pellet? I want to go into cassava production and processes but I need to overcome some of the challenges faced by my predecessors!

Hi, seems like a lot of problems and hard solutions.

cassava processing should be along the food security issues.. here in the philippines , mostly it is utilized for animal feeds. It suffers similar predicament as what you have indicated .. post harvest processing. Farmers could not deliver good quality cassava chips.