The Triple Threat, as it is referred to in South African policy circles, remains a key policy priority for the government; namely, inequality, poverty and unemployment. The latter – unemployment – was 27.2% in the second quarter of 2018 and at such high rates, it is a critical development issue in contemporary South Africa.

Access to the South African labor market by international migrants, asylum-seekers and refugees is a contentious issue in the presence of high levels of internal migration, where local migrants are also seeking better livelihoods. Notably, social cohesion in South Africa, as is the case in other countries, is influenced by the widespread belief that migrants have a negative impact on the economy. The implications of migration on local jobs, is therefore, highly contested. However, robust economic analysis may provide the necessary impetus for policy-makers to develop interventions that create positive jobs outcomes for migrants and locals alike.

South Africa has long been a major immigration hub in the region hosting migrants, refugees and asylum-seekers from vari­ous African countries as well as people from outside of the con­tinent (see figure below). After 1990, international immigration in South Africa increased rapidly and underwent a major transforma­tion, shifting from collective mining labor agreements to largely informal and individual immigration. In the 1990s, South Africa hosted refugees, although fewer than many other African countries. There were two major inflows of immigrants to South Africa: the Mozambican refugees from 1984 and Zimbabweans in 2000s. Mozambican refugees were officially granted that status after an agreement between the UN Refugee Agency (UNHCR) and the South African government from 1993. Notwithstanding this protection, many Mozambicans were deported from the country as ‘illegal immigrants’ and only a few were able to stay and legalize their status. Despite, the emergence of South Africa as a major immigration hub, immigrants’ share in the population has not significantly increased over 1996-2011, rising from 3.3% to nearly 4.0% over the period. 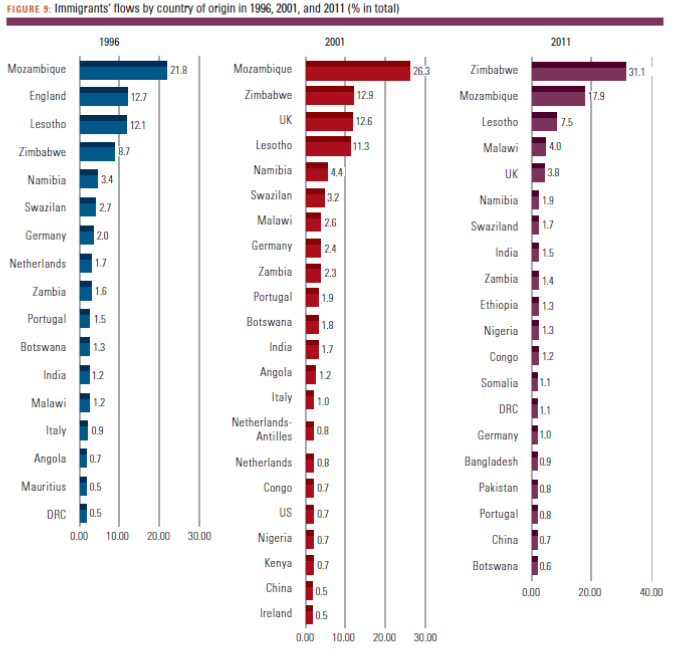 The study adds to a small body of literature that covers the impact of immigration on labor market outcomes in South Africa. Previous papers have generally found no impact on total income but negative effects on local employment. Compared to earlier research, this study makes several contributions including, use of industry-province level data; use of the instrumental variable (IV) approach to address endogeneity issues; the analysis includes all immigrants – not only men, as has been the case in some previous studies. The latter is especially significant given the substantial share (24%) of female employment among immigrants.

Further, the study estimates focus on the relationship between all locals and immigrants, and not on specific groups based on education and experience within each category that might capture partial effects. Finally, the study uses wage data from the Post-Apartheid Labor Market Series (PALMS) harmonized survey, instead of relying on total income from the Census that includes both labor and non-labor earnings as in other studies.

The study estimates the impact of immigration on labor market outcomes such as employ­ment and wages in South Africa between 1996 and 2011 and posits several explanations for its results. One of the explanations is the rate of self-employment among immigrants, which accounted for 25%  of total jobs for immigrants, compared to 16%  for locals.

These statistics reveal that immigrants are more likely to appear in entrepreneurial roles than locals. The study notes that because immigrants tend to have lower levels of risk-aversion, they are more likely to start new businesses or engage robustly in the informal economy. This engagement in entrepreneurial activities is likely to pro­mote economic growth by enhancing, for instance, the supply of small retail establishments. If those businesses are success­ful, they also will provide multiplier effects which may spread beyond the immediate family. Other important explanations for these results can be found in the study. 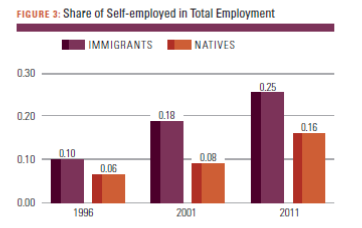 As one of the most urbanized countries in Africa, self-employment in major towns and cities is an important way in which access to livelihoods is secured by migrants and locals alike. These findings on the role of self-employment (among other reasons) in explaining the positive impact immigrants have is noteworthy for policy-makers and development actors in South Africa.

Crucially, the study highlights that these results provide an important foundation upon which further large-scale research could be developed. Such research could potentially complicate and enable a richer understanding for how migrants, refugees and asylum-seekers engage with the South African economy and the economic relationships they share with locals. The study concludes by suggesting that research, may for instance, consider how circular migration, informality, undoc­umented movements and gendered dimensions have implica­tions for economic relationships. Professor of Economics and Social Work at Boston College