Ending the Communicable and Non-communicable Disease Divide in Africa 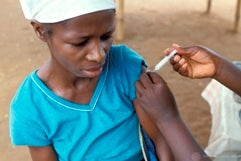 The 2011 UN Summit on Non-communicable Diseases (NCDs) elevated the importance of NCDs as a pressing global health challenge.  While this recognition was long overdue, are we at risk of establishing a new vertical program, in direct competition for scarce funding with existing communicable diseases control programs and health system strengthening initiatives?

If we pay close attention to available evidence, that should not be the case.  The health situation in sub-Saharan Africa nicely illustrates this point, as we have learned from an extensive review of the literature.

While the focus in this region has been on communicable diseases and maternal, perinatal and nutritional causes of morbidity and mortality, less attention has been paid to the extent to which these conditions contribute to the growing NCD burden and to potential common intervention strategies. Indeed the biggest increase in NCD deaths globally in the next decade is expected in Africa, where they are likely to become the leading cause of death by 2030.

The same underlying social conditions, such as poverty and insanitary environments, are associated with the onset of both communicable and non-communicable diseases, and there are close relationships between these disease groups in terms of causation, co-morbidity, and care.

Frequently, both communicable diseases and NCDs co-exist in the same individual, and one can increase the risk or impact of the other.  Some infections cause or are related to NCDs; for example cervical cancer, a leading killer of women in Africa, is caused by the human papilloma virus.  Treatment of communicable diseases can also increase NCD risk: Antiretroviral drug therapy for HIV is saving lives, but as the HIV-infected population ages, cardiovascular disease prevalence and mortality increase significantly as shown in recent research  (Tseng, ZH et al. 2012). NCDs or their risk factors can also increase the risk of infection; for example, smoking and diabetes each increase the risk of tuberculosis, and co-morbidity of tuberculosis and diabetes can worsen outcomes for both diseases.

Many maternal illnesses and behaviors affect children, including tobacco use, anemia, and over- and under-nutrition. Gestational diabetes is a strong predictor of future illness, both of the mother, who may develop diabetes and cardiovascular diseases later in life, and the child, who also becomes at risk. Poor maternal nutrition before and during pregnancy together with smoking tobacco during pregnancy contribute to poor intrauterine growth, resulting in low birth weight which in turn predisposes to NCD risk later in life. Thus, the current poverty of much of sub-Saharan Africa may result in an epidemic of cardiovascular diseases in middle age for those who survive. The problem is compounded by HIV/AIDS: for example, low birth weight and malnutrition are more frequent in HIV-infected children.

The potential risks of setting up yet another vertical program in resource-constrained countries such as those in Africa need to be acknowledged and overcome, with integration and resource-sharing where feasible in the health system.

For example, at the primary care level, maternal and child health programs could include combined interventions to alleviate malnutrition and reduce smoking in pregnant women, increase the uptake of breastfeeding, monitor birth weight, promote healthy nutrition in families, identify and manage hypertension and diabetes in pregnancy, and promote smoke-free homes.

Collaboration with reproductive and sexual health programs could promote the use of condoms and safe sex practices and raise awareness of early signs and symptoms of breast and cervical cancer.

The scope of immunization programs could be expanded to include not only vaccine-preventable diseases among children but also improved access to HPV vaccines to prevent cervical cancer and Hepatitis B vaccination to prevent liver cancer.  Models already exist for collaboration with tuberculosis control programs to benefit patients with non-infectious respiratory symptoms in primary care facilities, such as asthma and chronic obstructive pulmonary disease. Screening for hypertension and elevated blood sugar levels can be administered among people diagnosed with HIV infection.

Much illness and inefficient resource use can be avoided in sub-Saharan Africa – diseases and disabilities are frequently preventable – but comprehensive and systematic approaches need to be applied which build on existing resources and experience and capitalize on the inter-linkages between communicable diseases, NCDs, maternal and child health, and socio-economic development.

Although the largest share of costs of disease are borne by the individual concerned, Governments could play a catalytic role in tackling the main NCD risk factors as part of an integrated health agenda, since (i) there are substantial societal costs resulting from second-hand smoke and alcohol-induced injuries and fatalities; (ii) people are not always fully aware of the health (and other) consequences of unhealthy lifestyle choices such as smoking, alcohol abuse, physical inactivity, and poor diet; they may also be misled by information provided by the food, alcohol, and tobacco industries; and (iii) children and adolescents (and even adults) tend not to take into account the future consequences of their current choices, irrespective of whether they are informed about them.

More on the topic:

- The cat is out of the bag: UN summit on NCDs

- Toward a Healthy and Harmonious Life in China: Stemming the Rising Tide of Non-Communicable Diseases

- Dying Too Young: Addressing Premature Mortality and Ill Health due to Noncommunicable Diseases and Injuries in the Russian Federation

Thanks for the comment. As you suggested, indeed a serious rethinking is needed to address effectively the main causes of disease and mortality in Africa avoiding the trap of false dichotomies: prevention vs. treatment, primary care vs. hospitals, and communicable vs. non communicable diseases. As global evidence shows, given the double and even triple burden of disease in Africa, besides adopting an integrated approach at the health system level to deal with communicable and diseases and NCDs, the adoption and adaptation of population-based preventive strategies and actions, which are multisectoral in nature, are a cost-effective way to address major risk factors which are common across a number of diseases (e.g., smoking, alcohol abuse, obesity), and in some cases, are also shared risk factors for road traffic injuries (RTI). Population-wide interventions, such as fiscal and regulatory measures (e.g., excise taxes to increase the price of tobacco products, banning smoking in public places), which are not reliant on health services for delivery, have relatively low costs, most people will be exposed to them, and the people who are either at high risk of NCDs or RTIs, or already suffering from them, will also benefit.

Editor,
It is both tragic and ironic that the two classes of diseases resonate among themselves, each one adding to the burden of the other. This is more so in the third world where even the provision of potable water which was supposed to be realized by 1978 is still but a mirage.
Poverty is fueled by uncontrolled population growth, as the poor segments of society tend to have more children to help in odd jobs to earn income. the indiscriminate onslaught of HIV has further complicated the equation.
The solution lies at the very basics. Medical care and management of NCDs is much more expensive than for CDs yet governments are pouring scarce donor funds into the former while ignoring the latter.
If we were to provide clean, running water and safe disposal of waste matter to each and every household that alone would have a great impact on morbidity/mortality across both spectra of diseases.
In 2002, in an unpublished letter to major news houses in Kenya, I argued that putting PLWHA on ARVs on its own would not impact the progression of the disease, in the absence of supportive social structures and amenities that would over long-term relief.
In current medical practice in Africa we are becoming overwhelmed by the imposition of diseases of affluence ( diabetes, hypertension, cardiovascular diseases etc) on a population already on its knees from diseases of poverty( malnutrition, anemia, diarrhoeal diseases etc) together with convergence of HIV/AIDS, cancers and Road traffic accidents.
Serious thought needs to be given to the integration of lifestyle modification in school curricula so that children grow up knowing the consequences of poor life style habits. Education, prevention then treatment ought to be the order of care rather than the current treatment, prevention then education.

As global evidence shows, given the double and even triple burden of disease in Africa, besides adopting an integrated approach at the health system level to deal with communicable and diseases and NCDs, the adoption and adaptation of population-based preventive strategies and actions, which are multisectoral in nature, are a cost-effective way to address major risk factors which are common across a number of diseases

Thanks for your valuable comment. Indeed, as argued elsewhere, an effective response also needs to include multisectoral policies and actions for dealing with disease related risk behaviours, environmental factors, and their social and economic determinants in the entire population. International evidence indicates that measures such as some of those included in the WHO Framework Convention on Tobacco Control (for example, higher excise taxes to make tobacco products less affordable), are highly cost effective for disease prevention and control, complementing and reinforcing medical care interventions.

Thanks for a great post. As you know, health systems in resource-limited settings are often able to provide only episodic services for acute, symptomatic illness. In many countries, the national HIV/AIDS program is the first and only large-scale chronic disease program providing continuity care services. If and when funds become available to support NCD programs, they may find that adapting the locally-owned and contextually appropriate policies, systems and tools developed for HIV/AIDS programs will allow them to "jumpstart" NCD prevention, care and treatment.

Support for such pilot initiatives - and, critically, the associated operations research/implementation science needed to establish which approaches are effective, efficient and equitable - would be a high-impact use of donor funding.

Dear Colleagues--Attached please find the link to a recently published paper on the topic at the British Medical Journal:

or use this toll free link:
http://bmj.com/cgi/content/full/bmj.e5812?ijkey=6ASzFlPzz6TrKkW&keytype…

Hi! Would you mind if I share your blog with my twitter
group? There's a lot of folks that I think would really appreciate your content. Please let me know. Cheers