How Kenya became a world leader for mobile money 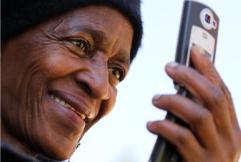 What if anyone owning a cell-phone, whether rich or poor, also had access to financial services with the ability to save and send money safely, no matter where they are located?  This is not science fiction; in fact it is already happening in Kenya, which has become the world’s market leader in mobile money.

Today, Kenya has more cell-phone subscriptions than adult citizens and more than 80 percent of those with a cell phone also use “mobile money” (or “M-PESA” which is very different from “mobile banking” as Michael Joseph–the former Safaricom CEO, and the man behind that revolution—can explain passionately!).

Internet access is also increasing rapidly, even though many are complaining about poor service by some operators. Within the next two years, Kenya could become one of the most connected, and modern economies in the developing world, and a unique case among the world’s poorer countries, that have an average annual income of below US$ 1000 per capita (see figure). 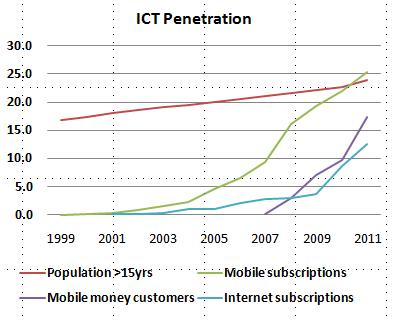 Source: World Bank calculations based on Communication Commission of Kenya

While the telecom revolution is not unique to Kenya, mobile money is. There are approximately 60 million mobile money users in the world, which means that almost one in three is a Kenyan. Half of all mobile money transactions are taking place in Kenya where annual transfers are now around US$ 10 billon.

The emerging social and economic impact has been remarkable. Businesses can operate more effectively: shop-owners don’t need to carry a lot of cash, or to stand in long queues at Banks to transfer money to suppliers. Urban dwellers no longer need to make overnight trips to their rural homes to pay their children’s school fees (or give money to relatives). Women have been empowered because their husbands have a harder time taking their money away. Even macroeconomic policy has become easier because the Central Bank has a better handle on the money in circulation, as mobile money helped to move cash from the mattresses to the market.

The success of mobile money in Kenya should be a source of national pride: it gives the country a global profile, which is only matched by the successes of its long-distance runners.

But Kenya’s global leadership in this area is also puzzling. Even Hillary Clinton wondered why this “brilliant innovation” is not available in the USA. How come mobile money has not yet taken off in other countries, especially those where money transfers from urban to rural areas are enormous even by Kenyan standards? If it is so beneficial to customers and operators, why have they not sought to replicate Kenya’s success, given that replication is so much easier than innovation?

There are three main reasons why mobile money took off in Kenya, while facing challenges in other countries (even though the India, Philippines, Nigeria, Tanzania and Uganda have started to catch up).

First, Kenya’s regulators enabled the mobile money take-off. The Central Bank in particular played a very progressive role and allowed “regulation to follow innovation”, while reassuring the market of its oversight. The regulator agreed that mobile money agents needed only limited requirements to enter the business, as they were not providing banking services, while the operator behaved as if it was regulated and periodically reported financial and usage data as Banks do.

Second, the strategy of the omnipresent operator – Safaricom – was also important. In 2007, the company already had more than 50 percent market share. Its strong position and national presence helped it to reach scale. But when replicating mobile money in other countries, such dominance by a single operator is not a precondition for mobile money to take off: many alternative models can also lead to success such as “third-party platforms” into which operators connect to. Even more important was the company’s business philosophy to “build a brand rather than make quick return”. Indeed, it took some three years until M-PESA generated a net-profit. However, it created indirect benefits from the beginning because in Kenya’s increasingly competitive market, mobile money boosted loyalty and attracted new customers to its core business of voice and SMS.

Third, Safaricom’s management understood that the success of M-PESA was ultimately about people management, not technology. Many innovations fail because management focuses exclusively on designing and launching a product, and assume that technology will take care of itself afterwards. The opposite is true. You need people to run machines and the interactions you get after product launch can generate even better products. The true secret of M-PESA’s success is the management of the agent network, which grew from 300 initially to almost 30,000 today.

There is no doubt that mobile money will soon go global, especially if countries consider the lessons from Kenya. In the whole world, there are still more than two billion people who have cell-phones but no Bank account: for these, mobile money is an extremely attractive proposition.

Note: This article draws on a forthcoming paper titled “Scaling-up through disruptive business models - The inside story of mobile money in Kenya” (by Pauline Vaughn, Wolfgang Fengler and Michael Joseph) which will be published by Brookings as part of a book project on “Scaling up for development impact”. Proud to be Kenyan.

I'm glad to hear some good news coming out of Africa

I think the three drivers you mention are correct, but you are missing one critical element that made M-Pesa successful. Kenya already had a strong culture of internal migration and domestic remittances. As people from the rural areas moved to Nairobi for work, they sent money back home in matatus and buses. When M-Pesa came along, there was already a huge market for remittances, which is why M-Pesa was able to scale up so quickly. The same is true of the Philippines, where Smart Money and G-Cash are beginning to take off. Many people move from the islands to the capital city of Manila, but still maintain strong ties to their family and community back home. In contrast, in a country like Ghana, where people move their entire families to Accra with them, that culture of remittances isn't as strong.

The real key to M-Pesa's success was the fact that it was a disruptive technology in a large existing market. M-Pesa did not create the market for remittances, but it did present the best option, and quickly overtook everything else.

I wrote about this on my own blog, Develop Economies

Wow!! I'm really impressed. This speaks volumes about successful management in a nation. And, will be carried to so many other areas.

Quite a good piece of info and in tandem with the goverment policy on financial inclusion as we move to more financial deepening.

Wolfgang, I think that the availability of traditional banking services plays a much bigger role in the success, or lack thereof, of M-Pesa-like services around the world. For example, only 10% of Kenyans have access to financial services, whereas the equivalent share is 48% in India and 46% in South Africa, two other markets where M-Pesa operates, but has met with less success. There is simply less repressed demand in these two countries. For more: http://blog.unibulmerchantservices.com/why-m-pesa-is-hugely-successful-….

This is awesome.. Good innovation from Kenya.. This should set an example to Africa and the rest of the world..

Wondering why Clinton was surprised that mobile money technology not in US.
1. Individuals rarely exchange cash as in Africa.
2. Almost everybody has a bank a/c --hence mobile banking
3. What would be the deposit/ collection point??  ATM?
Credit/ debit cards take care of all that.
The technology is appropriate in developing world but has little purpose in the developed world.

Well said...some technologies cannot simply be "copy pasted" from one country to another. The market dynamics are very different between the developed countries and developing nations

One development that is slowly increasing mobile money transfers is agency banking. Many mpesa agents are now also registered as agents of banks. This makes it easier to access to cash easier after regular banking hours, from the agent and load money to your mobile account through the same agent.
The mobile money culture is well entrenched in the Kenyan money market.

This is an amazing movement I have to say... but we still need to assist with the third-world situation before insisting how beneficial the economy is to Africa in general

while Kenyan are proud of their profound development in M-peas its time for Tanzania to take off as of recently innovations and channels available, not to mention the achievement so far made by MAX-MALIPO.