How severe will the poverty impacts of COVID-19 be in Africa?

As of early July, the infection and fatality numbers for COVID-19 (coronavirus) in Sub-Saharan Africa, with about 380,000 positive tests and 7,000 dead, appear low compared to global counts. However, since the pandemic is still unfolding, and lack of widespread testing calls for caution regarding its true reach, many questions remain unanswered. In this blog post, we explore answers to two questions: How many more people will fall into poverty? What is needed to emerge better from the crisis?

The swift and aggressive efforts by many African government to contain the disease, necessary as they are, have come at enormous economic cost. For the first time in 25 years, the region will go into recession. The region’s gross domestic product (GDP) per capita growth is now forecast to be three to five percentage points lower. We estimate that a decline in GDP per capita of 3%–the optimistic forecast for 2020 – will increase the number of Africans living below the international poverty line of $1.90 (2011 PPP) by 13 million. If the containment measures drag on for much longer, the downturn is prolonged or becomes even more severe, considerably more than 13 million will become poor. For instance, a 5% decline in GDP per capita could lead to poverty rates last seen in 2011, or send 50 million Sub-Saharan Africans into poverty. This is a huge setback. It would erase several years of hard-won progress in poverty reduction.

Figure 1: Poverty rate for SSA will increase more than 2 percentage points in 2020 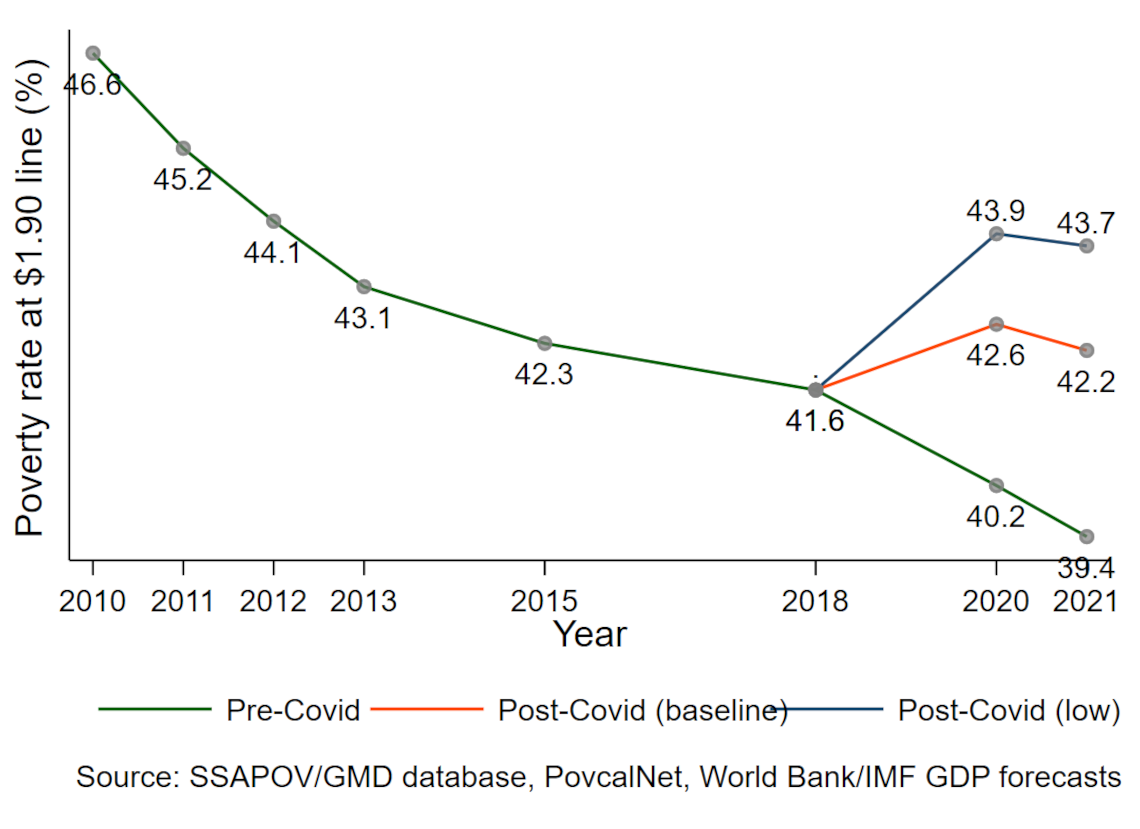 Behind these economy-wide changes are incalculable suffering by families and individuals. Disruption of essential services has been widespread. Millions of children are out of school. It is unclear when schools will reopen, and some students may never return. There is concern that many mothers and children will die from otherwise preventable diseases that are unattended to due to COVID. These too are massive setbacks, endangering years of progress in improving human capital in the region.

The lockdowns have also led to business closures, market disruptions, and job losses. The resulting income losses have been staggering. In Ethiopia, 45% of urban households and 55% of rural households contacted through a phone survey reported income losses due to COVID-19. In Nigeria, 79% of respondents reported income losses and 42% of those who were previously employed are no longer working. Transfers from local and international remittances have also evaporated as workers in domestic urban areas and international migrants are hit hard simultaneously.

These shocks have fallen harder on urban areas where the initial impacts of the lockdowns have been more intensely felt. Income losses have been larger for low-income and informal workers who are in jobs that cannot be done from home such as hospitality, retail, and distribution. Not surprisingly, we find that the profiles of the new poor differ in many ways from previous profiles of African poor. For instance, pre-COVID, only two in 10 poor Africans lived in urban areas. Post-COVID-19, the ratio is three in 10, a 10-percentage-point increase in the share of urban poor.

Given the scale of the challenge and uncertainty about the disease itself, a plethora of actions – cash transfers, food distributions, tax rebates, and so on – have been proposed (and in many cases taken) to save lives and livelihoods. However, a major challenge is that most of the new poor, who are mostly in urban areas (and previously non-poor), are likely to be missed by these interventions. So, what is needed to emerge better from the crisis? We offer two short-term solutions and three ideas for the medium term.

In the short term, we propose that policymakers use non-official but nonetheless informative data to provide support to the new poor. These could include using databases maintained by mutual aid communities, cooperatives, or call detail records of telecom companies. Additionally, we suggest that countries invest in high-frequency observatories to monitor how the shock is affecting families and deliver support. In the medium term, policymakers should consider building universal databases as even localized or specific group targeting will be better served by drawing on a universal database.

Two additional actions will be necessary to build resilience to future global shocks such as another pandemic, climate shock, or large-scale conflict. One is to invest in digital infrastructure, making it cheaper and available to everyone in much the same way we think of essential services such as electricity and water. The other is to strengthen incentives for sub-regional industrial production. Since many countries in Africa are too small to achieve this tradeoff at reasonable cost on their own, we would hope that there will be urgent commitment to sub-regional (if not regional) resilience.

Do you have ideas on how Africa can rebuild better from this crisis? We welcome your thoughts. Great piece. Will want to read more and share too

The government initiative to alleviate the suffering of the poor in some countries have also be fraught with irregularities and ineffective administration of the funds. For example, the N50BN earmarked by the Nigerian Government to be distributed to the economically active poor did not reach the last mile though funds was said to have been fully distributed. Less than 10% of customers of MFIs claimed to have benefitted. The distribution of the N50BN was only restricted to one MFB - NIRSAL MFB owned by the government but has lagging capacity to effect same.

I have heard you at the NCDI launch of report.
COVID-19 impact on poverty is now quite clear from your studies
However, I did not listen - still I will have to read the report - in the launch the impact of NCDIs on poverty. I think we have now TWO challenges for poverty alleviation, a chronic one and an acute one. Can we have an exchange of ideas?