Few countries can match Cabo Verde’s development progress over the past quarter of a century. Its Gross National Income per capita (GNI) grew six-fold. Extreme poverty fell by two-thirds from 30% in 2001 (when poverty measurement began) to 10% in 2015 (see first chart) which translates into an annual poverty reduction rate of 3.6%, outperforming any other African country during this period. Non-monetary poverty also dropped fast (see second chart). In many ways, Cabo Verde is a development star, and these achievements were made despite the disadvantage it faces as a small island economy in the middle of the Atlantic.

What lessons can be drawn? And what should Cabo Verde do to maintain this good performance and overcome its recent challenges? These were the topics on the table at four discussion events held across Cabo Verde last month , as part of the dissemination of the Systematic Country Diagnostic prepared by the World Bank and validated by the government. 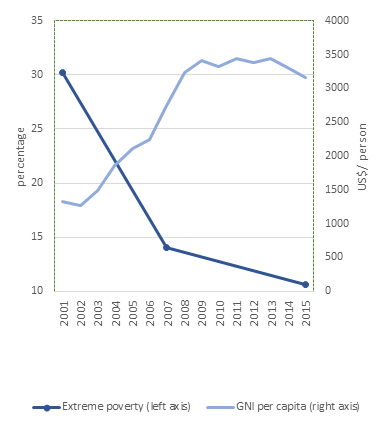 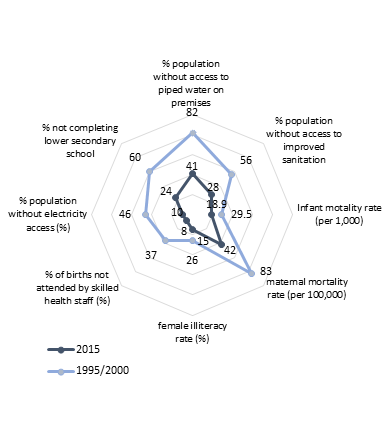 
Cabo Verde’s poverty reduction achievements are grounded in political stability and strong institutions as well as an open economy that has been driven by exponential growth of the tourism sector exploiting the country’s natural beauty. Investments in human capital have also played an important role. Its life expectancy is the second highest in Africa at 73, just after Mauritius. And in the global gender gap index Cabo Verde ranks among the world’s best in terms of health and survival, and school enrollment.

Even after the financial crisis of 2008, poverty continued to drop — albeit at a slower pace. Poverty reduction was highest in rural areas and most likely driven by investments in rural infrastructure such as the construction of dams and rural roads, together with the expansion of the electricity network and access to water, enabling expansion of irrigated horticulture for urban markets. Progress was fastest on the three islands with the highest number of poor: Santiago, Santo Antão and Fogo. An increase in remittances, rural to urban migration, and a reduction in the number of children per woman may also have played a role in rural poverty reduction.

The low economic growth between 2008 and 2016 highlights limitations in the current tourism model where 85-90% of all visitors stay in all-inclusive resorts with limited links to the rest of the economy. Youth unemployment is high (63% in the capital Praia), partly due to lack of skills and persistent school drop-out problems, and there are signs that crime is rising. Economic diversification is needed but has been hampered by a relatively weak business climate: Cabo Verde ranked 127th out of 190 countries in the Doing Business report 2018.

High public investments and low economic growth since 2008 have contributed to a rapid build-up of debt – currently at 128% of the gross domestic product. A significant part of the debt is held by weakly managed state-owned enterprises (SOEs) such as the social housing, electricity, and airline companies. This — together with growing climate change-related risks — poses a significant threat to the sustainability of Cabo Verde’s achievements.

Our study identifies five main areas of attention for maintaining Cabo Verde’s status as a development champion. We suggest the following action is urgently needed:

Cabo Verde has achieved star status as development champion. But to ensure the star continues to shine intensely, the country needs to act now. This will then illuminate its most likely pathway to progress: a diversified and more inclusive tourism sector and a scaling up of agriculture, livestock, and fisheries niche products. Or perhaps even becoming a logistic hub, or a digital and innovation hub, if the right conditions are created and private sector interest can be attracted. If the right action is taken now, Cabo Verde’s future will continue to be bright.