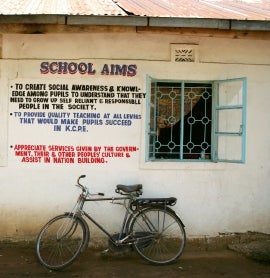 Over the last decade, there has been increasing enthusiasm for empowering poor people by giving them information.  For instance, sharing information about absentee teachers and doctors, the availability of drugs in clinics, and the effectiveness of development projects will enable poor people (the intended beneficiaries of these programs) to demand better services—and get them.

I share this enthusiasm and may even have contributed in a small way to it.  But at a recent aid data conference, I thought I’d consider the criticisms that such efforts have received, and some responses.

1.  They already know.  Poor people don’t need to be told that the teacher is absent from the public primary school.  Their children have been telling them this for years.  But the point of collecting these data is not to inform individual families about the quality of services in their own village: it is to let them know that the quality of services is poor in neighboring villages—and may be due to a failure in public policy.  Otherwise, some people may think that an absentee teacher is just another feature of the lot of the poor.  It is also important that the policymaker knows that everybody knows.

2.  They can’t absorb the information.  Note the contradiction with the first critique. True, these people work 14-hour days, and now we expect them to attend village meetings at the end of the day so we can inform them about the information we have collected.  Furthermore, how can illiterate parents understand data about their children’s schooling?  The facts, however, are different.  There is considerable evidence that illiterate parents have a better idea about their children’s learning than do literate parents.  The reason is that they care deeply about their children learning to read and write—the success of Peru’s Recurso program, where parents embraced a program where they tested children’s reading ability in the home, speaks for itself.  To be sure, we should not romanticize information.  A study in India of a program that awarded extra curriculum resources through a village education committee (VEC) revealed that, ten years into the program, 93 percent of the villagers had not heard of the VEC.  Of the remaining 7 percent, 70 percent (or 5 percent of the total) could not name a single member of the VEC—and this included people who were themselves members of the VEC!

3.  There is limited evidence that information improves outcomes.  True, most of the evidence on information campaigns and transparency more generally is about how these have affected intermediate indicators, not final outcomes.  For instance, the work on participatory budgeting only shows how the composition of budgets have changed—not whether the new composition is better for poor people.  There is even evidence that information can be harmful—as with hate radio broadcasts in Rwanda that, according to one study, contributed to 9 percent of the genocide.  The main reason for the paucity of evidence on outcomes is that the underlying service delivery failure is political, and it is difficult to disentangle the effects of information on the political system.  This takes us to the fourth criticism.

4.  When the problem is politics, information won’t help.  There is no question that the reasons for absentee teachers or poorly-built bridges have their roots in politics.  In many countries, teachers organize the campaigns of the local politicians, in return for which they get a job from which they can be absent.  But even in these circumstances, information can help.  The reason why these politicians continue to be elected—even if they are responsible for the poor quality of public education—is that voters don’t always associate the empty classrooms or clinics with a failure of the politician.  Knowing this, politicians have an incentive to obfuscate further—by, say, opening new schools or providing public works jobs (private goods) to target groups who would vote for them.  Information can help societies break out of this low-level political equilibrium.  If information can be presented to voters in an accessible and salient manner—for instance, teacher absentee rates broken down by the local politician’s constituency—then there is a chance that voters will be better informed at the next election.  And if the politician recognizes this, he or she may have an incentive to improve services before the election.

Shanta's article is about "informing the poor" which is a supply side accountability case and not about the poor demanding information for their own empowerment which is a demand side case.

When information "suppliers" determine what their "consumers" need and when their consumers end up not needing the information supplied that they need not ask for, then there is ground for no need to inform inform the poor.

There are types of information poor people need more than the ones obvious to them or couched for them by elites such as absentee teachers and doctors and availability of drugs in clinics and others that are disseminated as uncodable or policized messages.

Education is the key to solving Africa's problem where for instance in a country like Tanzania, over 80 percent of population do not even know their basic rights. Over the past 30 years, the ruling party has seen to it that corruption remain the status quo. In doing this, what has actually transpired is a deterioration in all basic services to the public in all sectors. Education, health, the courts. Today, schools in Tanzania do not have teachers to teach students. Education is a basic right of the people, and in a country like Tanzania which is the world's third largest gold producer and is unable to provide basic rights to its citizens. I strongly endorse education for the poor. People need to be educated. Most of Africa has one thing in common, the leaders of these countries have blocked education for their citizens but allowed their own children to be educated in expensive schools in the west. So that the status quo of corruption is sustained.

With respect to #4, depending on what the information is, it can be very helpful. Isn't rapid information transmittal one of the characteristics that made the "Arab Spring" successful?

Mohamed, thanks for your comment. In accountability--as with most things in life--there can be no demand side without a supply side. Of course poor people should be demanding information for their own empowerment, but somebody (perhaps the poor themselves) has to then supply that information for accountability to work. While I agree that sometimes people supply information assuming that is what will help poor people demand accountability, there are examples where supply-driven information campaigns have worked in empowering poor people to hold politicians accountable. Two from Uganda are the Public Expenditure Tracking Surveys in education (Reinikka and Svensson), and the report cards on health (Bjorklund and Svensson). I would extend your point about "types of information poor people need" to include the way in which information is conveyed to them. For instance, long reports with tables of data are not conducive to informing poor people; short videos, radio broadcasts and SMS messages may be more appropriate.

Ben Parkinson is running an innovative project in Uganda, which is training young people to develop their villages. They have a unique school, known as the Chrysalis School, which they are looking to sustain, by growing higher value crops in village locales. They would like to partner with a major US university to identify cash crops that might support the school's development. The project has been very successful in its pilot year, which is shortly to come to a close. You can see more at the School Blog at http://chrysalisuganda.wordpress.com , which has been commended by the organization Teach a Man to Fish. Note what the students say about their projects!

Examples of where they need help from University personnel
1) How can they improve their results growing and selling Sugar Baby watermelons and desert melons in tropical conditions?
(They believe the melon project can support their school)
2) What crops should they grow on a two acre plot to augment the diet of free range chickens and pigs such as moringa or corn?
3) What 25 fruit trees should they grow on a one acre plot so that they can sell a fruit basket containing a large variety of tropical fruit
4) What pesticides, fertilizer, veterinary supplies (i.e. vaccination against Newcastle disease, deworming for round worm and tapeworms, dusting under wings for irritating external parasites such as lice, treatment for chronic respiratory disease), micro-irrigation supplies, farm equipment, packaging, poultry supplies (i.e. poultry houses, feeders, waterers, nests, brooder, and incubators), fencing, training material, etc should they purchase? They must still make a profit.

This is an example of how one can inform the poor. NGO site for Chrysalis school http://www.socialenterpriseafrica.org/

Methods and composition is what justifies the approach for informing the poor to changes. In most cases partners in development tends to finance empowering poor people by giving information without taking in consideration the capacity and methods used. Information always increases knowledge and leads to understanding; at the end it triggers anger for demanding accountability, transparency and so on. Informed society is ready to die for only demanding changes, and this demands is what punish rulers (politicians) and forces to changes, look in Egypt, etc

Thanks Shanta for this blog post. It draws attention to a subject that is too often ignored by too many development practitioners: that information and communication processes are vital to many of the ends we seek to achieve in development, including the ability of ordinary citizens to hold their own governments and service providers accountable. I would like to add a few considerations:
1. Even poor villagers today live in a message-rich environment. To get them to pay attention to an issue, learn about it, etc requires serious thought and work.
2.The role of information in changing political behavior in developing countries(e.g moving from apathy to actively demanding accountability) is clearly crucial but too little studied or understood. In my own line of work, what I find is that most of the professors of political communication concentrate on studying the citizens of the United States and Europe. We need to encourage young scholars to tackle this line of research in non-Western societies.
3. Finally, the nature and structure of the domestic public sphere matters. Whether it is rich, plural and inclusive shapes access to information by the poor in quite decisive ways.

I participated on the mentioned AidData panel at the World Bank with Dr. Devarajan, and we discussed several possibilities for how information may matter in improving anti-poverty programs, how it might transform politics, and how we can measure these effects concretely. We indeed have much to learn.

Along these lines, my colleagues ant I at AidData and BYU's Political Economy and Development Lab have multiple projects underway aimed squarely at measuring the effects of information on development outcomes and the fight against political corruption. You can read more at http://blog.aiddata.org/

Thanks Shanta for the very thoughtful article on the roles information and communications play in poverty alleviation. I think that journalists also play an extremely important role in disseminating/communicating information on issues such as the budget, policy decisions, etc etc (assuming a free or free-ish press). However the challenge is that many local journos do not know how to parse data (budget data for eg)or analytical work (eg studies done by the WB), connect the dots, and make it accessible to the masses in a meaningful way. So training them to do this effectively is a critical first step in helping to empower poor people with information. Afterall, the press (and all it's attendant social media tools today) is supposed to be the Fourth Estate...