Soon after I turned 40, I started experiencing back problems. I asked my brother for advice (he is a medical doctor) but didn’t quite like what I heard. “Sorry brother, our bodies are just not built for us to live much beyond 40…” he told me. If you take human evolution as a reference, he is right.

For the first 59,900 years of our existence (out of a total of 60,000), people used to live only into their 30s, at best. During the 1000 or so years that followed, there were some modest improvements raising life expectancy to 40 years. Things really changed only in the past 100 years on the backdrop of major medical and sanitation breakthroughs.

Even until the mid-1950s, the average world citizen would have been lucky to reach the mid 40s (what we now call ‘mid-life’ in Europe). Rapid and successful poverty reduction, especially in East Asia, brought the world average to 70 years today. If advanced economies are any guide, many of us will make it to the respectable age of 80. So it’s basically our generation that, for the first time, has the luxury of contemplating a relatively long life.

Sub-Saharan Africa is not there yet though and only catching-up slowly. Between 1980 and 2000, life expectancy stagnated at around 50 years, before rising to 54 years. The continent still has a 16 year gap to close to reach the current world average.

Kenya even regressed before moving upward again. Kenyans’ life expectancy is slightly above the African average (56.5 years) but it has lost ground since the late 1980s (then 60 years and not far from the global average). It declined in the 90s to 51 years, mainly due to HIV/AIDS, before recovering over the last decade.

If the current trends continue, Kenya will return to its historical peak of 60 years, which it achieved in 1987, only in 2017. In other words, on this metric, Kenya has lost three decades (more than a generation). This is in stark contrast to East Asia, where China for instance has been exceeding the global average in life expectancy for a long time, even though it started below Kenya fifty years ago (see figure). 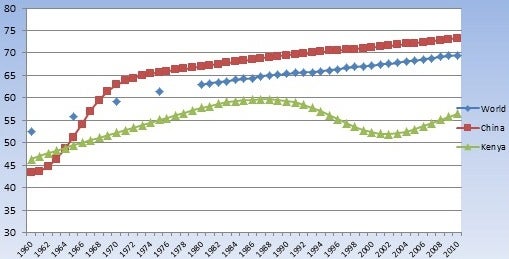 Since 1900, humans have begun to steadily live longer. Advances in public health – especially vaccines, penicillin, but also basic sanitation and hand washing – have driven a phenomenal reduction in diseases. Once countries’ health systems improve and their citizens live longer, they can begin to reap a demographic dividend.

What are the main drivers of life expectancy and what can countries do?

The single most effective lever is to reduce child mortality. In most poor countries, mortality is highest among young children (below the age of 5), especially infants (below 1 year). Once children reach the fifth birthday, their chances to live a long life improve dramatically.

People often worry that declining mortality will translate into an unmanageable population explosion. That fear is misguided, because birth rates also fall as mortality declines. Why is this? People will have fewer children if they can be reasonably confident that they will survive into adulthood. Also, people move to cities, economic growth takes place and women increasingly study and work: the first child is often later and family size shrinks.

The drop in child death rates followed by a dip in birth rates generates a demographic bulge: this large “extra” population at working age represents an opportunity. It can lead to growth and poverty reduction if the economy can productively employ all the new workers that accompany the bulge.

Many countries in Africa are starting to experience this demographic transition: population growth remains rapid but mainly because people live longer not because they have more children. Africa is now gaining 22 million people every year which is more than the 18 million citizens living in an average-sized African country. In Kenya there are 1 million “new” people each year, and that number is expected to remain stable (under the twin effect of falling fertility and longer life expectancy).

In Kenya and Africa there are now more working age adults than children and retirees combined. With better and longer schooling, an ‘education dividend’ is also emerging. All of this is underpinned by a ‘health dividend’, which helps Kenyans and many other people around the world to live a longer and healthier life. It then just needs more doctors to take care of people with back pain.

Why do you say 'Kenya and Africa'?

because Kenya's pattern is quite similar to the one of Africa, i.e. loosing experiencing a gap in life expectancy compared to the World average until 2000 which is only now starting to close again.

Thanks for your question

thank you for your insightful questions.

On your first question, it is right that traditional challenge of communicable disease remains important. Even though for example malaria- and AIDS-related deaths are declining, they are still too high. As Kenya’s economy modernizes and people live longer the country will need to go through a "dual burden" of health care provision as non-communicable diseases will be on the rise (cancer, diabetes, etc.) as you correctly highlight.

On your second question, Kenya can benefit from the demographic opportunity if the government manages it well. For example, infrastructure remains a big challenge as well as the investment climate to attract manufacturing companies to produce at the coast. But many countries have done it before and a population that lives longer does help in becoming economically more successful!

It can lead to growth and poverty reduction if the economy can productively employ all the new workers that accompany the bulge.

An average Kenyan at birth will expect to live longer but probably not healthier. As you have explained, changes in infant mortality have had a significant effect on Kenya’s life expectancy rates. So have changes in Adult mortality and especially after the introduction of ARVs.

In the last decade, the world's global health programs have concentrated on infectious disease like HIV/AIDS, Malaria and tuberculosis. Non-communicable disease like diabetes, cancer, heart and lung disease have not really been a priority in Kenya. Unfortunately, due to data paucity it is not easy to project the proportion of kenyans affected by these morbidities. Mostly, these morbidities are linked to lifestyle choices, but also can worsen due to poor diet, smoking, alcohol use, or environmental. With the upcoming middle class in Kenya, lifestyle is also changing: increasing abuse of alcohol and drugs, nyama choma etc. Obesity, a major risk factor for diabetes, heart disease and some types of cancers will probably become an important health issue. Given the current mode of life, and as Kenyans live longer, how long will they live without disability?

Besides, With the many social and economic challenges that Kenya is facing today one of the question that I keep asking myself is, will Kenya be able to benefit from the demographic window of opportunity that is being created by the ongoing process of demographic transition?