A common belief in rich countries is that people in Africa are poor but happy. This image is time and again confirmed by popular reality shows on Western television, in which the rich-and-famous visit little-known tribes in the most remote villages of rural Africa, only to concede, in front of a dozen cameras, that despite all their hardship, the people they visited really seemed happier than the average burnt-out desk-warrior in their home countries.

Are the poor in Africa really happier? In recent years economists started focusing on happiness and its measurement, a field long considered too trivial to pay much attention to. Recent research on the topic gives conflicting, and sometimes surprising, results. In 2012, an Ipsos poll measuring the degree of happiness in 24 countries found that self-reported levels of happiness were higher in poor and middle-income countries than in rich ones, seemingly confirming popular beliefs.  In contrast, the first World Happiness Report, also published in 2012, finds that the rich countries in Scandinavia are the happiest on earth, while four poor Sub-Saharan African countries are at the bottom of the list. The Gross National Happiness (GNH) index, pioneered by the Kingdom of Bhutan, comes up with a number of surprises of its own: the GNH is highest among the young and the unemployed (and also-perhaps less surprising-among the unmarried), which seems at odds with today’s television images of the streets of Madrid and Athens.

Most of the happiness data used in the studies come from the European Social Surveys and World Values Surveys, which typically include only a few African countries. For instance, over the past decade only nine of the 48 countries in Sub-Saharan Africa were included in the World Values Survey. Similarly, the Ipsos poll included only one country from Africa south of the Sahara, and probably the least representative one: South Africa. Happiness data do however exist for a surprisingly large number of African countries. Based on responses to survey questions that ask respondents to rate their overall happiness with “life-as-a-whole”, Ruut Veenhoven and colleagues at Erasmus University have created a “World Database of Happiness”. This database contains responses to equivalent “happiness-with-life” questions from different sources and different surveys for 148 nations for the period 2000- 2009. Thirty-four of these countries are in Sub-Sahara Africa.

What do the data say about happiness in Africa? By and large, people in Sub-Saharan Africa do not appear to be particularly happy (Figure 1). The median level of happiness-with-life in the 34 Sub-Saharan African countries for which there are data amounts to 4.4, significantly lower than the happiness levels in South America (6.7), the Eurozone countries (7.1) and the United States and Canada (7.6). Given that the African continent generally has higher poverty rates than all of these other blocs, it does not appear from Figure 1 that poor people are happier. Within the Eurozone for instance, the countries with the lowest happiness levels (Portugal, Slovakia and Estonia) are also the ones with the lowest GNI per capita. 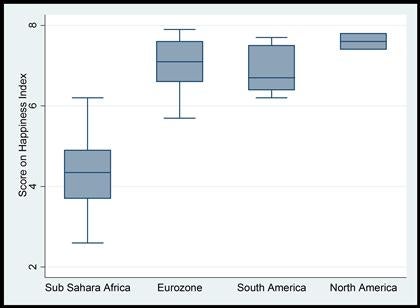 Another striking feature in Figure 1 is that levels of happiness vary the most among countries in Sub-Sahara Africa. The interquartile range, a commonly used statistical measure of dispersion amounts to 1.2 for Africa compared to 1 for the Eurozone and 1.1 for South America (since there are only two countries in North America, their interquartile range makes little sense). The difference between the happiest African country (Malawi) and the least happy (Togo) amounts to 3.6. Given that levels of poverty also fluctuate widely among African countries, is there a link between the two variables?

Yes there is, although the link is rather weak (maybe due to small sample size). Figure 2 shows that in the 34 sampled countries, there is a negative link between levels of poverty (based on the international poverty line) and levels of happiness. The relation is far from exact though: Poor Malawi (poverty headcount of 74% according to World Development Indicators) emerges as the happiest country in Africa (score of 6.2 on happiness index), while less poor Togo (headcount of 39%) has the lowest worldwide happiness score (2.8). The least poor country in our sample, Cameroon, also has happiness levels well below those of the poorest country, the Democratic Republic of Congo (would Congolese music have anything to do with that?).

In sum, the data do not on average support the belief that “African people are poor but happy”. Departing from average correlations, there are however a good number of African countries that are a lot happier than their poverty levels would suggest. So “poor but happy?” No. But “poor and unhappy?” Not necessarily.

Figure 2: Poor and Unhappy?
(Correlation between Levels of Happiness and Levels of Poverty in the 2000s) 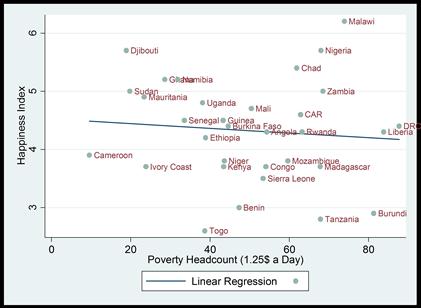 Warning: Data on happiness are notoriously subjective and culture- and country-specific and should be interpreted with a healthy dose of caution. A happiness level of, say, 5 might not mean the exact same level of genuine happiness in another country with the same numerical level. As a result, the graphs and numbers presented in this post should not be considered “scientific”. Is the life you're living the one you thought you'd live. I don't know anyone who thinks that, although maybe there are people who do. It is somewhat radical that the World Bank should measure wealth by happiness. It is somewhat ironic, too. It's time. When everything is said and done, there is a more relevant question.

Is life really worth living.

By even saying those words, am I suggesting that life is not worth the struggle.

I have another question: Isn't it maddening to people who have everything that other people in the world still starve, still struggle with disease, still can't find shelter, clothing, care, refuse from war.

Measure that. It's called indifference.