Rising from the Ashes: How fires in Addis Ababa are shedding light on the need for resilience 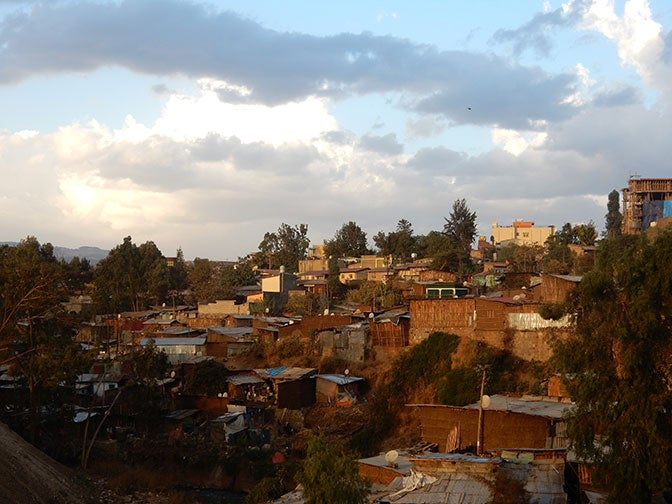 On January 22, 2012 at 6:00 am in the morning, Ethiopians living in the Efoyta Market neighborhood in Addis Ababa woke up to a burning five-story building. More than 13 hours later, the fire had killed two people, destroyed 65,000 square miles including several homes and businesses, and produced damages amounting to ETB 20 million ($1 million), a huge amount in a country where nearly 30% of the population live on less than  $1.90 a day.

The fire was caused by a gas cylinder explosion at a restaurant on the second floor of the building. Due to the flammable nature of the materials used in the construction, within minutes, the fire spread to the entire building. The lack of a proper fire escape forced two young men to jump from the third floor, who later died as a result of injuries from their jumps.

Urban fire is only one of the challenges that Addis Ababa, the 3.5 million-people capital of Ethiopia, is facing as a result of its fast and unplanned urban growth. Addis Ababa’s population is growing at 3.8% per year, making it the fifth fastest growing city in Africa. As new people have moved to the city looking for economic opportunities, the city faces the challenge of providing adequate housing and urban services to its residents. As a result, many have been faced with having to live in poor quality housing and resorting to unsafe electrical wiring and cooking practices – which has led to urban fire. Many are also affected by urban flooding because they have settled near rivers, while others have been affected by inadequate road drainage and lack of capacity of sewerage systems. Unemployment and social vulnerability also impacts many residents of Addis, despite of it being a place attracting migrants looking for better economic opportunities. On top of the man-made shocks that the city is facing, Addis is also exposed to earthquakes and water scarcity.

In an effort to overcome its challenges, in 2015, the Addis Ababa government requested the implementation of the CityStrength Diagnostic, a rapid assessment of urban resilience. The methodology was developed by the World Bank with support from the Global Facility for Disaster Reduction and Recovery (GFDRR). The objective of the CityStrength Diagnostic is to identify and prioritize actions and investments that cities can take on to enhance the city’s resilience to natural and man-made shocks and stresses, to be undertaken with their own resources or with support from development partners such as the World Bank.

Summary of the Engagement in Addis Ababa:

With the commitment from city leadership, the engagement in Addis Ababa was a success. A wide variety of stakeholders were involved throughout all stages all the tool, including national and city leaders, as well as non-government representatives, allowing the process to be inclusive and offering different perspectives across five priority sectors for the city: urban development, disaster risk management and climate change adaptation, community and social protection, transport, energy, and water and sanitation. The different channels of engagement provided a holistic assessment of the resilience of the city.

The diagnostic found that enhancing resilience in Addis Ababa requires actions and investments oriented toward implementing existing plans and regulations, establishing clear and capacitated leadership on risk management topics, and investing in infrastructure that meets existing and future needs.

The geographic location and topographic features of Addis Ababa, compounded by the lack of proper drainage and sewerage system and limited road network, exposes the city to frequent flooding as well as landslides.  Floods make it impossible for pedestrians to cross the roads in some areas of the city. While some opt to stay put until the floods subside, others pay street boys to get them across on piggy backs, who risk their lives and that of their clients for a small payment. The floods also disrupt traffic and cause accidents and congestion which presents a high cost to its residents.

As a follow up to the CityStrength process in Addis Ababa, the government requested support in assessing urban resilience at the national level, covering nine regional capitals and Dire Dawa, the country’s second largest city. The national assessment is currently being finalized, and as a special request from the government, the engagement drilled down on the country’s building regulations and emergency management guidelines to operationalize the national strategy on fire and other disaster prevention measures in urban areas.

Ethiopia is committed to the urban resilience agenda, an essential component in the achievement of its development objectives.

To read more about the CityStrength Diagnostic in Addis Ababa, please refer to the report: http://www.worldbank.org/en/topic/urbandevelopment/publication/addis-ababa-ethiopia-enhancing-urban-resilience

To find out more about the CityStrength Program, please visit: www.worldbank.org/citystrength