For developed cities with effective waste management systems in place, this is an easy stat to ignore. Once trash is binned, it is quickly forgotten – and users can rest assured that it will make its way to an appropriate disposal site.

Emerging hubs like Dar es Salaam, however, do not share this privilege – and the reality of waste production is increasingly apparent.

Approximately 4,500 tonnes of waste is produced every day in Dar es Salaam – but only about one quarter makes it to the dump site. The rest is buried, burned, or dumped in open spaces and waterways. When waste makes its way into those waterways, it directly increases the city’s risk of flooding.

Several activities have been supported by the Tanzania Urban Resilience Programme (TURP), a partnership between the United Kingdom's Department for International Development and the World Bank, to identify the extent of this risk and guide initiatives for improved waste management and producer accountability. In 2018, this involved a cleanup campaign that mobilized 26,000 citizens and resulted in the collection of over 500,000 kg of waste. A comprehensive waste audit was conducted as part of the cleanup, and the top polluters behind Dar es Salaam’s growing waste issue were identified.

Although the presence of waste in waterways is impossible to ignore, there continues to be a lack of awareness on the connection between solid waste and flooding in the city – allowing the issue to proliferate. This is something that TURP has aimed to address through a series of creative engagements.

Each year, TURP hosts Understanding Risk Tanzania (URTZ), a conference associated with the Global Facility for Disaster Reduction and Recovery’s Understanding Risk community that convenes experts, decision-makers, and community to discuss and debate issues of risk and resilience. This year’s event put the issue of waste front and center, quite literally.

Adopting a ‘zero waste’ approach to event management and design – all conference branding, signage, and materials were creatively composed of upcycled, recycled, or compostable materials, and no waste-to-dump was produced over the course of the forum. As part of the conference, Tanzanian creatives were invited to make art out of the top polluting materials identified in the 2018 waste audit. Emerging artists such as Nickson Jerimiah were inspired to put the obstructed waterways of the country on display, demanding the attention of the community, producers and decision-makers attending the conference.

Pieces submitted for the exhibition varied in form and in messaging. Some were abstract, others direct. Many carried elements of shock, including several works that featured medical waste found polluting urban beaches. Two immense pieces starkly alluded to the disproportional impact of flooding on urban poor people, children, and women.

As agents of change and cultural shift, artists like Jerimiah are vital to the betterment of society. Art invites its audience to confront reality, question the status quo, and envision alternative futures.

Recognizing this potential, the exhibition has been mobile for an extended reach. Images of the pieces have co-opted advertising spaces on Dar es Salaam’s Bus Rapid Transit (BRT) System, accompanied by behavioral change messages that urge the campaign’s audience of over 60,000 per day to rethink their consumption habits.

This messaging is also being transferred to youth through interactive workshops and challenges for secondary and post-secondary students. 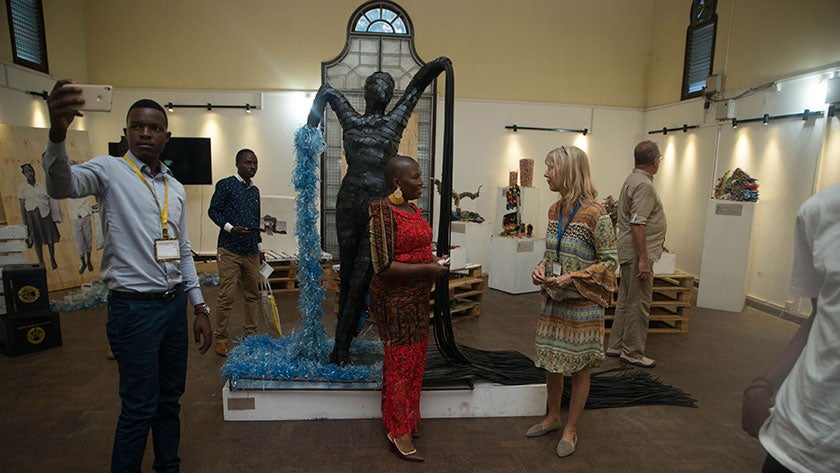 Artist Safina Kimbokota presents her work on the resilience of women, made with waste materials, at the Creating Resilience Exhibition at the National Museum.

After participating in a URTZ workshop on production lifecycles and flooding, 20 secondary students have returned to their schools where they continue to lead their own creative educational initiatives, collectively informing more than 1200 students about the connection between solid waste and flooding, and advocating for a ‘circular’ or ‘zero waste’ economy through art.

Post-secondary students involved in theData Visualization Challenge hosted by the Resilience Academy, an initiative aiming to mainstream education on resilient urban planning at URTZ, have further transformed raw data into informative designs that can guide the work of those within the field of Disaster Risk Reduction. The winning team, student founders of Taka Cycle, took advantage of the forum as a platform to present their digital app that compiles community data points to improve waste management across Dar es Salaam.

Although the impact of art and design on societal change may be challenging to quantify, a strong case can be made for continued outreach. These engagements form part of a larger movement that aims to merge art with science and communities for increased risk awareness and resilience-building. The Art of Resilience exhibition, which debuted at the World Bank headquarters the same month as
URTZ, provides guidance on how to impactfully integrate art into development projects. Jeremiah’s piece “The City of My Dreams” is featured in the global exhibition’s online gallery.

Risk is something we can collectively work to mitigate, and well-designed risk communication can play a vital role in ensuring that everyone – communities, producers, and decision-makers alike – understands this. It can improve comprehension of linkages between consumption and flooding, inspire close examination of product lifecycles as a whole, and motivate transformative shifts in behavior for reduced risk and environmental destruction.