Tanzania: Water is life, but access remains a problem 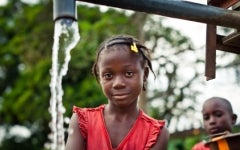 Let's think together: Every week the World Bank team in Tanzania wants to stimulate your thinking by sharing data from recent official surveys in Tanzania and ask you a couple of questions. This post is also published in the Tanzanian newspaper The Citizen every Sunday.

There is no doubt about the importance of water to human existence. People need clean water to survive and stay healthy. Lack of clean water contributes to the high mortality rates in children around the world. Water is also critical to a country’s development as it is needed not only for agricultural productivity but also for industrial production. Yet access to water remains a major challenge in many countries. Tanzania has been blessed, both on the surface and below ground, with three times more renewable water resources than Kenya and 37 per cent more than Uganda.

Despite the vast amounts of fresh water available, many Tanzanians are still faced with water shortages due to insufficient capacity to access and store  it both in rural and urban areas. Few households have access to clean drinking water from a piped source. Only a small fraction of rural households can access water to irrigate their farms. The following statistics illustrate the magnitude of the problem:

Improving access to water requires a combination of actions on hard infrastructure and systems. There is need to build pipes, irrigation systems and pumps in both urban and rural areas. Fortunately, the Government has started to take action and has significantly increased public resources to the water sector, from Sh183 billion in 2007/8 to Sh575 billion in 2011/12. Maintenance of existing systems, however, has been neglected as well as the development of new delivery mechanisms, such as partnerships with private operators and communities. There is also a need to rethink the distribution of responsibilities between the central and local governments and to be clearer on who will pay for water use.

Note: The statistics are extracted from the Demographic and Health Surveys (1991/92, 2010), the National Panel Survey 2010/11, the CIA Factbook, and the Water and Sanitation Program 2011 report. All are publicly available. We need to find the proper incentives that will allow private enterprise to economically build the infrastructure needed to provide water. The incentives simply are not there at the moment, the government has proven to be inefficient in solving the problem by itself...

We are blessed with abundant fresh water resources in East Africa, but even so, clean water is a still a big challenge to many. Central and Local Governments will need to invest a lot more in water purification technologies, protection of wells for rural communities, etc.
http://ugandauniversity.com

Like many poor nations around the world, Tanzania suffers from serious issues involving its people in regards to water. Stakeholders of the water industry in the country have been experiencing many challenges and hardships towards the development of the water sector, the result of which have not been providing solutions to a better achievement.