When Good Is Not Good Enough For 40 Million Tanzanians 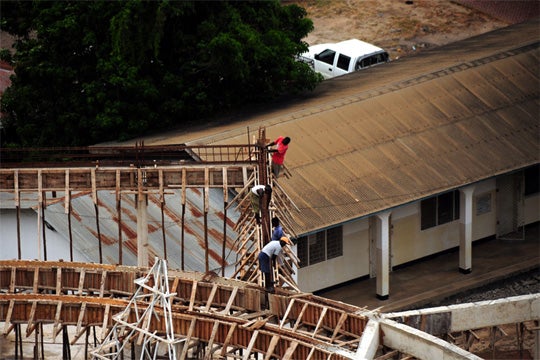 Tanzania has undoubtedly performed well over the past decade, with growth that has averaged approximately 7% per year, thanks to the emergence of a few strategic areas such as communication, finance, construction, and transport. However, this remarkable performance may not be enough to provide a sufficient number of decent or productive jobs to a fast-growing population that will double in the next 15 years. With a current workforce of about 20 million workers and an unemployment rate of only 2%, the challenge for Tanzanians clearly does not lie with securing a job. Rather, it is to secure a job with decent earnings.

In 2012, the average working Tanzanian earned the equivalent of $1,200 per year, one of the lowest earning levels in the world. Most workers, about 85%, are employed in traditionally low-productivity areas such as agriculture, retail trade, and small-scale mining where the output per worker is averaging only $700 per year. By contrast, output by worker averaged $4,500 in emerging industries.

By 2030, Tanzania’s workforce will grow to 40 million workers who will need productive jobs. International experience suggests that the workforce will have to shift from traditional toward emerging businesses to create them. In Thailand, for example, agriculture represented 80% of the employment force in 1990, while it was only 50% by 2005. In Indonesia, the share of agriculture in total employment declined by almost 20 percentage points between 1990 and 2010.

Can Tanzania replicate such structural shifts in the next 15 years? The response is negative if the economy continues on its recent trajectory. Indeed, at current growth rates, the share of the population employed in emerging industries will marginally increase from 14 to 22% between 2012 and 2030. Perhaps not so bad, but the average annual income per worker will only increase to $1900 by 2030 –approximately the level reported by Senegal today (Figure).


This modest structural transformation of the Tanzania employment force is not explained by the lack of dynamism in emerging businesses. Their average annual growth rate has been close 10% per year since 2008, which is higher that rates reported by Indonesia (8%) and Thailand (6%) during the same period. Arguably, it will be difficult for Tanzania to do much better in the foreseeable future.

Everything else equal, it will take simply more time for Tanzania to increase her share of the labor force working in emerging businesses, where currently, only 15% of Tanzanians are employed. The starting point was more than 20% and almost 40% in Thailand and Indonesia. Another explanation is that the rapid growth of modern businesses has not been accompanied by a similar increase in jobs. This is expected for low-labor intensive areas such as finance and communication, but it also happened to some extent for construction and tourism. While growth in the construction industry surged at a cumulative rate of more than 50% in the last five years, employment in this sector only increased by 25%.

What needs to be done for creating productive jobs in Tanzania?

The answer to this question is at the center of the World Bank’s recent Tanzania Country Economic Memorandum: Productive Jobs Wanted (CEM). To succeed, productivity will need to increase in traditional areas, which will continue to employ the majority of Tanzanian in the coming years. In parallel, the economy will need to extent and diversify toward new industries and markets.

These two objectives will require a combination of actions that are detailed in the CEM, as well as many examples of concrete actions based on international best practices and Tanzania’s relevant experiences.

While cross-cutting actions are central, policy-making might require some degree of specificity – otherwise there is a risk of diluting implementation and wasting scarce public resources. For this reason, the Country Economic Memorandum also attempts to identify some industries on the basis of the country’s comparative advantage, their potential for growth, and for their ability to create multiple jobs. Along those lines, the movie industry, or ‘Swahiliwood,’ can create multiple jobs in the right environment. Short-term opportunities also exist in the leather industry, high-value vegetables and tourism. Such drive can be encouraged by a focus on quality (raising standards and skills), improving access to regional and global markets (port efficiency), and possibly pro-active promotion policies in selected areas.

Business as usual will bring Tanzania at the current level of income per worker in Senegal, hardly the kind of progress that Tanzanians expect in the next 15 years. Yet, with the right policies, one can expect Tanzania to become the Vietnam, Indonesia or even the Thailand of tomorrow.

Let’s assume that the implementation of the CEM action plan will lead to an increase in additional productivity of 1-2% per year compared to historical rates. In that case, the average income per worker will reach almost $3,000 (in 2012 dollars) by 2030 or close to the levels reported by Vietnam today. If Tanzania can generate additional productivity gains in the range of 5%, over the recent historical trend, the average income per capita will reach $6,000 by 2030! This is Thailand today. Such goal might appear very ambitious but possible if the above mentioned action plan is implemented with a sense of urgency and the country adequately manages its resources derived from natural gas. Such performance was achieved by China over the past decade and by other emerging economies during shorter of periods of time. Of course, to replicate these successes, Tanzania’s will not just need to be good, but very good. According to Tanzania Vision 2025 expects to be the Middle Income Country in 2025 year but without impoving economic infrastructures like manufacturing industries, railways,airports,habour, electricity, roads to productive areas and improving agriculture will lead to small creation of employment opportunities. Government of Tanzania have to committed in developing the country and not for their families through corruption, money laundary and embezzling national resources for their interests. So many challenges Tanzania do meet far economically.

However, there are a number of external factors which impede development in Tanzania, internal challenges particularly governance and others are well noted. Every day we come up with the new policies and strategies but they fall short in implementation phase. It is the high time to investigate the complex nature of our underdevelopment using the emic (indigenous) perspectives, and therefore prescribing viable solutions. But this can only be done after enhancing the capabilities of individual citizen by consolidating social services and basic needs in the principle of equity and universal coverage. It is only through these ways where all citizens will no longer fear about their next meal rather than concentrating in issues which affects their daily lives.

With globalization in, around and outside Tanzania one cannot speak about development without marrying positive and normative economics. Too much positive economics is invading Tanzania from the Western world at the expense of normative economics. Since culturally Tanzanians are more normative than positive, it will take long time before the culture of scientific technology prevails over the culture of normative technology! Basic skills such as digital numeracy and critical literacy are far from the reach of most university graduates in Tanzania. In addition, English as a medium of learning compounds the problem, simply because it has not yet become the working cognitive technology that allows a university graduate to analyse development problems, synthesize development policies and evaluate the outcome of designed strategic planns intended to implement the policies!