Kenya is one of the countries that did not achieve the Millennium Development Goal (MDG) for increasing access to water and sanitation. Only 30% of Kenyans have access to improved sanitation, that is, the use of sanitation facilities that hygienically separate excreta from human contact. This means that approximately 30 million Kenyans are still using unsafe sanitation methods like rudimentary types of latrines, and almost six million are defecating in the open. 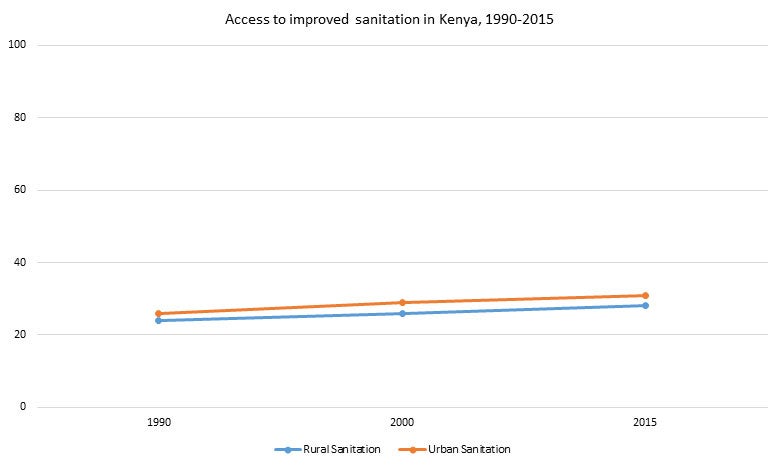 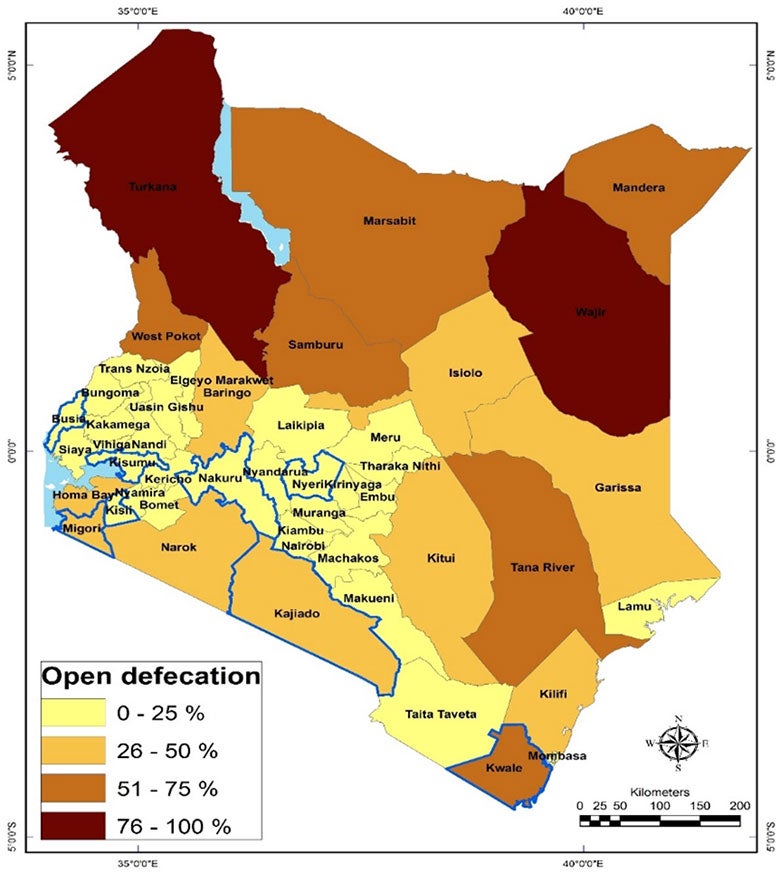 Access to improved sanitation is a major challenge both in urban and rural areas. In the rural areas, people continue to defecate in the open (15% against 3% in urban areas), primarily due to availability of open land, but also because it is considered culturally appropriate in some regions. The northern counties specifically continue to present very high rates of open defecation, which is also linked to high poverty levels. As the population grows, development takes place and resources become scarcer, the impacts of unsafe disposal of human waste are beginning to bite. This is particularly so for communities that depend on unprotected surface water sources like water pans or shallow groundwater sources. Since replenishment of these sources happens when it rains, open defecation results in direct contamination of the water sources with fecal waste.

In urban areas, the challenge is even more daunting as urban growth outstrips the provision of basic services, sanitation included. Secondly, urban planning hardly precedes settlement, making it much harder for utilities to provide water and sanitation services. Thirdly, having a toilet, either connected or not connected to a piped wastewater system is only one part of fecal waste management.

Other issues at play are how safely the waste is contained, emptied, transported, treated and disposed of. This is the new focus of the Sustainable Development Goals (SDGs) which have shifted from only addressing access to sanitation facilities to considering safe waste management along the entire sanitation service chain, from waste generation to disposal or re-use.

Sanitation in the urban areas is further compounded by the inter-linkages with other services including storm water drainage, solid waste and water supply. For instance, Wajir town has a high groundwater table and shallow water wells, which are the main source of water for domestic and livestock use. This makes the construction of simple pit latrines unfeasible. Instead, about 68% of the 100,000 residents use bucket latrines, a system introduced during the colonial times to protect the groundwater. During the rainy seasons, fecal waste overflow from buckets is swept away by the storm water, resulting in fecal contamination of the shallow wells. Consequently, Wajir town suffers from frequent outbreaks of waterborne diseases especially cholera and diarrhea.

The Constitution of Kenya makes access to some basic services including sanitation a basic right for all, further reinforcing the need to urgently respond to the prevailing sanitation crisis.

The first step is acknowledging that we have a huge challenge that calls for rethinking of strategies, and to have champions of change both at the national and local levels.

Kenya should make all efforts to Implementing the roadmap that aims to make the country open defecation free by 2020 will be key, as well as harmonizing approaches between sectors such as health, water, planning, urban, and environment. It is equally critical that existing policies, legislations and regulation both at the national and sub-national levels are reviewed and a multi-sectoral approach adopted.

Increasing sanitation financing and focus on better targeted and more inclusive interventions will also help Kenya reach its sanitation goals. This includes reviewing the need for targeted subsidies to improve sanitation in rural areas where mostly on-site sanitation is the norm, and embracing city-wide inclusive sanitation that looks beyond sewerage in urban areas.

Finally, universal sanitation cannot be achieved without strong stakeholder engagement and community consultations. This will ensure that the right solutions are being proposed and collectively implemented to assure sustainability. Lets face it! Social Behavior Change Communication plays a key role especially in far flung counties in Kenya like Wajir, Turkana etc. Priority also need to be given to WASH by devolved governments otherwise SDG #6 will be a pipe dream for current and future generations. Lastly, simple, affordable and easily adoptable technologies need to be embraced and community involvement encouraged. More action and less round table talks are way to go!