Ghana has suffered from large fiscal volatility around election cycles for the past two decades. This volatility has been identified as one of the key challenges for Ghana’s future development path in the 2018 World Bank Systematic Country Diagnostic. Fiscal deficits increased sharply and above 5% of gross domestic production (GDP) in all but the 2004 election year since 2000. At 11.5% of GDP, 2012 had the largest ever recorded fiscal deficit in Ghana. And the level of overshooting in fiscal election cycles has increased over the past decade with the discovery of offshore oil fields in 2017. Between 2005 and 2012, public expenditure rose rapidly – related to increased spending on wages due to the introduction of the single spine salary structure, which standardized the public sector pay scale across Government entities and grade levels – from 20 to 30% of GDP.

Fiscal policy in Ghana is notably procyclical. The cyclicality of public expenditure can be measured as the correlation between real government expenditure and real GDP (the business cycle). Ghana was among the most procyclical countries over the period 1980 to 1999, with a correlation of 0.7 (figure 1a). And there is a clear bias towards overspending during good times, which explains why procyclicality is higher in boom than in bust periods (figure 1b). Strikingly, Ghana has become even more procyclical in the recent period 2000-17, while many countries were able to leave fiscal procyclicality behind.

In an attempt to overcome the fiscal election cycles, Ghana introduced a fiscal responsibility law and a Fiscal Council in December 2018. The law establishes a de facto 5% cap on fiscal deficits in any given year. While this is a relatively high annual ceiling (the West Africa Monetary Zone primary convergence criteria for fiscal deficit is 4% of GDP), it is a suitable target to contain excessive fiscal over-expenditure in election years, where deficits tend to overshoot. While the exact implementation of the Fiscal Council, which ideally would be an independent body with sanctioning authority, is still the subject of public discourse in Ghana, the establishment of the law and the council are critical first steps to lock in a sustainable long-term fiscal path.

The next election cycle (2020) will likely fall into a boom phase. In a stark contrast to the mere 3.4% real GDP growth in the last cycle (2016), growth is expected to be above 6% over the period 2019 to 2021, and potentially higher if oil output can be increased in the short-term. The macro-fiscal economy is largely back on track after years of adjustment, supported by the World Bank and the International Monetary Fund. This means that Ghana will go into the next fiscal election cycle in 2020 from a much stronger position than in 2016. There are downsides as well, of course, as witnessed by the recent banking sector resolutions, which cost the equivalent of 3.4% of GDP in 2018. But the medium-term fiscal outlook is still positive. With the fiscal responsibility law and the fiscal council now in place, the 2020 election provides a unique opportunity to break the ever-increasing fiscal election cycles as strong economic growth in the medium-term does not require additional fiscal stimulus in 2020. 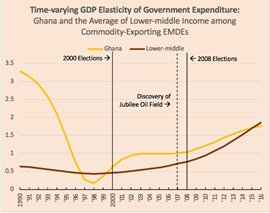 Source: Authors’ own calculations, using data from IMF (WEO). Definition of four quadrants follows the logic of the country classification of Frankel et al. (2013) in their 1960-2009 analysis. This educative but it fails to analyse the actual content of the fiscal responsibility law ant it's implication in limiting the perennial fiscal excesses.