For many economists and policy-makers, the lack of disaggregated information is a major obstacle to understanding how financial funds flow between geographic regions within a country. Most of the available savings and credit data come from macro statistics or surveys, and they only allow the study of financial systems in a broad perspective.

Fortunately, this will no longer be the case for researchers and policy-makers interested in the Mexican financial system. This August, Mexico's National Banking and Exchange Commission (CNBV), in collaboration with the Consortium on Financial Systems and Poverty (CFSP), will make public for the first time a dataset with historical information on savings and credit balances disaggregated by municipality (Mexico´s Municipalities Savings and Intermediation dataset or MSI dataset). This dataset is part of the project A Regional Approach to Financial Savings and Intermediation: Understanding the Mexican Financial System at the Municipality Level.

This unique dataset, covering the period from 2001 to 2012, is based on the administrative records contained in the regulatory reports that banks and other financial institutions file with CNBV.  The dataset classifies deposits and credit balances by type of deposit and type of credit. Additionally, it includes over 25 indicators, such as number of deposit accounts and number of branches, as well as some of the borrowers’ characteristics.

The MSI dataset also contains many of the socio-economic characteristics of the municipalities. This saves researchers the time and effort of gathering relevant indicators from different sources. The MSI data include information on number of inhabitants (by gender and age), average years of schooling, communications infrastructure and social programs, among many others. This feature of the MSI dataset facilitates a wide range of applications. Below, we briefly discuss some of the most striking results. Although preliminary, these findings give us a general idea of what analyses are possible with the data.

Savings and credit under the microscope

The role of banks and regulated non-bank financial institutions (RNBFIs)

Both savings and credit are linked through intermediation. But in all financial systems, different intermediaries coexist and compete as savings recipients or credit providers. Mexico is no exception. There are many non-bank institutions under CNBV regulation that substitute or complement banking activities. 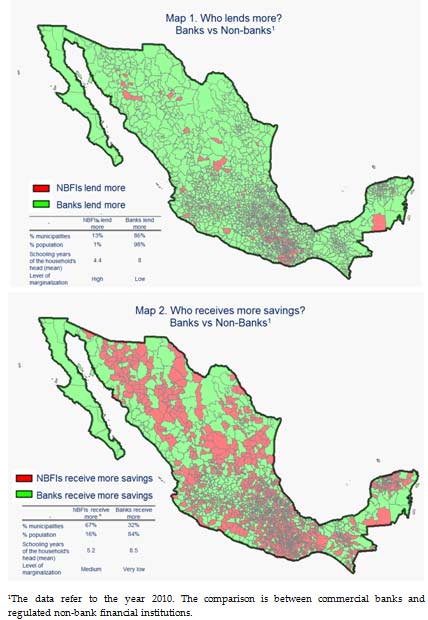 In Mexico there is a group of intermediaries that, although formally and legally constituted, operate outside the supervision and regulation of CNBV. In the past decade, the number of those institutions has skyrocketed. They have become alternative suppliers of credit to individuals, households and firms. Because they are non-regulated and non-public, CNBV does not have administrative records of these institutions. However, based on the most recent Economic Census, we estimate there are more than 5,000 NRIs excluding pawn shops.

As part of the project, CFSP and CNBV are conducting a survey of the main players in the non-regulated sector. Along with a questionnaire on outreach, performance and size, the survey includes an in-depth interview with the managers of these institutions. The aim is not just to get information about the savings they receive and the loans they grant, but to get a better understanding of their business models and other qualitative characteristics.

Two of the main tools for policy-makers should be sound data and a connection with insightful research. CNBV has formed connections with many top research organizations, like CFSP. The result of this collaboration is the MSI dataset. It is an attempt to break information barriers by facilitating a deeper and more comprehensive assessment of the evolution of the Mexican financial system at the municipality level. We hope this information contributes to the development and evaluation of public policies and promotes research on financial systems. The complete dataset, report and survey will be available this summer on the CNBV and CFSP websites: www.cnbv.gob.mx, www.cfsp.org or http://www.cfsp.org/research/research-projects/regional-approach-financial-savings-and-intermediation.