Can psychometrics help bridge the gap?

Traditional credit scores are fairly accurate in predicting future loan performance, which is why lenders have tended to concentrate on clients with already a solid credit history, as screening them is less costly. However, interest in alternative ways to identify potential good borrowers that lack credit history is growing, particularly in countries where a non-trivial fraction of the population remains unbanked.

Increased computing power and availability of big data have paved the way for new technologies that predict repayment behavior using information different from the traditionally gathered. Data from utility bills, tax payments, employment records or even mobile phones or social networks such as Facebook is currently being used to this end.

One such alternative tool developed by EFL, a fintech company founded in 2010, relies on psychometric testing.[1] Based on a personality and behavior test taken on a touchscreen device, the tool produces a 3-digit score that in minutes predicts a loan applicant’s future repayment behavior. The tool consists of a series of psychometric questions that extract attitudes that predict credit risk and future default behavior. The application extracts information on what and how the applicant answers. For example, the tool records the time it takes a client to answer each question, if a client hesitated to answer, or if she changed answers.

In a recent paper, we partnered with one of the largest banks in Peru to study the effectiveness of this tool for screening SME loan applicants. The goal of our partner bank was to expand its SME portfolio, and the EFL tool offered them an alternative option to better screen the SME segment. Their conventional screening method (which relied on a credit score from Equifax Peru and a site visit to the firm) was better suited for larger firms and resulted in a high rejection rate in the SME segment.

During the pilot, all SME loan applicants took the EFL tool and received a psychometric credit score. Applicants who achieved a score higher than a threshold set by our partner bank were offered a loan, making it possible to use a regression discontinuity (RD) design to evaluate the effectiveness of the tool.

In the six months following the pilot, we find that the EFL tool increased the probability of having a new SME loan from any financial institution by up to 19 percentage points (figure 1). This increase was even higher among applicants with thin credit bureau files, with an increase of up to 59 percentage points.

We also examine the Equifax credit score about four years after the loan application. Again, worse repayment behavior was found only among applicants with thick files (figures 2 and 3). One reason for this finding may be that even applicants with bad credit histories received loans if they had high EFL scores. 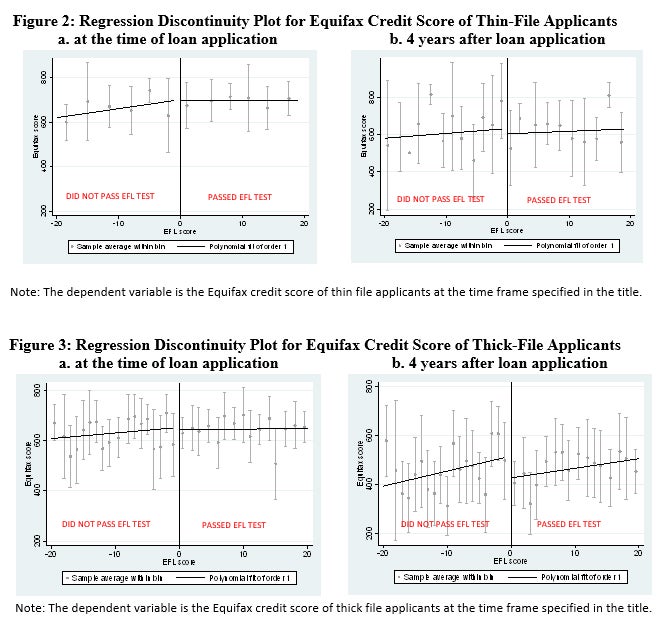 Overall, we find that psychometric credit scoring appears to be a viable screening method for loan applicants without a credit history: they are more likely to obtain loans, but do not repay worse, than under the traditional screening method. Our findings also highlight the power of credit bureau information: an applicant with a bad credit history is likely to have repayment problems in the future, no matter what the psychometric score says.

The use of psychometric tools in SME Finance and other related topics will be discussed in the upcoming Overview Course of Financial Sector Issues of the World Bank. We encourage you to click here for information about the course and how to register.
[1] While the use of psychometrics in credit scores is new, personality tests have been used widely by human resources departments to screen job candidates.
Topics
Financial Inclusion
Financial Sector