Financial inclusion in Europe and Central Asia — the way forward?

If you are unbanked there is a high likelihood you are living on the edge of poverty, exclusion and vulnerability. If you struggle to attain or maintain a secure, well-paying job, you probably do not have a bank account or access to financial services. You are completely reliant on cash, which is unsafe and hard to manage. And, should you or a family member experience a serious illness or another unexpected financial burden, you could quickly fall deeper into poverty and despair.

Unfortunately, this is the reality for millions of people in the developing countries of Europe and Central Asia. As recently as 2017, around 116 million adults in the region still had no bank account. And almost 60% of the unbanked in the region are women. In today’s highly globalized, technology-driven world, it is a stark reminder that we have a long way to go to ensuring greater inclusion and opportunities for all.

Over the past decade, account ownership has been increasing overall in Europe and Central Asia — from 45% of the adult population in 2011 to 65% in 2017 — but the data masks differences across subregions. In the high-income countries of Europe, most adults already own an account, and about 55% save formally in a financial institution. However, countries in the South Caucasus and Central Asia, despite important increases in recent years, have much lower levels of banked adults.

Armenia, Georgia, Moldova, the Kyrgyz Republic, Tajikistan, and Turkmenistan are among the countries that have seen the greatest increases globally, but they started from a very low base.

Account ownership in Europe and Central Asia by subregion 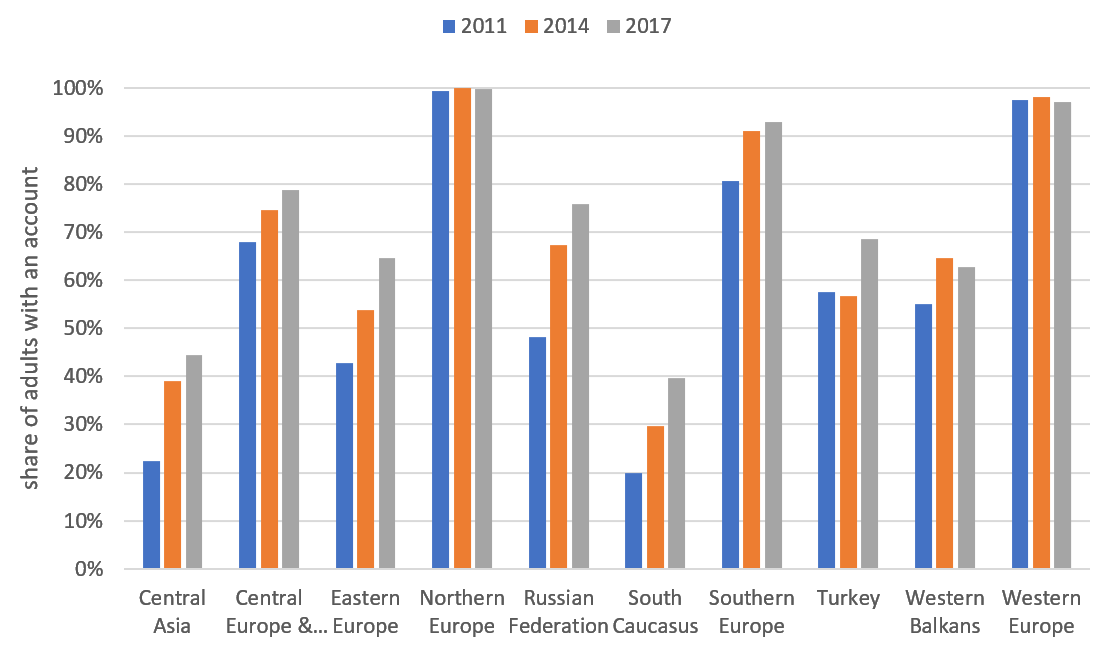 Source: Spring 2019 ECA Economic Update of Financial Inclusion based on Global Findex database. The bars represent the share of people aged 15 years and above who have an account at a financial institution or with a mobile money provider.

What are the reasons so many people in the region remain unbanked?

Lack of trust in institutions is a major issue. Almost 30% of unbanked adults in the region report lack of trust in banks as a barrier to opening an account, which is reflected in the very low level of formal savings in the region. Less than 25% of people in the developing countries of the region borrow from formal sources. As such, informal borrowing is prevalent. In cases of emergency, people rely on family and friends rather than savings or borrowing from a financial institution.

Gender gaps in financial inclusion also persist, and are especially acute in countries such as Armenia, Kosovo, Turkey, Tajikistan, and Turkmenistan. In Turkey, for example, 83% of men have a bank account, while only 54% of women have one. Being unbanked is also associated with a lack of labor force participation, which underscores the challenges facing so many women in the region with respect to participating equally and fully in business and in the economy.

What is the way forward?

Inclusive financial systems provide a high share of individuals with greater access to resources to meet their financial needs, such as saving for retirement, investing in education, capitalizing on business opportunities, and confronting shocks. Inability to use these financial services can contribute to persistent income inequality and slow economic growth.

There are many opportunities to increase account ownership. Over 80% of the unbanked in Europe and Central Asia have a mobile phone. Providing these mobile users with internet access or digital financial services could be key to expanding financial inclusion.

For governments, switching from cash to digital payments can reduce corruption and improve efficiency. Making government, private sector and agricultural payments directly into accounts would go a long way. For example, moving public sector pension payments into accounts would reduce the number of unbanked adults in the region by up to 20 million, including 8 million in Russia alone.

Technology has a huge role to play. Digital payments — such as receiving payments or transfers directly into an account, making payments over a mobile phone or using the internet, paying utility or fees directly from accounts — can drive financial inclusion, as many countries are also experiencing major advances in digitalization.

Financial services must be used responsibly, nonetheless. As such, countries need to ensure greater financial literacy among citizens and provide consumer protection safeguards. Financial services should also be tailored to the needs of financially underrepresented groups such as women, the poor, and first-time users.

As the Europe and Central Asia region grapples with sluggish economic growth and uncertain prospects in 2019-20, inclusive financial sector development can help boost growth and reduce poverty. Rapid technological advancement and interconnectivity between regions also provide unprecedented opportunities to ensure everyone can benefit from financial inclusion and therefore participate equally and fully in society. As informative as always. I am a big fan of your research.