Is Mobile Banking Breaking the Tyranny of Distance to Bank Infrastructure? Evidence from Kenya

Distance to financial services has long been a constraint for financial inclusion in Sub-Saharan Africa, a region characterized by an especially high proportion of rural dwellers. Suggestive evidence for the role played by geographic isolation in financial exclusion in Sub-Saharan Africa is provided by the new Global Findex database, which finds that rates of formal financial inclusion are considerably lower in rural areas (see Figure 1).1 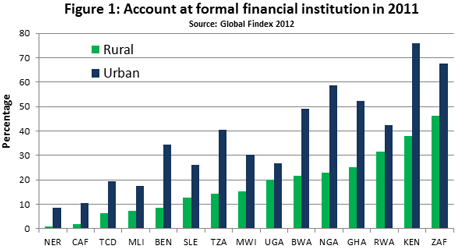 Kenya experienced significant expansion in its financial sector infrastructure over the period 2006-2008, resulting in a 46 percent increase in bank branches, from a total of 581 in 2006 to 849 in 2008.2 While there was no increase in bank branches in the north of the country, there was significant expansion into more densely populated areas in the south of the country, stretching from Lake Victoria to the port city of Mombasa. The net effect of this branch expansion, together with wider economic growth in Kenya, was to increase the proportion of Kenyan adults with access to formal financial services from 16 percent in 2006 to 24 percent in 2009.3

While penetration rates of formal banking in rural areas increased modestly from 12 percent in 2006 to 17 percent in 2009, the summary statistics suggest that the financially included resided closer to bank branches in 2009 than in 2006. More systematic analysis using a bivariate probit regression, with controls for confounding variables such as personal expenditure, wealth, education, and financial sector knowledge, found evidence for the existence of the tyranny of distance in financial inclusion. In both 2006 and 2009, distance to bank branch is a statistically significant determinant of whether an individual has a formal bank account. Importantly, no evidence was found to suggest that the expansion in banking infrastructure (2006-2008) helped overcome the tyranny of distance in financial inclusion. This is likely to reflect a combination of greater increases in financial inclusion in urban areas, the predominance of bank branch expansion in more urban areas, broad patterns of urbanization, and perhaps the increased use of M-Pesa by potential bank customers in rural areas.

The failure of the significant expansion in the Kenyan banking system to overcome the tyranny of distance to bank infrastructure is an ominous sign for the potential of branch expansion to improve financial access in low population density regions in Sub-Saharan Africa. However, if the services offered through mobile banking services such as M-Pesa are deepened, it is possible that low-income countries could leapfrog branch based banking into mobile banking in similar fashion to their leapfrog over landline telecommunication infrastructure straight to mobile phone technology.

Before taking the confounding factors into consideration, the summary statistics are in line with expectations. M-Pesa users are less geographically isolated and reside an average of 7.5km from a bank branch (non-users reside an average of 17km from a branch). However, the paper does find evidence to support the hypothesis that mobile banking in Kenya is overcoming the tyranny of distance to bank infrastructure for financial inclusion. In the main bivariate probit specification with control variables, it finds that distance to bank branch is not a statistically significant determinant of the use of mobile banking in 2009. Even before wealth and expenditure level are controlled for, larger distances from bank infrastructure do not reduce the likelihood an individual is an M-Pesa user as much as it does for formal bank account holders. As a robustness check, the analysis is repeated for a self-reported measure of time to bank branch and the results are consistent.

Further analysis on sub-samples suggests that the non-relationship found between distance or time to bank branch, and mobile banking usage is not overturned for any personal expenditure quartile or level of wealth. This provides evidence that mobile banking is breaking the tyranny of distance (or time) to traditional bank infrastructure for different economic groups in Kenya.

Finally, it is worth considering the external validity of these results. The findings may be a reflection of the market dominance of Safaricom, the mobile phone operation behind M-Pesa, and the wide network of registered M-Pesa agents across Kenya, recently estimated to be 37,000.  Nevertheless, as the reach of mobile banking expands across Africa, these findings are likely to be increasingly applicable elsewhere.

The paper is available here - http://www.tcd.ie/iiis/documents/discussion/pdfs/iiisdp412.pdf.

3 The data come from FinAccess 2006 and 2009. See the paper for the methodology and compare with the approach taken by Global Findex 2012. Thank you Michael for this great article on the impact of mobile banking in Kenya. You are correct that distance to bank infrastructure can play a role in financial inclusion. The Overseas Private Investment Corporation (OPIC) recently traveled to Kenya to monitor the performance of three financial institutions whose microfinance lending is supported by the agency. On this trip, we saw the impact mobile phones are having on banking and business in Kenya. Like you said, many banks do not have a physical presence in Kenya due to a lack of developed infrastructure. Mobile banking has worked as a bridge over the rudimentary physical and financial infrastructure that hinders Kenya’s economic growth. You can read more about OPIC’s trip to Kenya here: http://www.opic.gov/blog/opic-in-action/opic-monitoring-trip-to-kenya.