The Unbanked Four-Fifths: Informality and Barriers to Financial Services in Nigeria

Estimates from the Finscope surveys suggest that in Africa, the proportion of the population without access to formal financial services ranges from 44 percent in South Africa to 92 percent in Mozambique (see Honohan and King 2012). Nigeria, the most populous country in Africa, lies at the higher end of this scale with 79 percent, approximately four-fifths of the adult population, estimated to be ‘unbanked’.

Despite economic theory and an increasing body of empirical research suggesting that access to savings, payment, and credit services facilitates consumption smoothing, helps insure against risk, and allows investment in education and other forms of capital, little is known about the relative importance of different barriers to financial services. Disentangling the roles played by demand constraints, such as income insufficiency, poor education, informality and financial illiteracy, and supply constraints, such as distance and high cost, is a crucial first step for attempts to design effective policies to broaden the reach of formal financial services.

In a recent paper a framework for understanding the barriers faced by individuals availing of formal financial services is developed. The framework classifies a series of non-mutually exclusive self-reported supply and demand barriers derived from respondent answers to the 2009 FinScope Nigeria survey. Figure 1 summarizes the responses under this framework and shows that poverty, cost, distance, and financial illiteracy are the four most important constraints cited by respondents. 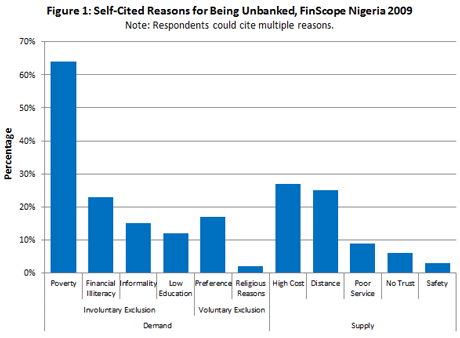 The fifth most important barrier to financial inclusion is individual level informality, a constraint cited by 15 percent of the unbanked population in Nigeria. Respondents who cite informality reasons for financial exclusion tend to be more educated and rurally based but do not display any greater levels of informality than the wider unbanked population. This suggests that education helps individuals understand the role played by formality in access to banking services and, as a result, it is reasonable to conclude that informality is an unnoticed constraint for many other respondents. In the Finscope Nigeria dataset, the unbanked population has an average of 0.94 formal documents in their name, compared with 2.95 for the ‘banked’ population. The average Nigerian holds 1.33 formal documents, not sufficient to open a bank account. The list of formal documents used to create this variable includes an electricity bill, a water bill, a municipal rates or taxes invoice, a telephone bill/account, a lease or rental agreement, a tax return, an insurance policy document, a national identity card, an international passport, a pay slip, land ownership documents or house ownership documents.

Why is informality an important factor in financial exclusion? Beck, Demirguc-Kunt and Martinez Peria (2006) estimate that the number of documents needed to open a checking account in Nigeria is high, at 3.66 official documents, the ninth highest of the 54 developing countries surveyed. This stands in contrast to the challenges of acquiring official documents in Nigeria. According to Davis et al. (2005), passports are issued only for approved travel purposes in Nigeria. Furthermore, driving licenses are available only to drivers, and proof of a registered residential address eludes the population living in rural areas and in informal settlements.

While informality is likely to be related to low income, low education and distance from administrative centers for many, it is arguably a distinct form of poverty. Individuals in the informal sector may enjoy reasonable levels of income, send their children to school and yet not be particularly formalized. This may be due to recent migration; weak institutions where either the state fails to deliver opportunities to formalize in the form of land rights, voter registration cards, etc.; or a preference on behalf of the individual to avoid labyrinthine or dysfunctional institutions. In addition, hierarchical household structures may lead to a low number of official documents for non-head of household members.

In this paper, I use a probit model to understand the role played by informality in financial exclusion and the results confirm a statistically significant role for the number of formal documents. To overcome the likely endogeneity, two instrumental variables are employed. Controlling for heterogeneity at the local state and local government area levels and using instrumental variables, evidence is found that the number of official documents plays a significant role in the likelihood of being banked. The result is particularly strong for individuals around the threshold of four to five formal documents who can be considered on the cusp of financial inclusion. When an individual possesses four and five documents, an additional document increases their probability of being banked by 17 percent and 15 percent, respectively.

These results suggest that the financial inclusion agenda should place some emphasis on relaxing documentary requirements for banking products, while remaining cognizant of possible changes in customer risk profiles, and look for opportunities to help individuals to formalize. Finally, as this paper quantifies the role played by individual level informality in financial exclusion using a large cross-section dataset, opportunities remain to further investigate the dynamics of this relationship using other approaches.

The paper is available from this link. This is an excellent paper and quantifies what practitioners like me have long believed that informality is another form of poverty. In our work the direction we have taken though is to actually not ask the regulator to dilute the documentary requirements in order to get, for example, a no-frills-account (which further darkens the taint of informality) but to stress the other lever that you mention -- working with local governments make it possible to remove the taint of informality entirely and get a proper bank account or a pensions account or a money market mutual fund account. This is harder but fits more broadly into a framework that seeks to gradually replace informal and high risk providers such as money lenders, chit funds, and self-help groups with more formal and full-service providers of regular financial services. The fear is that otherwise you remain permanently confined to the informal sphere and having accomplished minimal financial inclusion the attention of regulators and governments moves on to deal with other problems. The whole UID effort in India is also something that seeks to do just this -- remove the taint of informality entirely and permanently from every citizen of India.

I would be eager to hear your comments on this perspective.